While Intel's (NASDAQ:INTC) applications processors have had limited success in smartphones, its modem offerings are looking more robust by the day. Indeed, after getting the boot from Samsung's (NASDAQOTH: SSNLF) Galaxy Tab 4 (and with Intel essentially confirming that Samsung isn't likely to be a meaningful tablet apps processor customer), it's interesting to see that Intel has indeed found a home inside of a Samsung product; its XMM 7160 LTE modem powers the just-announced Samsung Galaxy K Zoom.

Why no Qualcomm?
In many of Samsung's products, Qualcomm (NASDAQ:QCOM) is usually given the honor of not only providing the cellular baseband but the apps processor, the power management IC, audio codec, and the power management IC. Now, Samsung does its own apps processors internally but these don't integrate a baseband, thus necessitating a discrete solution. Interestingly enough, Intel seems to be the "winner" in these models.

What's interesting is that Qualcomm, which also provides stand-alone cellular modems, doesn't seem to win too many sockets at Samsung that require a discrete modem. While there's no denying that Qualcomm's modems are fantastic, Intel's wins -- however low volume for now -- are a testament to the legitimacy of Intel's product and willingness to be aggressive on pricing. Further, as a device vendor first, Samsung has every interest in diversifying its supply chain to get good pricing and mitigate risk.

The "ramp"
At Intel's most recent investor meeting, the company spoke about how its multi-comms revenue (which consisted primarily of 2G/3G modems) was likely to through by Q1 of 2014 and then would rebound throughout the year. It is unlikely that it would have given the forecast that it did in the chart below if it didn't have some visibility into the design wins and the rough popularity of the sockets that the chips were winning. 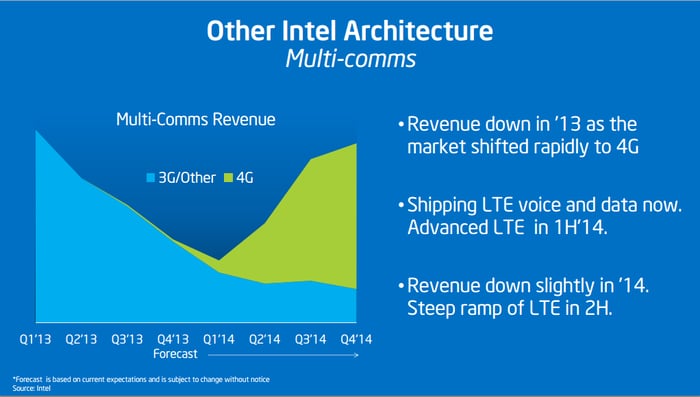 While this isn't exactly Samsung's highest volume runner, the ramp implies that Intel has some other big wins (perhaps with its next-generation XMM 7260) in the pipeline. Perhaps the Exynos-powered variants of the Galaxy S5 and the upcoming Galaxy Note 4 may sport Intel modems. And -- this is a bit more farfetched -- Apple may decide to diversify its supply chain as well by adopting Intel's LTE modems in regions that don't require CDMA support (which is exclusive to Qualcomm's modems).

Foolish bottom line
Intel's modem efforts are getting more impressive by the day and, frankly, it's surprising to see that XMM 7160 is gaining as much traction at Samsung as it is. The first public Samsung design was the Korean version of the Galaxy Note 3 Neo and now the Galaxy K Zoom also has this modem inside. If the XMM 7160, which was a good -- but not spectacular -- modem, is gaining this much traction, then it'll be very interesting to see how XMM 7260 fares in the market later this year.