J.C. Penney (OTC:JCPN.Q) has earned such adjectives as beleaguered and drowning over the past couple of years. However, it wasn't so long ago that the century-old chain was holding its own next to competitors Macy's (NYSE:M) and Nordstrom (NYSE:JWN). What happened? J.C. Penney's management woes doomed the company's gross profit margin. Could J.C. Penney right that wrong in the near future? That is the question all J.C. Penney investors need to ask. Here's why.

J.C. Penney's key problem ties into its promotional activities. Everyone loves a blowout sale -- except investors, especially if margins take a hit. Analyzing retail stocks can involve a wide range of metrics from comparable-store sales to consumer spending to inventory turnover. However, investors also need to look at how often a store relies on promotions and what that means for profit in the long term. This holds especially true in the fiercely competitive landscape of department stores that might also have inventory-turnover issues.

Are promotional activities a necessary evil that put Macy's and Nordstrom in a similar vice? Or does J.C. Penney have additional problems of its own?

Calculating gross profit margins
To understand J.C. Penney's problem, it's first important to know how to calculate the underlying metric.

To calculate gross profit, subtract cost of goods sold, or COGS, from revenue. Take the answer from that equation and divide by the company's revenue then multiply the result by 100 to form a percentage and that's the gross profit margin. The gross profit margin shows the amount of profit per $1 of product sold after all of the costs of the sale are stripped away.

A higher profit margin leaves enough money around to trickle down as net income. A lower profit margin can come to negatively offset metrics such as comps and revenue growth.

Companies disclose their final gross profit margins in their earnings releases. Find those numbers and compare them between companies in the same industry to get a better idea of a particular business's potential profitability.

So which department store has the best profit margin?

Macy's has the highest profit margin
Here's a look at the quarterly gross profit margins of the three department store chains over the past five years. 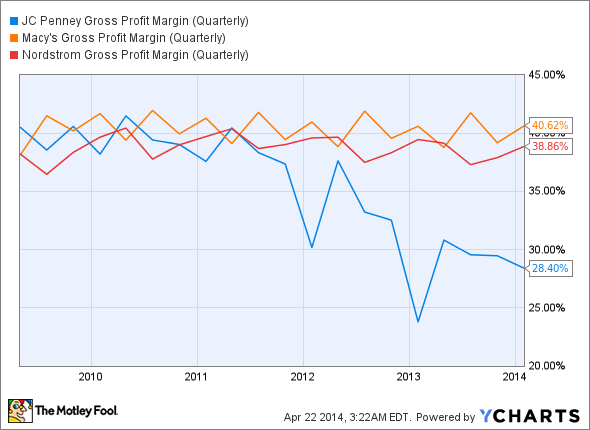 Five years ago, the gross profit margin lines for the stores were all bumping into each other. Macy's and Nordstrom have continued to show this trend as J.C. Penney took a steep dive downward.

Why has Macy's stayed mostly on top of Nordstrom? Macy's has higher revenue because it has more stores -- and that lead is significant enough to offset the company's inventory outstanding problem. The company reported nearly $28 billion in sales during 2013 and it operates over 800 stores. Nordstrom took in $12.2 billion of revenue in 2013 with 260 physical stores.

Where does J.C. Penney fall in this mix? 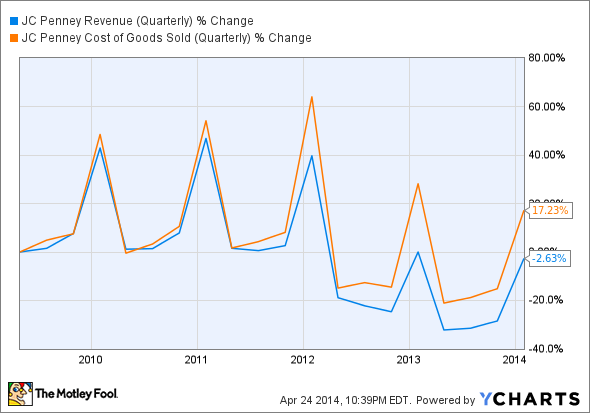 The gap between COGS growth and revenue growth has grown in the past two years -- unfortunately in favor of COGS. What happened?

This was the time-frame when Apple's Ron Johnson was brought in as a new CEO who was meant to completely reinvent the sagging, century-old chain. Johnson had big plans that included a stores-within-stores concept and those plans required some major inventory overhauls. J.C. Penney could've managed the rising inventory costs if revenue had gone along for the ride. However, customers turned away from Johnson's concepts -- and his attempted discontinuation of the chain's generous promotional events. So Johnson was let go and Myron "Mike" Ullman returned as CEO.

Ullman had the unenviable task of fixing Johnson's changes in midstream. J.C. Penney was forced to use steep markdowns to move the increased but unpopular inventory that wouldn't move off shelves otherwise. However, Ullman promised that the excess inventory would clear out before the spring and that was supported by the company's latest earnings release.

Now J.C. Penney has to carefully find its footing. Revenue needs to improve but that's going to require more short-term costs in carefully selected inventory and strategic promotional events. J.C. Penney has to stick with the promotions since the company has a long track record of offering coupons and sales events. However, it's vital that the company comes back to balancing those promotions with revenue-boosting inventory.

Foolish final thoughts
Gross profit margin helps investors differentiate between competitors in the same industry -- but only when investors check the details. Macy's only beats Nordstrom because of its size as the latter is actually the more secure company. J.C. Penney has only run into serious problems in the past couple of years, but now it has moved into an important rebalancing period that could push its margins back up toward those of its competitors.