Few topics invoke as much emotion as suggesting success is caused by anything other talent and hard work. "Luck" is a four-letter insult to those working 80 hour weeks. No one doubts that working hard is key to success, and the harder the work, the more success.

But people play the game on completely different fields. There is no point ignoring something we know to be true. And the truth in America is that few things as predictive of how well you'll do in life as how much money your parents make.

Several readers were skeptical with that statement, and asked me to back it up with facts.

The General Social Survey has tracked thousands of Americans since 1972. It's the best database available to look at social trends across different generations.

I used its public database to look at the highest degree people had earned, and what their household income was when they were minors living at home -- hence their parents' income.

Here are those who never earned a high school diploma: 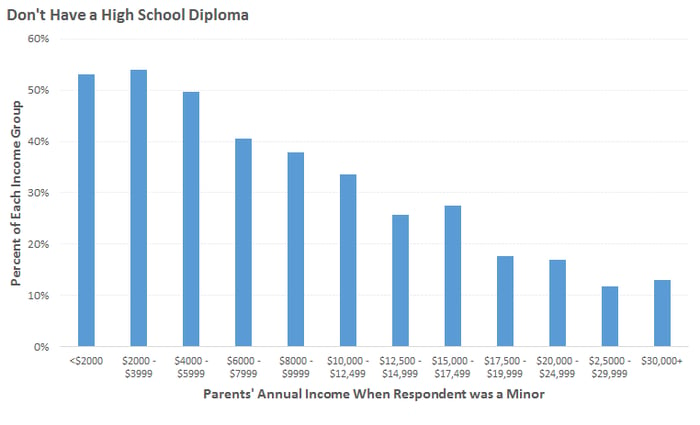 Here are those who earned a bachelor's degree: 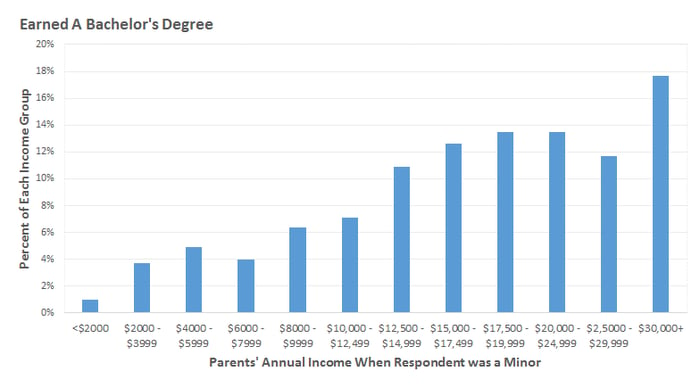 And those with a graduate degree: 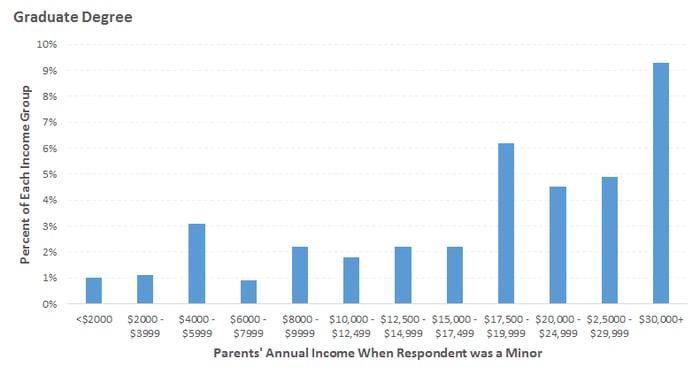 There are always outliers in the economy, people who dropped out of high school and became rich. But on average, how much money you make is heavily tied to your level of education. And in short, this data shows:

You don't get to pick your parents, but your parents' income has a huge impact on your educational attainment, and hence your future income. I don't know why that is – it's likely a mix of cost and culture -- but it's true. And as long as it's true, a large portion of an average person's income is tied to something they have no control over.

This goes deeper than just the type of degree you get. A 2011 study of 20 elite universities showed that having a parent who went to a particular school made you 45.1% more likely to be admitted to that school. Another study by Thomas Espenshade of Princeton showed that having an alumni parent of a specific school provided an admittance boost equal to 160 SAT points. Harvard's newspaper, The Crimson, reports that the school's "acceptance rate for legacies has hovered around 30 percent—more than four times the regular admission rate."

As I wrote last month, shaking your head at these numbers isn't about jealousy. These numbers are a shame because of lost potential and misallocated talent.

How many poor inner-city kids could be brilliant computer programmers if given the chance? Probably a lot. Uneducated people can do amazing things when given the chance. Two years ago, a foundation left a crate of tablets for kids in an Ethiopian village. As The Register reports, "within five months, they had hacked Android."

And how many people are in positions of power – CEOs, managers, bankers, regulators, and politicians –not because they're gifted, but because their parents were able to provide a great education?

If you could design a system from scratch, you would want a pure meritocracy, where the smartest, hardest-working, most creative, and honest people have the best shot at making it to the top. You would probably hate the thought of the best educations being awarded overwhelmingly to the richest families. You would probably cringe at the idea of the best colleges giving preferential treatment to students with alumni parents. You would never consider this the most efficient way to allocate talent. But it's what we have.

A hundred years ago, America figured out that a high school education was important enough to guarantee it to everyone regardless of income. We figured this out before most of Europe, and it's been credited as one of the reasons America dominated the 20th century. Given how important knowledge is in today's economy, I have a feeling whoever figures out the public importance of college and trade-school education will dominate the 21st century. Right now, that's not us.