Nucor Corporation (NYSE:NUE) is in a pretty ugly business right now, as foreign steelmakers continue to pour more and more product into the U.S., even as demand remains somewhat muted. As Fool analyst Brendan Mathews put it, imports have made up 36% of the market in 2014, versus 25% five years ago. With even more pressure on domestic steel producers, making a buck in the downside of the industry cycle is getting even harder, when it should be getting easier as the economy slowly improves. With the first quarter's earnings now out, what should investors know about Nucor, and international giant ArcelorMittal (NYSE:MT)? Is it time to buy? Should current shareholders sell, or hold for now?

Profitable dividend payer, even in the squeeze
While competitors like ArcelorMittal have struggled in the downturn, Nucor has managed to continue operating profitably: 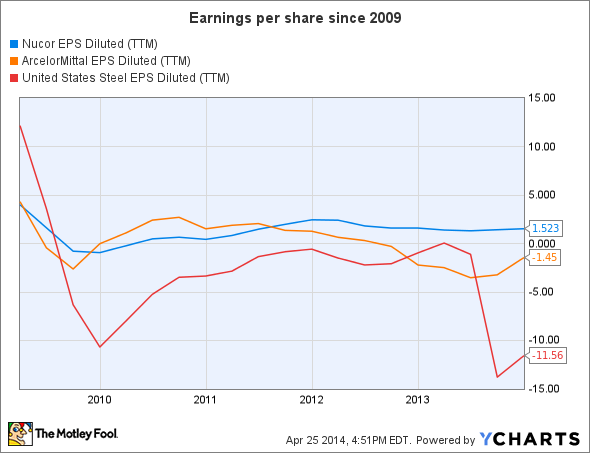 Nucor has maintained relatively steady profits since the effects of the recession began affecting the steel market. Combined with what most executives in the industry say is illegal dumping of steel into the U.S. market by Chinese steelmakers, domestic producers are feeling a "double-whammy." Steel plants have very high fixed costs, meaning that every unit of steel costs notably more to make when steel mills are operating at the low levels of utilization we're seeing today. Mixed with the artificially lower prices of illegal imports, steelmakers are being squeezed on both sides.

You can see in the preceding table what that's done to Nucor's competition.

Leveraging operational efficiency and financial strength to grow bottom line
Even as imported steel takes market share, Nucor keeps making the most of the market conditions. The company grew earnings 35%, from $85 million a year ago to $111 million this quarter. Total sales grew at a slower level -- 11% -- showing how important increasing operating rates are to profitability. Nucor's operating rate increased from 73% a year ago, to 75% this quarter. But just as importantly, Nucor demonstrated how its financial strength, which leads to the company's ability to invest in its business during a cyclical downturn, positions it to seize market share in more profitable and high-demand segments of the market. CEO John Ferriola, from the earnings call (emphasis mine):

In the first quarter, our Nucor Steel Hertford County plate mill shipped a record 56,000 tons of value-added plate products. During the downturn, Hertford County invested in a heat treat facility, a vacuum tank degasser and a normalizing line. These investments continue to pay off for us, with the higher and more stable margins offered by heat-treated products. Our expanded plate portfolio also has allowed us to increase capacity utilization at our Tuscaloosa, Alabama, mill by more efficiently distributing work between our two plate mills. Not coincidentally, Tuscaloosa set a new quarterly shipment record in the first quarter of 2014.

Simply put, investing in new capability at one plant actually led to increased capacity utilization in another facility as well.

ArcelorMittal facing another double-whammy
ArcelorMittal is an integrated steelmaker and iron miner, meaning the impacts of a cyclical downturn can be twice as painful. The fixed costs of operating mines and steel mills gets hit with reduced demand for raw iron and finished steel products. However, ArcelorMittal's management team has done an admirable job of balancing fixed costs and cash generation: 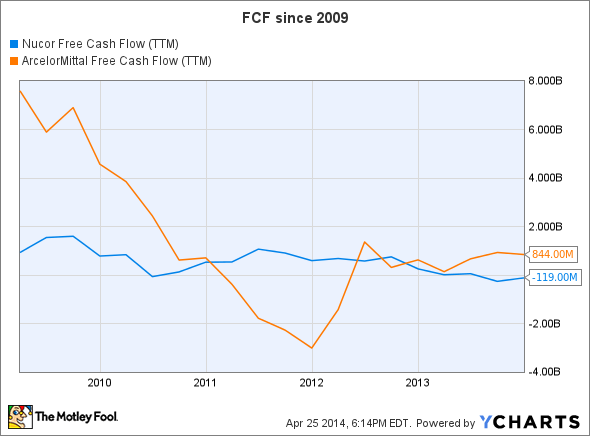 Even though it reported a net loss of $2.5 billion in 2013, ArcelorMittal generated positive free-cash-flow. This was largely a product of management's making hard decisions, such as mothballing and idling production facilities to reduced fixed cost as the market downturn remains protracted in Europe, one of Arcelor's largest markets. Much of the large loss that ArcelorMittal has taken over the past couple of years is due to non-cash writedowns related to asset optimization.

On the February earnings call, CEO Lakshmi Mittal stated that by the end of 2014, the company would have implemented improvements that provide $2 billion in annual savings, and that the company had also reduced its net debt (total debt minus cash) to the lowest levels since the company was merged together in 2006. This is a significant step back toward profitability.

Buy, sell, or hold?
Nucor is absolutely a cut above, as management has shown through its ability to both invest in the business in bad markets, while continuing to pay a dividend, and remain profitable as well. This is the kind of company that's worth holding for decades. ArcelorMittal looks like it is turning the corner and positioning itself, but with less exposure to the U.S. market (though management is working to change this), it could take longer for its core markets to recover.

Bottom line: Neither is a sell today, and if you're an owner, I'd hold on tight. Looking to buy? Both are quality companies and worth taking a hard look at, but take your time and study up on them both first. The fact is, you'll probably have plenty of time to invest in either before the steel market really recovers. Understand the businesses and the industry, and you'll make a better decision that won't keep you up at night.