This market is insane. T-Mobile (NASDAQ:TMUS) just reported stellar subscriber additions, leaving both Verizon (NYSE:VZ) and AT&T (NYSE:T) eating dust. The scrappy wireless carrier is gearing up for a merger with Sprint (NYSE:S), which would finally add a third national carrier with the scale to compete against Big Red and Ma Bell. And yet investors in the two giant telecoms blissfully ignored the pile of fresh threats, trading both stocks roughly in line with the Dow Jones Industrial Average (DJINDICES:^DJI) today.

To make any sense of this strange nonreaction, you'd have to assume that AT&T and Verizon investors have accepted this new reality and aren't surprised by any new bumps in the road.

And maybe that's the case. After all, Sprint and T-Mobile have absolutely demolished their bigger rivals' returns over the last year. There's even a simple rule of thumb you can memorize: major carriers trail the Dow, while smaller networks tend to beat it. See if you can't sing that ditty to the Michael Jackson melody of your choice. 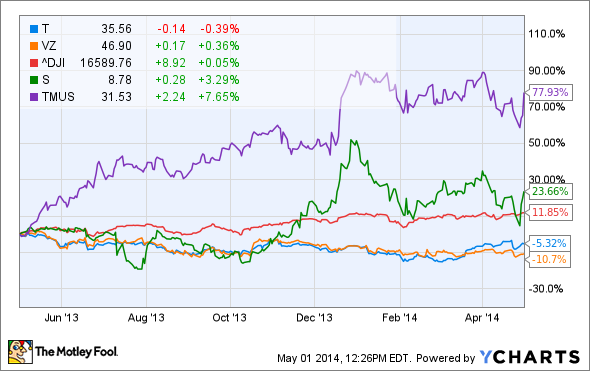 But even that pragmatic explanation doesn't really hold water. After all, both Sprint and T-Mobile investors have enjoyed at least a 6% surge in less than two days here, while the majors simply traded sideways along with the Dow.

If these news items were important enough to add nearly $4 billion to the two mini-majors' combined market cap, in a market that is often seen as a zero-sum game with every winner matched to a corresponding loser, how come the two Dow members also added more than $1.1 billion to their combined market value?

Let's be clear. T-Mobile is busy stealing customers from both AT&T and Verizon. Sprint is running fewer daring trick plays, but has the financial backing to make things happen. Put these two together, and sparks should fly. Verizon and AT&T would be the ones getting burned, if and when that happens.

This window display is the stuff of nightmares for Verizon and AT&T. Don't let these symbols move any closer!

Maybe the Dow's telecom investors are choosing to ignore this latest flurry of threatening developments, and above all else, pretending that the brewing T-Mobile and Sprint merger won't pass regulatory review anyhow.

That may very well be the case, since there are no sure bets when you're relying on courts and regulatory bodies to make the right decision. But this is also nothing like AT&T's failed T-Mobile takeover in days past. The old deal would have reinforced an established industry giant, while this one promises to reinvigorate the wireless market with high-stakes competition.

The ostrich solution won't work this time, guys. Verizon and AT&T shares should have fallen hard today and they didn't. Count your blessings and start thinking about other places to park the cash you've invested in AT&T and Verizon.