While lung cancer is particularly common, the ALK-positive variation isn't. NSCLC accounts for 85% of all lung cancer cases, but just 2% to 5% of those cases are ALK positive. Because the FDA has given the go-ahead for this new treatment, let's take a closer look at how it may impact Pfizer (NYSE:PFE), which markets Xalkori, the only other approved ALK positive NSCLC drug, and let's also evaluate Zykadia's potential impact on Novartis sales. 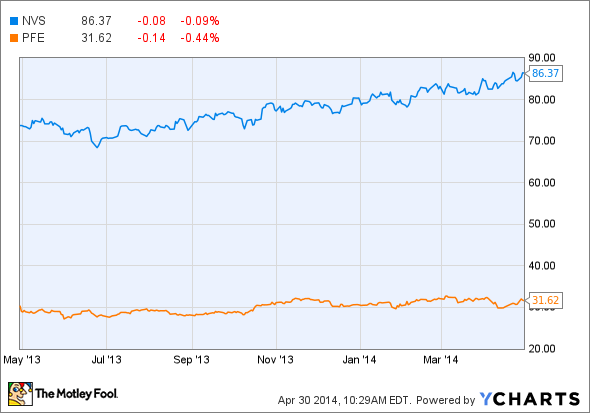 Second line only
Pfizer's Xalkori won FDA approval back in 2011 following Pfizer demonstrating that the drug doubled progression-free survival rates versus placebo in ALK positive NSCLC patients. As a result, Xalkori has become the standard of care for ALK positive patients, and its sales have climbed sharply. While we won't know how much Xalkori was sold in the first quarter until May 5th, when Pfizer reports earnings, Xalkori's sales grew 129% from 2012 to $282 million in 2013. That growth came thanks to Xalkori winning approval in more than 70 countries.

For now, Xalkori's market share is likely to remain intact given that Xalkori is approved as a first-line ALK positive NSCLC treatment, and Zykadia's approval is as a second-line therapy for patients who have already taken Xalkori, and whose cancer has progressed. While that's a smaller patient pool, the drug's impact on patients shouldn't be diminished. In trials, Novartis gave Zykadia to 163 patients whose disease had progressed following treatment with Xalkori, and about half of those patients saw their tumors shrink.

A big and important market
Every year, more than 220,000 Americans are diagnosed with lung cancer, and sadly, more than 150,000 lung cancer patients die from the disease. That makes lung cancer the second most-common cancer in men and women, and the leading cause of cancer death in the country.

Fortunately, the number of new cases and deaths has been falling during the past decade thanks to advanced cancer screening, public education surrounding the causes of lung cancer, and improving treatment. However, despite the progress, there remains significant room for improvement given that five-year survival rates remain below 20%. That number becomes even more concerning when we recognize that lung cancer is far more common in the elderly. That means that aging baby boomers are likely to increase the total number of new cases as they reach retirement age.

Currently, about 10,000 baby boomers are turning 65 every day, and roughly two out of every three newly diagnosed lung cancer patients are age 65 or older, according to the National Cancer Institute. Because there are nearly 80 million baby boomers in the United States representing more than a quarter of the country's population, the need for drugs like Xalkori and Zykadia is likely to remain high.

Fool-worthy final thoughts
Drugmakers have plenty of incentive to innovate new lung cancer treatment given that U.S. spending on lung cancer totaled more than $12 billion in 2010, and is projected to grow to as much as $18 billion by 2020. How much of that market Zykadia will capture remains to be seen.

Given the number of lung cancer cases annually, and the percentage of those diagnosed with the ALK version of the disease, roughly 9,500 people are diagnosed with ALK positive NSCLC every year; however, most of those patients will be treated with Xalkori first. So there's definitely an opportunity here, but how much is hard to say for now.