Semiconductor maker Broadcom (NASDAQ: BRCM) separates its business into three segments: infrastructure and networking, broadband, and mobile and wireless. As Broadcom reported its first-quarter earnings, it's clear that the first two segments are doing well, while the third, which has traditionally been Broadcom's largest and most important business, is struggling. Can Broadcom turn this around, and is this an opportunity to invest in the company?

The growing segments
Broadcom's star performer over the last year has been its infrastructure and networking division, with 12% yearly revenue growth and a 31% operating margin, the highest among Broadcom's three main segments. The reasons behind this were the growth of business from service providers, particularly in China, as well as increased spending in data centers as companies move to cloud computing. Broadcom estimates that revenue for the infrastructure segment will continue to increase in the second quarter.

The broadband segment has also been doing well, with 13.5% year-over-year growth in the first quarter. Broadcom is expecting continued growth here, due to the spread of HEVC, a compression technology that reduces video sizes by half, as well as the possible growth of the ultra HD television market.

The size and importance of the networking and broadband segments at Broadcom have been increasing, combining for 52% of revenue and 77% of operating income in 2013. But wireless and mobile have traditionally combined to be Broadcom's biggest and most profitable market. How is that doing?

The big cellular question mark
Within its wireless and mobile segment, Broadcom provides two types of solutions. The first is connectivity, such as Wi-Fi and Bluetooth The second is baseband, or cellular modems that sometimes also include application processors. Broadcom has traditionally been strong in connectivity, serving Apple and Samsung, but it has been trying to catch up to Qualcomm in the emerging 4G LTE baseband market in order to expand its revenue as well as to protect its connectivity business.

In 2013, wireless and mobile revenue grew by only 3% over 2012, while the resulting operating income decreased by 35%. In the first quarter of 2014, the segment recorded a 15% year-over-year revenue decrease and recorded an operating income loss of $32 million. Clearly, this is a very bad trend for Broadcom and its investors. What's going on behind the scenes?

First, according to management, Broadcom has lost some connectivity business in low- and mid-level markets. Second, pricing pressures in the 3G baseband market have decreased the revenue and profitability of Broadcom's 3G solutions. Third, Broadcom has been investing heavily in order to enter the 4G LTE baseband market, both by internal research and development and by acquiring assets from Renesas Electronics Corporation in September of last year.

The upside is that the first Broadcom LTE chip will be included in a mid-range Samsung phone that's set to be released soon. Also, management says that other design wins should begin to roll out in the second half of this year. Given a favorable demand for smartphones, both connectivity and baseband could start growing again.

Is this a good time to buy? 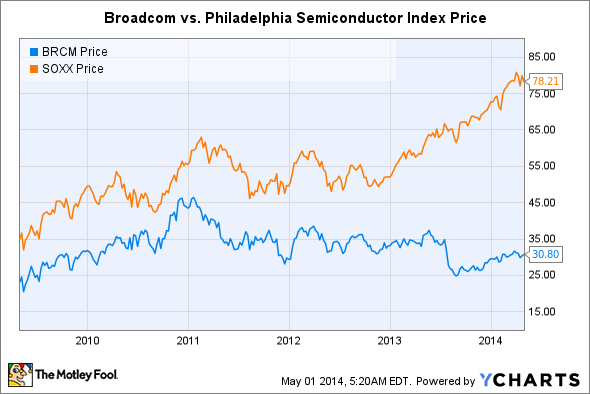 Broadcom is part of the Philadelphia Semiconductor Sector, an index of 30 semiconductor companies. Broadcom's stock price was moving closely with the index until the beginning of 2013, when the index began a steady climb while Broadcom's share price stagnated and then dropped. It's not surprising that this coincides with the decrease in mobile and wireless profits.

As explained above, Broadcom has been investing in LTE and expects to see increasing revenues starting in the second half of 2014. If this in fact happens, Broadcom's share price will likely also go up.

On the other hand, if things don't go as well as hoped, it might be time to consider pulling out of the baseband market, or even more drastically, out of cellular altogether. This is exactly what some analysts have been calling for, arguing that selling off the mobile and wireless business would make Broadcom a smaller company, but one that's more valuable to investors. Broadcom's management has not yet been engaging in this discussion, simply stating that they will do business wherever they think that they can make money.

In conclusion
Two of Broadcom's main segments, broadband and networking, are doing well. The third, mobile and wireless, has been a cause for concern, as revenues have been decreasing and costs increasing.

If Broadcom's strategy of investing in LTE technologies works out, the share price will likely go up. On the other hand, if the strategy doesn't pan out, there's a chance that Broadcom might eventually sell off some or all of its mobile business, making it a smaller, but more profitable company. At its current low price, Broadcom's stock is definitely worth a look in either case.