Is it meaningful, or just another random walk down Wall Street? 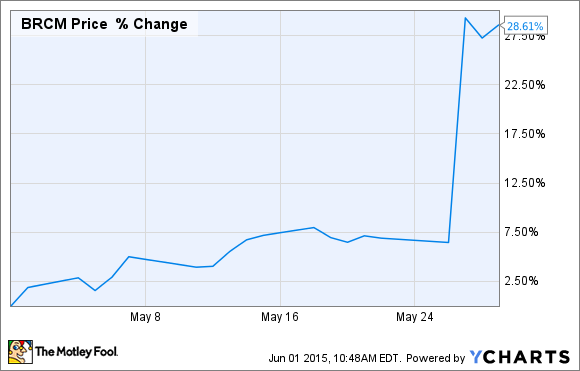 What: Shares of networking and communications chip designer Broadcom (NASDAQ: BRCM) soared 29% higher in May, according to S&P Capital IQ data. Though the stock started the month in fine form, most of the jump came in a single shot when industry rival Avago Technologies (AVGO 2.52%) announced its intention to merge with Broadcom.

So what: In a blockbuster $37 billion deal, Avago is paying a large buyout premium to create a brand-new titan in the semiconductor sector. The combined company's total enterprise value should rise all the way to $77 billion. That would be the third-largest company value in the industry, behind only mobility specialist QUALCOMM at $99 billion and PC-and-server titan Intel's $160 billion.

Now what: Avago hopes to unlock value through increased economies of scale, following in Qualcomm's and Intel's huge footsteps. Putting Broadcom together with Avago is kind of like adding peanut butter to chocolate, with very little direct overlap between the two business flavors but plenty of potential benefits.

Of course, it's up to Avago and Broadcom to follow through on these promises. Some mergers do deliver big cost savings on top of increased market efficiency, which is exactly what the merging partners are aiming for here. But there ain't no such thing as a free lunch, and I'm not at all convinced that this deal was the right way forward for acquisition-hungry Avago.

But Broadcom investors enjoyed a quick 29% gain in May on this news, and Avago shares also soared 27% higher. If nothing else, this event gives current investors who don't believe in the business combination the option to cash out at all-time highs.