Ignoring the fallout Smith & Wesson Holdings (NASDAQ:SWBI) endured decades ago after announcing plans to develop a so-called "smart gun," one that will only fire by its recognized owner, a Maryland gun dealer recently tried to offer one for sale. After suffering a massive backlash from gun owners for doing so, he subsequently withdrew it from market.

It's not the gun itself that brought gun owners out in force against the dealer, just as they had done in March to a California dealer that also attempted to offer the gun for sale, but rather fear of the cascading effects such sales would have on further erosion of Second Amendment rights.

New Jersey, for example, passed a law stipulating that within three years of when a smart gun goes on sale anywhere in the U.S., that will be the only type of gun allowed to be sold in the state. Had the Maryland or California gun shop owners successfully started selling the gun, it was feared that New Jersey's law would trigger.

Yet both dealers should have known that in the increasingly hyperpartisan debate over gun control, gun owners are, well, gun-shy over measures that are seen as a camel's nose under the tent toward greater regulation, registration, and outright bans.

Back in 2000, in a self-serving bid to fend off the wave of lawsuits that were being filed against gunmakers trying to hold them liable for crimes committed with their guns, Smith & Wesson (which was owned by the U.K.'s Tomkins PLC at the time) signed an agreement with the Clinton administration to explore smart gun technology, such as "ballistic fingerprinting" and biometric identification, just like the Walther PPK/S that Q gives James Bond in the movie Skyfall -- its grip "recognizes" Bond's palm, allowing only him to fire it.

Smith & Wesson, though, was the only gunmaker to sign on to the deal, and Beretta presciently predicted that its rival would lose market share. Indeed, sales of Smith & Wesson firearms plunged more than 40%, it closed factories and laid off employees, and Tomkins ended up selling the gunmaker for just $15 million, a fraction of the $112 million it had paid just a few years before.

Colt Industries faced a similar boycott when it developed the Z-40 that contained an RFID chip and a wrist transponder.

In theory, a smart gun could help reduce crime and accidental deaths. The .22 caliber iP1 handgun by German gun manufacturer Armatix will only allow the weapon to fire after an unlocking code is recognized by an RFID chip via a wristwatch the owner wears. Thus a criminal who stole the gun and didn't know the PIN code would find the weapon useless. A child wouldn't be able to pick up the gun and accidentally discharge it.

Smart-gun proponents like to point out that James Bond was saved in the movie by his fancifully equipped gun after the villain tries to shoot him with it. Yet it's noteworthy that in promo photos for the movie, Bond is shown holding his Walther wearing gloves, which wouldn't have allowed him to shoot, as the grip wouldn't "recognize" him (in the movie he doesn't actually wear the gloves), and he's also saved from certain death by killing two additional assailants by taking their "dumb" guns and shooting them.

In real life also, smart-gun technology renders the gun useless to someone who's not its owner but who is confronted by an armed assailant or, worse, one with murderous intent.

While fear of gun control is partially the reason there's been an overall increase in gun sales overall, it's mostly concern about crime that's driven sales. According to a Gallup poll last October, far and away the most common reason a person owns a gun (60%) is for personal safety and protection. At 36%, hunting is the next most common reason for gun ownership, with just 13% saying it's for recreation or sport.

It's also true that while both Smith & Wesson and Sturm, Ruger (NYSE:RGR) are reporting record gun sales still, even though the greatest wave has subsided, violent crime is on a protracted decline. According to the most recent statistics from the FBI, violent crime in the U.S. fell by 5.4% over the first six months of 2013 while background checks conducted by the agency before a person can buy a gun were at their highest levels ever. Moreover, where gun ownership is greatest (the Midwest and South), violent crime has fallen the most. 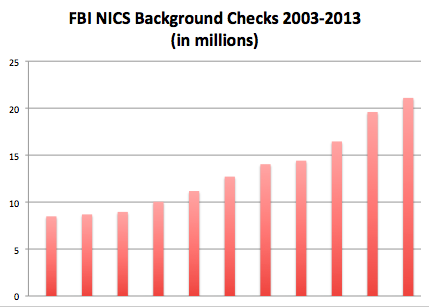 Like Smith & Wesson before him, the Maryland gun dealer felt he was placed in the untenable position of having to offer smart-gun technology to remain solvent, only to find the harsh reality that responsible gun owners don't want the technology. Because it's largely not needed and it represents a slippery slope for registration, tracking, and restriction, gun owners will withhold support from those who try to introduce it, making it unwise to try to force it on them.