The beverage industry has evolved to become more diversified than ever before. It has developed from offering carbonated soft drinks to offering a wide variety of products such as energy drinks, juices, and even bottled water. In fact, PepsiCo (NASDAQ:PEP) has diversified into snacks as well, expanding into the food business.

If someone considers this industry an interesting investment proposition, it is important to first understand which kind of player to bet on. On one hand, companies such as Dr Pepper Snapple Group (NYSE:DPS) are limited to the U.S. and the Mexico region, whereas Coca-Cola (NYSE:KO) is the market leader with a strong global presence. Furthermore, PepsiCo has a more diversified portfolio and is thus less affected by headwinds in this industry.

A peek into the past
If we consider the stock price performance of each of the players, Dr Pepper takes the cake with the highest appreciation over the last five years. On the other hand, PepsiCo has provided the smallest returns to its investors, as shown in the chart below: 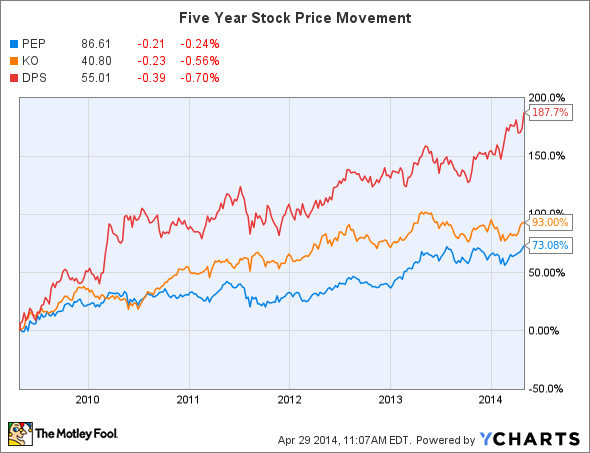 Dr Pepper's return of 188% is the highest when compared to Coca-Cola at 93% and PepsiCo at 73%, which makes it an attractive investment pick. However, if we look at quarterly revenue growth during the same time period, the situation is just the opposite: 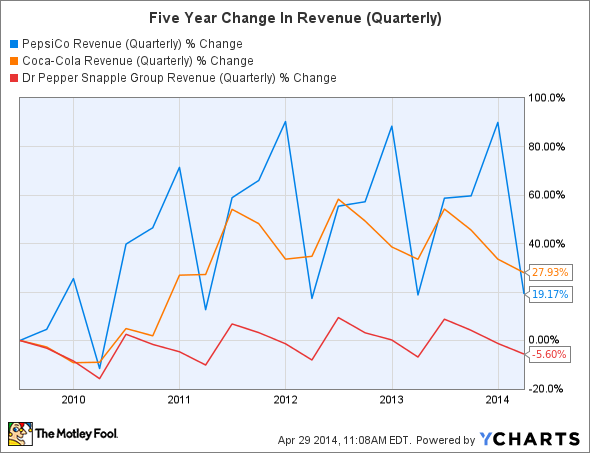 PepsiCo, which has provided the lowest returns to its investors, has witnessed growth of 19.2% in quarterly revenue during the same time period. On the other hand, Dr Pepper has registered the lowest revenue growth in the last five years. Therefore, PepsiCo suddenly becomes a much more impressive investment, wherein the effect of its revenue increase has yet to be realized. However, Coca Cola's highest growth of 27.9% makes it attractive too.

The strategic play
Beverage retailers are trying to overcome the problem of lower demand for carbonated soft drinks in the U.S. by introducing smaller portions of soda as well as health drinks and juices for health-conscious consumers. For instance, PepsiCo's Kick-Start, an energy drink, caters to health-conscious young people. It also enables the company to drive its revenue higher and widen its margins since such products are priced at a premium.

Furthermore, PepsiCo posted its first-quarter financials recently and beat analysts' estimates. Its top line stood at $12.6 billion, higher than the expectation of $12.4 billion. Also, it posted earnings of $0.83 per share versus an estimate of $0.75 per share. Strategies such as introducing new products, stepping up marketing, and raising product prices drove revenue north. Moreover, the food segment was one of the key growth drivers.

On the other hand, rival Coca-Cola's results missed the mark. Its top line shrank 4%, clocking in at $12.6 billion over last year as declining soda sales hampered overall revenue. Also, earnings plunged 7.7% to $0.36 per share over the prior year's quarter. Nonetheless, the company has taken initiatives to boost results. For instance, it has partnered with Keurig Green Mountain to introduce a soda maker that will help customers make Coca-Cola products at home.

Dr Pepper Snapple is a comparatively smaller player. Even Dr Pepper witnessed  declines with a 1% drop in revenue in its fourth quarter results. Results were affected by 3.5% lower volumes that were partially offset by price increases. Increase in product price led to a gross margin expansion of 100 basis points. Although the results were not so impressive, the beverage retailer is trying to boost its revenue by launching new products. Some of the new products intoduced during the quarter were Half 'n Half Lemonade Iced Tea and Hawaiian Punch, which requires less sugar but tastes the same as the regular drink. These items should help the company attract more customers.

Some more numbers
Coca-Cola's trailing P/E is the highest at 21.8, versus P/E multiples of 19.3 and 17.2 for PepsiCo and Dr Pepper Snapple, respectively. Although Coca-Cola's forward P/E multiple (18.2) is also higher as compared to PepsiCo (17.5) and Dr Pepper (14.6), the drop in forward P/E is the highest for Coca-Cola. Therefore, it is expected to grow much more as compared to its peers. Thus, investing in this company should be rewarding.

The takeaway
Although Dr Pepper looks like a better pick when the PEG ratio is considered, PepsiCo also looks good with the higher revenue growth in the last five years. Moreover, this revenue growth is not reflected in its stock price, making it an attractive investment opportunity. Also, its recent quarterly numbers and a wide portfolio of products add to its strengths. Further, Coca Cola looks good when P/E multiple is considered. Also, it has registered the highest growth in revenue. Hence, investing in any of these beverage providers should be rewarding.

Which Beverage Company Should You Be Betting On? @themotleyfool #stocks $KO $PEP $DPS Next Article
Current