Consumer spending in the U.S. surged in the month of March. It increased by 0.9% in March, much more than the 0.5% rise in February. This highlights that after people restricted their spending because of the harsh winter, they have now started to spend freely. Increased consumer spending brings good news for the retail segment. Retailers should now benefit from each extra penny spent by shoppers.

Some companies, such as J&J Snack Foods (NASDAQ:JJSF), have already started benefiting as demand for their products grows, resulting in higher sales. In fact, the snack food provider witnessed higher sales even in the midst of the severe weather conditions, as its second-quarter results show.

Snapshot of the quarter
J&J Snack Foods' revenue for the quarter increased by 2% over last year's quarter to $205.3 million. Soft pretzel sales and sales of frozen products such as frozen juice bars and Italian Ice drove this growth. The demand for soft pretzels has increased during the last few quarters and the company strengthened its position in this segment by acquiring New York Pretzel last October. However, even if we exclude the effect of the acquisition, the company's revenue from soft pretzels surged 10% over the year-ago period.

The company's earnings for the quarter surged to $0.72 per share from $0.67 per share in the prior year. Also, its gross margin expanded to 29.8% from 28.9% in last year's quarter. The company posted a higher bottom-line result mainly due to lower input costs.

Nonetheless, the snack maker announced that severe weather conditions affected its sales. The top line as well as the bottom line would have been higher if the winter had not been so cold. Furthermore, the company's sales have improved as the spring season has set in as sales for the first three weeks have jumped 8% over the year-ago period. Hence, J&J Snack Foods should grow in the upcoming months.

Comparison with peers
J&J Snack Foods' peers TreeHouse Foods (NYSE:THS) and Mondelez International (NASDAQ:MDLZ) have also been doing well, as their stock price appreciation shows. The stock price performance of these players over the last year is shown in the chart below: 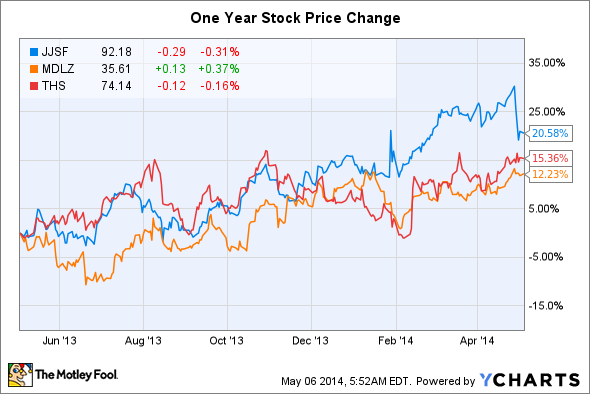 Although all three players have performed well and provided positive returns to their investors, J&J Snack Foods has been able to outpace its peers with a return of 20.6% over the last year.

On the other hand, Mondelez has provided the lowest return of the group at 12.2%. Nonetheless, its fourth-quarter results were good with a 3.9% surge in the top line and 13.5% jump in the bottom line. Revenue growth of 7% and 6% in the biscuits and chocolate categories, respectively, drove these results. These segments are doing well mainly in emerging markets such as India. However, declining gum sales and decreasing coffee prices were some of the weak spots which pulled total revenue down. Therefore, these factors might have deterred Mondelez International's growth.

TreeHouse Foods has provided a return of 15.4% in the last year. The company has followed an acquisition strategy similar to that of J&J Snack Foods. It acquired Associated Brands last October and has recently announced plans to acquire Protenergy Natural Foods, a private-label food maker. With the buyout of Associated Brands TreeHouse has strengthened its dry groceries and beverage segment, especially with the addition of specialty teas. Furthermore, Protenergy Natural Foods will enhance the company's natural food portfolio with soups and gravies. Moreover, the company expects the acquisition to add to its packaging and R&D capacity. Hence, this company should provide stiff competition to J&J Snack Foods as it has also expanded its portfolio of offerings.

The road ahead
J&J Snack Foods has been a remarkable performer and seems to have a bright future, which is shown by its growing sales during the last few weeks.

Moreover, soft pretzel has been a lucrative segment and has been registering growing sales. Additionally, the snack maker has strengthened this segment through an acquisition in order to cash in on the growing demand. The buyout of New York Pretzel has not only increased the acquirer's revenue, it has also expanded its pretzel offerings. The benefits of this addition should continue in the months to come.

J&J Snack Foods has made another acquisition, that of Philly Swirl, this month. Philly Swirl specializes in frozen novelties and will therefore strengthen J&J Snack's frozen-product segment. In fact, revenue from ices and frozen juices surged 17% to $11.9 million as sales at warehouse club stores increased. Hence, this segment is already witnessing growing demand and the addition of Philly should prove to be beneficial. Moreover, Philly Swirl's annual revenue of $25 million will add to the acquirer's existing top line.

Foolish final thoughts
J&J Snack Foods has been performing well and this is evident from its recent quarterly numbers. Also, it has been able to outperform other industry players. Moreover, it is focused on providing enhanced offerings to customers by either adding new businesses or innovating new products. The two acquisitions made by J&J Snack Foods during the last year should help the food company grow further. Hence, this snack maker looks good to go.