Regeneron (NASDAQ:REGN) reported its first-quarter earnings on May 8, topping analyst expectations on both the top and bottom lines. Regeneron's non-GAAP diluted earnings rose 27% year over year to $2.26 per share, or $263 million, topping the Thomson Reuters consensus estimate of $2.20 per share.

Regeneron's revenue rose 42% to $626 million, topping the consensus estimate of $609 million. However, U.S. sales of the eye treatment Eylea, the company's main source of revenue, rose 14% to $359 million, missing analyst estimates of $404 million. 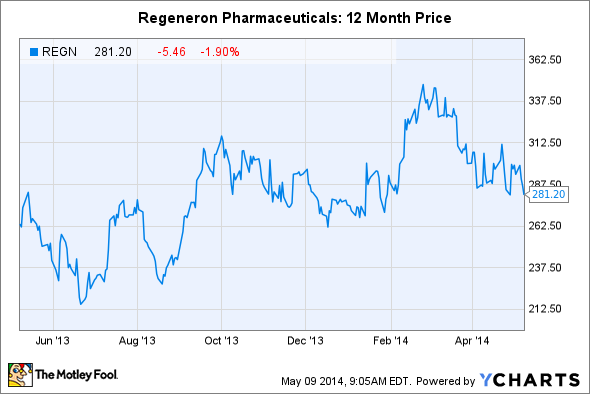 Regeneron attributed the slowdown in Eylea sales to a decrease in distributor inventory and a harsh winter in the U.S., which kept more patients at home. Regeneron's partner Bayer (OTC:BAYR.Y) markets Eylea outside the United States, where it reported sales of $218 million -- a 252% jump from the prior year quarter. Regeneron received $61 million from its share of Eylea profits outside the United States during the quarter. Regeneron finished the quarter with $1.18 billion in cash -- a 9% increase from the prior year quarter.

Overall, Regeneron delivered robust earnings and revenue growth, but the stock fell nearly 2% after earnings. However, let's take a look at why Regeneron is still a solid investment at current prices.

The slump in Eylea sales will only be temporary
Investors shouldn't be concerned about weaker-than-expected sales of Eylea. Regeneron reaffirmed its forecast for $1.7 billion in $1.8 billion in U.S. Eylea sales by the end of the year -- which would signify a healthy 21% to 28% increase from 2013 sales. Last year, Eylea generated $1.88 billion in sales worldwide. Analysts at UBS believe sales could go much higher, hitting peak sales of $3.7 billion by 2020.

However, Eylea needs to be approved for several additional indications before it can hit those peak estimates. Eylea lags behind its primary competitor, Novartis (NYSE:NVS) and Roche's (OTC:RHHBY) Lucentis, in terms of total approved indications:

Of these indications, the most important one is diabetic macular edema, or DME. DME affects approximately 8% of diabetics within the first five years of the disease, with 42% eventually developing the condition later in their lives. The FDA will reach a decision regarding the supplemental BLA (biologics license application) for Eylea's DME indication on August 18, which could be a positive catalyst for the stock.

Investors should also note that Roche's Avastin has been gaining acceptance as an off-label treatment for both Wet AMD, DME, and other eye conditions. The reason is the price -- Avastin can cost as little as $50 per injection, much less than Lucentis and Eylea, which both cost up to $2,000 per dose.

Alirocumab is a similar treatment to Amgen's AMG 145 (evolocumab) and Pfizer's RN-316. All three treatments target PCSK9, an enzyme which binds to the liver's LDL receptors and degrades their ability to lower LDL cholesterol levels. AMG-145 and RN-316 are currently in phase 3 trials as well.

Meanwhile, Sarilumab targets a very lucrative market -- rheumatoid arthritis treatments, such as Johnson & Johnson and Merck's Remicade, Amgen's Enbrel, and AbbVie's Humira are among the top-selling drugs in the world.

The Foolish takeaway
In conclusion, investors shouldn't fret about the temporary lull in Eylea sales. Eylea still has lots of room to grow, and an additional approval for DME could help keep the pressure on Lucentis. Long-term investors should focus on the development of Regeneron and Sanofi's three potential blockbusters -- which could grow into exciting new pillars of growth for both companies.