Skechers USA (NYSE:SKX) has moved on from its past high-profile errors like the "toning shoes" disaster, false advertising claims, lawsuit settlements, bad Super bowl ads, and erratic operating results. In short, it seems to have undergone a complete transformation and has been sprinting along impressively ever since. The stock is up 19% in 2014 and it could get even better.

Outperforming its peers and the market

Skechers' performance on the Street during the last year in comparison with those of Brown Shoe (NYSE:CAL) and Wolverine World Wide (NYSE:WWW) has been impressive, and it has outperformed the broader market as well. 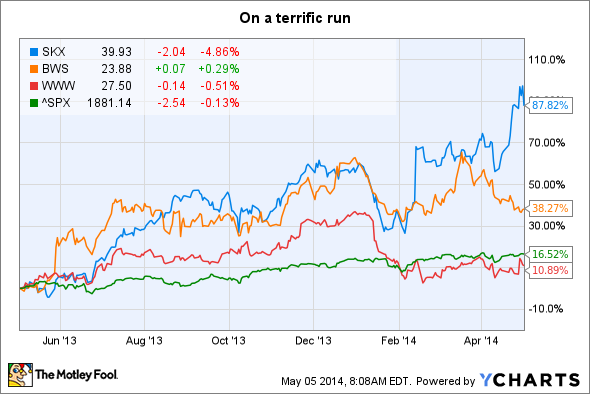 During the first quarter of fiscal 2014, demand for Skechers' footwear surpassed expectations, with double-digit increases at both its domestic and international wholesale businesses. In addition, the company-owned retail stores clocked 5.6% year-over-year growth in comparable-store sales, or comps, despite the headwind of unusually cold weather across the U.S. throughout the quarter and Easter falling in late April.

On the back of better-than-expected performance across all of Skechers' business segments, it clocked record first-quarter revenue of $546.5 million, which represented a 21% increase over its performance in the comparable quarter of the previous year. Driven by strong top-line growth, its earnings came in at $0.61 per share. The company finished the quarter with a strong balance sheet with $329.4 million in cash. It thrashed analysts' estimates on both the top and bottom lines.

Strategies that are driving growth
Skechers has been connecting well with consumers through its innovative products. For example, Skechers GOrun Ride 3 received the best buy award from Runner's World. In addition, Competitor Magazine awarded the best value award to Skechers GOrun 3. Moreover, Olympian marathoner Meb Keflezighi won the Boston marathon in the yet-to-be-released Skechers GOMeb Speed 3, a major accomplishment both for Keflezighi and the brand.

The company witnessed a rebound in Europe, clocking double-digit growth in almost every region where it distributes its products directly. To keep the momentum going, Skechers is expecting to complete the upgrade of its European distribution center by the end of 2014. This will bolster its capabilities and efficiency in the region and fuel further growth going forward.

Brown Shoe and Wolverine are experiencing weakness
Brown Shoe's business model is a mix of retail and wholesale like that of Skechers. However, Brown Shoe was quick to blame the weather for its comps decline of 1.8% year-over-year in the fourth quarter of fiscal 2013. It was the wholesale business that came to Brown Shoe's rescue somewhat with handsome 13.6% year-over-year growth, fueled by its healthy living and contemporary fashion platforms. However, this was not enough to offset the weakness in retail as its fourth-quarter consolidated sales declined to $600 million from $618.7 million in the year-ago quarter.

Going forward, Brown Shoe expects weakness in retail to continue in the first quarter of fiscal 2014 due to the impact of a harsh weather and delayed spring sales. It expects first-quarter sales to decline from the year-ago quarter.

However, Brown Shoe plans to invest heavily in the Sam Edelman brand, which will include the expansion of talent, marketing, e-commerce, and branded retail stores. It expects this to be a long-term growth driver. However, given the recent weakness in sales, investors should consider staying away from Brown Shoe.

Just like Brown Shoe, Wolverine's sales also dipped in its first quarter of fiscal 2014. However, the company expected this because of the weakness in its lifestyle group, which offset strengths in the performance and heritage segments. Wolverine blamed the weakness in retail in the U.S. in 2013 for its weak results. Its earnings also declined 7.4% year-over-year to $0.38 per share.

However, Wolverine reiterated its full-year revenue guidance in the range of $2.75 billion-$2.85 billion for revenue and earnings per share in the range of $1.57-$1.63, which represent year-over-year growth of 3%-6% and 10%-14%, respectively. This will be backed by the strength of its international business, product innovations, strong brand portfolio, and strong connection with consumers. This signals that Wolverine could be a good performer going forward despite weakness in the retail environment.

Takeaway
Skechers has done exceedingly well this year. The colder weather didn't affect the company's results, illustrating its resilience. Looking forward, Skechers' strategies should continue to drive its growth, which is why investors should definitely consider this stock for their portfolios.