Caterpillar (NYSE:CAT) is creating quite a stir after turning in a good first-quarter report. Argus is the latest firm to join the bandwagon of analysts who have turned bullish about the equipment maker's prospects. Last week, Argus confirmed its "buy" rating on Caterpillar stock and increased its price target to $120 a share. That points to nearly a 13% potential upside from the stock's current price of around $106.

Interestingly, the mining industry isn't out of the woods yet -- Joy Global's (NYSE:JOY) Q1 original equipment orders slumped 43% year over year, and Caterpillar expects its 2014 mining-equipment sales to fall 20%, twice as much as earlier projected. But analysts have suddenly chosen to overlook the mining slump and bet on Caterpillar's two other businesses instead. What's brewing?

What got analysts talking?
Argus and other analyst firms now want investors to focus on the continuing growth in Caterpillar's construction business and its energy and transportation (or E&T, formerly power systems) business. The company's first-quarter numbers were enough to excite analysts.

But can these two businesses ride high enough in the near term to propel Caterpillar shares to the $120 mark even as the mining industry struggles? It's worth digging deeper.

Excitement begins at home
Caterpillar attributed higher Q1 construction-equipment sales to a rise in dealer inventories. The company relies almost entirely on its dealership network for sales. After working down inventories worth nearly $3 billion each late last year, Caterpillar and its dealers entered 2014 with modest levels of inventory in hand. With end demand picking up ahead of the second-quarter selling season, dealers are back to stocking up.

Unlike last year, Caterpillar now plans to align its production with sales. That's a sensible move, one that will allow the company to benefit from the ongoing growth in the construction markets without locking in unnecessary cash into its working capital.

All eyes are on North America right now. While Caterpillar reported 36% higher construction-equipment sales from the market in its first quarter, Manitowoc's (NYSE:MTW) last-quarter crane orders jumped 29% year over year, driven by strong demand from the United States. Both Caterpillar and Manitowoc received encouraging response at the ConExpo held in March at Las Vegas, which paves the way for higher revenue in the near future. While Manitowoc launched 10 new products at the exhibition, Caterpillar introduced 14 new fuel-efficient machines.

Recent industry reports clearly indicate an uptrend in residential as well as non-residential construction markets in the United States. Here are the latest numbers:

Small wonder, then, that analysts are excited. After all, nearly 38% of Caterpillar's construction-equipment sales came from North America last year.

Meanwhile, the world's largest construction-equipment market, China, is also on its way to recovery. After gaining leadership position in excavators, Caterpillar is now eyeing the wheel loader segment in China. Caterpillar's sales from the market surged 30% and 20% during its first and fourth quarters, respectively. That's excellent news for the company that has chosen China as its priority growth market.

Where the real opportunity lies
I'm even more excited about Caterpillar's E&T business. E&T has been the company's most resilient and stable business in recent years, as evidenced by the following figures.

All figures in billions of dollars. Source: Company financials.

Here are two factors worth noting:

If that isn't inspiring enough, here's another statistic investors perhaps aren't aware of: Caterpillar's backlog value (a key indicator of future revenue) increased 7% sequentially to $19.3 billion in its first quarter, and all of that increase was in its E&T business. Yes, E&T looks poised for another solid year, thanks to its diversity.

Caterpillar's reciprocating engines and turbines serve industries ranging from oil and gas to power generation to transportation (marine and rail) and industrials. That should give you a fair idea about how far the E&T business can go. While it's beyond the scope of this article to enumerate the opportunities within individual industries, I'll leave you with one graph that Caterpillar has repeatedly highlighted in its recent presentations. 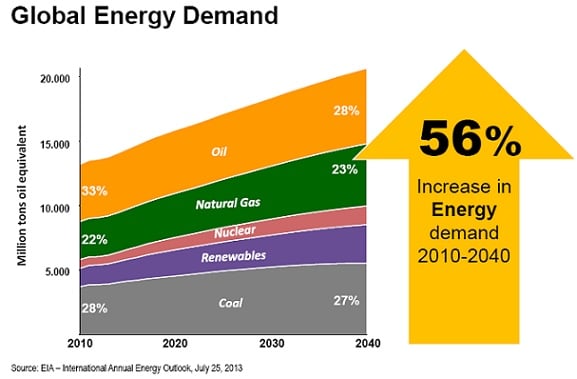 The U.S. Energy Information Administration projects global energy consumption to jump 56% between 2010 and 2040, with fossil fuels -- oil, natural gas, and coal -- meeting 80% of that demand. With its natural gas and dual-fuel engines (diesel/natural gas), Caterpillar is well poised to exploit those opportunities.

So do Caterpillar shares deserve a $120 valuation?
Given the growth opportunities in Caterpillar's construction equipment and E&T businesses, you'd think its shares should easily climb to $120. I beg to differ.

If these two businesses were enough to put Caterpillar on the fast track, it wouldn't be expecting to end 2014 with flattish top and bottom lines. Like it or not, Caterpillar has a lot at stake in the mining industry, and it can't really grow until its highest-margin business recovers. There's a lot more to the story, as I'll tell you soon in an upcoming post. Stay tuned.