According to The Wall Street Journal, the price of Canadian heavy crude has surged by more than 60% since November. This has resulted in surging share prices for several oil sands producers, including Athabasca giant Suncor Energy (NYSE:SU). In the case of Suncor, however, the surge in Canadian oil prices may not have as large of an impact on its overall profitability as the market seems to think.

As might be expected, the semi-solid state of this oil and the high volume of impurities make it much more difficult and expensive to both extract from the ground and refine into a form that is truly usable for our needs. Because of this, Canadian heavy oil tends to trade at a lower price point than lighter grades of crude.

Where Suncor comes in
Suncor Energy is by far the largest operator in the Canadian oil sands, so many investors would expect to see the company's profits surge due to the rising price of Canadian heavy crude. However, they would be overlooking one critical fact: Suncor Energy has a very large refining operation that allows it to hedge weak inland prices versus Brent prices. 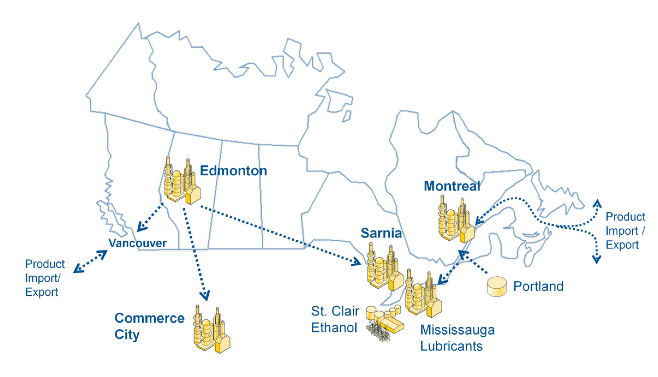 These four refineries are not all processing Canadian heavy crude. The facility in Edmonton, for example, only processes oil that is extracted from the oil sands, while only 15% of the oil processed by the Commerce City refinery comes from the oil sands. However, its refining capacity is large enough to process the majority of its own oil sands production. The refineries sell the finished products such as gasoline at prices that are linked to Brent crude, however, and not to Canadian heavy crude.

In effect, when the price of Canadian heavy crude is substantially lower than Brent as it had been until recently, the company's refineries buy the oil from the oil sands operators for relatively low prices and then sell the refined products at high margins. When the spread between Canadian heavy crude prices and Brent crude prices narrows, though, the refiners face lower margins.

Shares surging on strong results and likely heavy crude prices
Shares of Suncor Energy have been surging dramatically over the last few weeks. 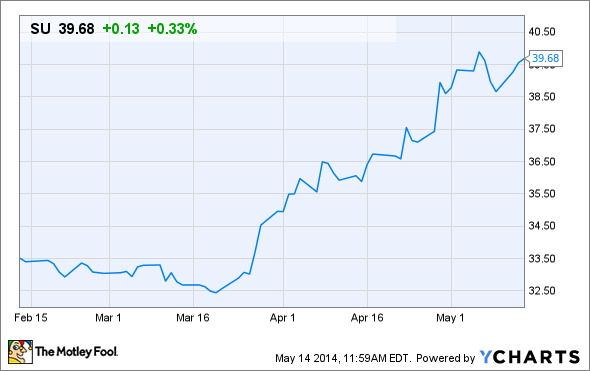 At least some of this surge upward can be attributed to the company's stellar first quarter earnings report. The company announced its first quarter results on April 28, though, and the upward climb began about a month before that. Therefore, it does appear that the rising price of Alberta heavy crude has played a role in that price appreciation, which it clearly should not have.