Tennessee-based, giant courier FedEx (NYSE:FDX), trusted the world over for its efficient Express deliveries, has been struggling with profitability issues. While the performance of its core Express business failed to impress investors, FedEx Ground posted respectable figures in the latest fiscal third quarter.

Why has the Ground division become the most important driver of growth for the company in recent years? Will its success be big enough to compensate for the slack in the Express segment? As the Ground segment soars high, what's on offer for investors? Let's find out.

Back in the '70s, FedEx pioneered Express deliveries by taking the aerial route. That decision has reaped rich dividends for the company over the years, but nothing is permanent in this world. With rising economic uncertainties, more people are opting for cheaper services; this is eating into Express' revenue and margins. In the first three quarters, revenue remained stagnant and earnings moved only on account of FedEx's cost-cutting measures.

While cutting costs can provide near-term relief, FedEx needs a growth avenue to secure its future -- and the Ground segment fits the bill. The segment delivers small packages to business and residential customers. The division also includes SmartPost, which delivers small packages in bulk and utilizes the United States Postal Service for final delivery.

The Ground business is showing tremendous potential with the increase in demand for e-commerce. It generated more than $10 billion in revenue last year, accounting for nearly a quarter of the company's total sales. Most of the courier giant's incremental sales have come from this segment in the recent past. In fact, the third quarter marked the 57th consecutive quarter of revenue gains.

FedEx has forecast that global e-commerce sales could increase to $1 trillion by 2016, accounting for 1% of the world's GDP. This means that the trend should continue.

Much-needed profitability boost
FedEx has maintained high operating margins in the Ground segment. In the last three fiscal years, margins have consistently remained higher than 15%, which has helped a lot to offset the weak margins in Express, which dipped to just 2% in fiscal 2013.

While the size of the Express business is about two and a half times the Ground business in terms of revenue, the latter has generated double the profits of the former in the first three quarters. In fiscal 2013, return on invested capital in the Ground segment was a mind-boggling 18%. Management has said that FedEx Ground's profit margins are the best in the industry.This shows that the growing proportion of Ground segment sales is improving the company's overall profitability.

FedEx Ground -- fast and furious
Because it's more oriented toward air-delivery, FedEx has lagged behind its bigger peer United Parcel Service (NYSE:UPS), a market leader in ground logistics. As ground delivery picked up speed in the U.S., UPS gained big time with its highly efficient ground services. Delivering 12.1 million packages through its ground unit in 2013, UPS handled twice the volume  that FedEx Ground moved. But FedEx could prove to be stronger competition with time.

Sensing the enormous potential of the Ground business, FedEx is investing heavily in building capabilities. The company has already made capital expenditures of $609 million in the Ground segment in the first three quarters alone, which exceeds the $555 million spent in the entire fiscal past year.

Investments have gone into launching and expanding overnight ground services in several new metropolitan markets in order to increase coverage. The company has introduced new hubs with the latest automated sorting technology, expanded the existing ones, and improved other services as well which have increased daily pickup capacity.

FedEx has made significant progress in fast tracking its deliveries, slashing transit times in 4.4% of its lanes. This has given it a good competitive edge. Out of every 100 transit lanes, FedEx and UPS take similar delivery times in 67 lanes, FedEx is faster in 30, while UPS is speedier in three. FedEx has net advantage in 27% of the lanes. These efforts have paid off and the company has increased its market share significantly. 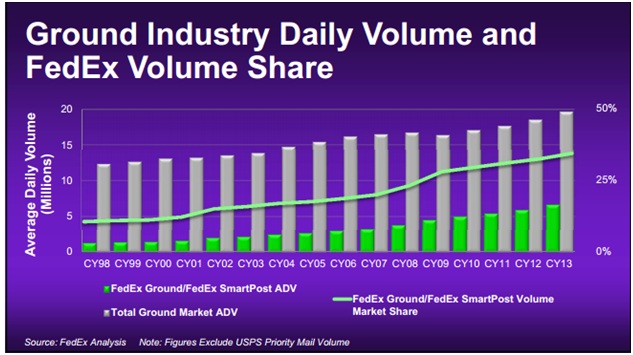 The good thing about the Ground segment is that all its services -- FedEx Ground, FedEx SmartPost, and FedEx Home Delivery -- are in demand. The third quarter benefited from market share gains in the home delivery business, which in turn led to an 8% increase in average daily package volume. Yield, which is revenue per package, also increased on account of the January rate hike of 4.9%. Consolidated segment sales improved 10% over last year to cross $3 billion.

Parting thoughts
FedEx is doing the right thing by growing its Ground business. While it's true that the operations may not reach UPS' scale in the near future, FedEx has already gained some competitive edge and the continued market share gains signal a big positive for the segment. The Ground segment's higher profitability comes at a time when the company needs it the most. FedEx can leverage these advantages to keep its growth trajectory intact, while dealing with the pressures in the Express segment.