Please ensure Javascript is enabled for purposes of website accessibility
Log In Help Join The Motley Fool
Free Article
Join Nearly 1 Million Premium Members And Get More In-Depth Stock Guidance and Research
By Leo Sun – May 16, 2014 at 10:19AM

Could Pinterest, the third most popular social network in the U.S. after Facebook (META 3.01%) and Twitter (TWTR), file for an IPO soon? Recent growth numbers, funding, and monetization strategies certainly suggest that it could be the logical next step for the scrapbook-like site. 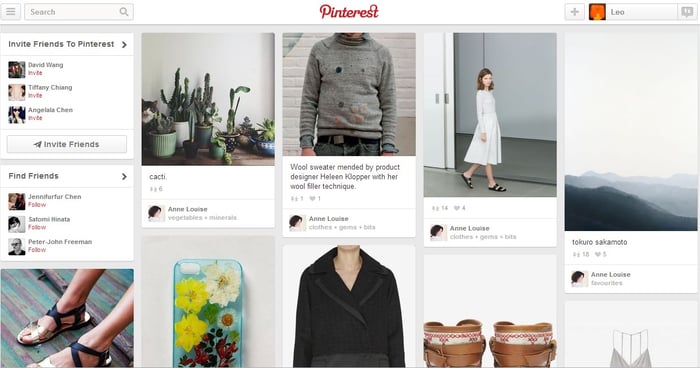 Launched in March 2010, Pinterest has 70 million registered users -- a sharp increase from 10 million users in early 2012. At the end of 2013, Pinterest had 35 million monthly active users (MAUs), compared to Twitter's 57 million monthly MAUs in North America. Pinterest recently raised another $200 million in funding, giving it a market value of $5 billion. The company has raised $764 million in venture capital to date.

$5 billion seems tiny compared to Facebook and Twitter's respective market caps of $149 billion and $19 billion, but that's exactly what makes Pinterest such an attractive IPO candidate -- it could go public much earlier in its growth cycle than either company.

Pinterest is currently the most popular social network among women, who account for 80% of its user base. Twitter, according to its latest earnings report, has a slightly larger presence among men than women. Take a look at this comparison between the online shopping habits of men and women to see why that matters to advertisers:

Considering that women spend more time shopping online, are more likely than men to recommend products over social networks, and account for the vast majority of Pinterest users, it's easy to see why Pinterest could be a dream platform for advertisers.

Pinterest also has an impressive mobile presence, with 75% of its traffic originating from mobile devices. By comparison, 78% of Twitter's MAUs came from mobile platforms, as did 79% of Facebook's MAUs. 48% of Pinterest users have shared content on Apple's (AAPL 1.37%) iPad, compared to 17% of Facebook users and 16% of Twitter users, according to BI Intelligence.

Mobile engagement and the use of iPads matters a lot to e-commerce for one simple reason -- Apple users tend to spend more online than Google Android users. A study last July from Forrester research revealed that iOS users were 30% more likely to purchase a product online than Android users. During Black Friday last year, 82% of all mobile purchases in the U.S. were made from iOS devices.

Last July, Pew Internet & American Life Project released a survey of iPhone and Android users that revealed that the iPhone was more popular among women than Android phones. This means that combining Pinterest and iOS devices sounds like a winning combination to many advertisers.

That's why it followed Twitter's lead and launched Promoted Pins earlier this month. Major companies in retail (Gap, Lululemon Athletica), food (Kraft, General Mills), and travel (Expedia, Disney resorts) immediately lined up to participate. Although it's unclear how much revenue Pinterest can generate from these ads, the company has kept the promise it made in January to generate revenue this year.

Pinterest is a more natural way to introduce ads to the user than its peers. Twitter and Facebook got the ball rolling first by promoting the idea of "companies as friends." That was the first big step -- following and "liking" business pages felt like a more natural way of interacting with a company than clicking on banner ads.

The problem, however, is that most people aren't browsing Twitter or Facebook to shop. Pinterest's key difference is that it encourages people to pin products they like, want, or have onto pinboards to share with others. When users see products they like, they repin it again to their followers. When a Twitter or Facebook user comes across an ad in their Timelines and News Feeds for new shoes, it sticks out like a sore thumb. In Pinterest, it feels natural to repin it to your own board.

A study compiled by Quick Sprout in January claimed that clicks on Pinterest generate four times as much revenue as Twitter and 27% more than Facebook clicks -- a calculation based on sales reported from Pinterest's 500,000 business accounts. The study also states that users referred from Pinterest are 10% more likely to purchase a product than from other social networks.

Can Pinterest keep growing?
Pinterest has certainly proven its appeal as an advertising platform, but it needs to prove that it has staying power to keep up with Twitter and Facebook before it can go public.

First and foremost, Pinterest is highly vulnerable to copycats. eBay (EBAY -0.33%), for example, replaced its main page with a clone of a Pinterest pinboard last October. Other sites like Trippy, Wanderfly, Gtrot, Manterstring, and Gentlemint also followed suit with Pinterest clones. Many of these clones focus on specific interests, which could lure away Pinterest users with their familiar design mechanics.

The second problem for Pinterest is user growth. Considering that 80% of its users are women, and a fifth of all Internet-using women in the U.S. already have a Pinterest account, it doesn't seem possible for Pinterest to suddenly double or triple its user base.

Last but not least, monetizing Pinterest is a risky bet. Although users might accept a few Promoted Pins on their boards, too many Promoted Pins will easily turn the site into a river of junk ads.

The bottom line
I wouldn't be surprised to if Pinterest goes public, even though CEO Ben Silbermann told the Wall Street Journal back in January that it was still "pretty early" to be thinking about an IPO.

Pinterest clearly has remarkable strengths -- its popularity among women, its strong presence in mobile, and the natural way it promotes engagement of advertisements. However, there's a clear risk of the company devolving into a mess of ads, since it has always been more of a list of "likes, wants, and haves" instead of a full-featured social network.