Kandi Technologies (NASDAQ:KNDI) is a recreational vehicle company that began to make EVs in 2008. It has recently implemented a car-share program in traffic laden, air polluted China. Its growth potential is huge, but its dealings are murky. Getting a taste of Kandi broke my sweet tooth and reminded me just how refreshing Tesla Motors (NASDAQ:TSLA) is to have in my portfolio.

Back in 2008 Kandi introduced its first electric car, the Coco. Prior to that, it focused primarily on atvs, go-carts, and recreational vehicles. Last year, Kandi's EV segment increased substantially due, in large part, to the company's growing car-share programs.

From traffic congestion to air pollution, China is struggling to handle how to address its growth. One solution, as Kandi sees it, is to offer cheap public transportation that gets residents from point A to point B as quickly as possible. Kandi sees its rent-by-the-hour, car-share program as an emission-free answer to China's growth problems.

Kandi is aiming to provide what Tesla does for small businesses, but to the average Chinese customer. But filling that niche doesn't provide enough growth potential to overcome Kandi's glaring risks.

The sweeter
In March of last year, Kandi entered into a joint venture with Geely, one of the largest vehicle manufacturers in China. Due in part to this partnership, Kandi's EV product segment revenue increased by about 145%, its EV unit sales increased by about 20% and its average EV unit price went up by about 104%. EV sales made up about half of Kandi's revenue in 2013, mostly due to it adding two new EV models the SMA7000BEV and the SMA7001BEV (catchy names, huh?). More on Kandi's accounting below. 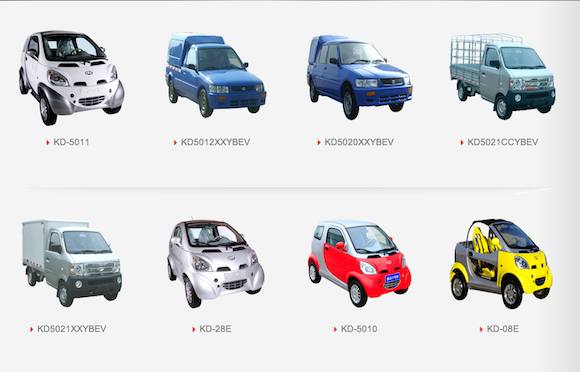 The small recreational vehicle company may be able to ride the Tesla wave, what with the boutique brand making such a splash in China recently, but that wave may not last too long. Since, unlike Tesla, Kandi doesn't seem to have transparency and accountability on its mind. Therein lies the problem, Kandi's downside is too apparent to ignore, and presents too much risk for long game investors.

The sour
Sure, Kandi's growth potential is huge, thanks to its car-share programs and its partnership with Geely, but its risks are ever present and too troubling for many buy and hold investors to buy into.

To start, Sharesleuth.com has alleged that Kandi manipulated its sales numbers in order to misrepresent its revenue. Remember those stellar numbers earlier in the article?

Well, according to Sharesluth, from 2009 until 2011 Kandi reported through SEC filings that it sold more than 3,700 of its Coco EVs in the U.S., the company's main market from 2008 until 2011 , when, in fact, as Sharesleuth alleges, Kandi actually sold less than 1,000 vehicles during that time. The numbers it may have fudged amounted to about 20% of the company's revenue for both 2009 and 2010.

If the company manipulated this data then, what's to stop it from using the same shady accounting tactics now?

It gets worse: Kandi has been shady since the beginning.

The cavity
Kandi went public through what's called a reverse merger. While working with the Kelley Group, made up of Toronto-based consultant S. Paul Kelley and his three associates, Kandi acquired a majority stake in Stone Mountain Resources, a public Nevada mining company. Once Kandi got its sticky fingers into Stone Mountain, it essentially gutted it and started doing its own business under Stone Mountain's public status. This allowed Kandi to be traded in the U.S. while sidestepping the grueling process (and all the regulation therein) of going through the IPO process.

The reverse merger also positioned the Kelley Group to profit, as it owned shares in Kandi, served as liaison for the company to be listed on the U.S. exchange, and then promoted and inflated the stock.

The SEC Kandi krush
Earlier this month the SEC charged the Kelley Group with conducting these reverse merger schemes in order to manipulate trading and gain millions in profit.

The SEC alleges that during Kelly's involvement with Kandi, two of the Kelley Group consultants, George Tazbaz and Roger D. Lockhart, reached verbal agreement with Kandi's CEO, in which the parties agreed upon the following: Kandi would give Tazbaz and Lockhart 350,000 additional shares of the company. The consultants would then pay U.S. stock promoters to tout Kandi, and would orchestrate said promoters to manipulate and increase the stock price to $3 a share, minimum, within three months.

This manipulation was just the tip of the iceberg; the Kelley Group was giving Kandi stock away to a number of stock promoters. It then used various fraudulent schemes in order to increase share prices.

Once they inflated the market to their liking they dumped their shares and sought a nice profit.

And it appears Kandi's CEO knew about it all along.

In times like these
While I am very long on Tesla, I recognize that it fills a boutique luxury niche, and that its product line isn't one that many Chinese folks can afford. I was poking around and hoping to find a company on the other end of the spectrum, one that could provide cheap EVs to the Chinese market, which is looking to add 500,000 EVs and plug-ins to its roads by 2015. Kandi seemed, at face value, to fit the bill.

Boy, was I wrong. Kandi's risks are seemingly endless and for many long game investors it isn't worth it, no matter the growth potential.