Qualcomm (NASDAQ:QCOM) is one of the world's top semiconductor companies by revenue, and certainly one of the most inspiring semiconductor success stories in recent years. The company, under former CEO Paul Jacobs and now under current CEO Steve Mollenkopf, has been relentless in driving next-generation mobile silicon with a breadth and depth that's unmatched among its peers in the ARM Holdings (NASDAQ:ARMH) ecosystem. Today, along with a preview of its upcoming Snapdragon 805, Qualcomm updated the world on what's coming down its chip pipeline. 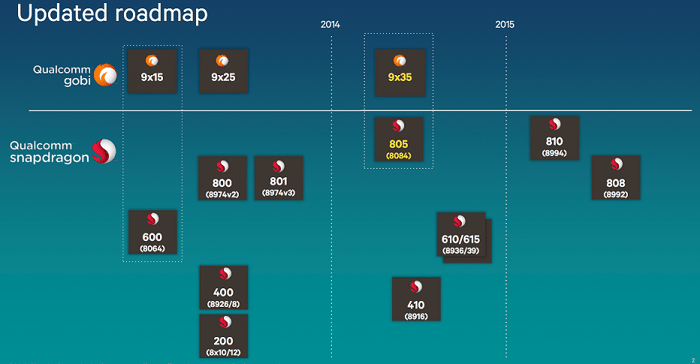 Qualcomm's Snapdragon 805 is set to show up in devices during the second half of this year. Interestingly enough, the Snapdragon 810 -- which is the more powerful of the first 20-nanometer system-on-a-chip products coming from Qualcomm next year -- is set to come first. Following that will be the Snapdragon 808. which is the less powerful two-core ARM Cortex A57/4 core Cortex A53 big.LITTLE variant (810 features 4 A57 cores and 4 A53 cores as well as a faster graphics processing unit and LPDDR4 support).

The mid-range quad/octa-core Cortex A53 parts look on track to start shipping to customers later this year (Digitimes suggests that the parts are about to enter high-volume production), and the Snapdragon 410 for really low-cost phones (again based on the Cortex A53) looks to arrive a bit sooner than that.

An attractive roadmap
In all, this is an extremely compelling product stack that establishes leadership for Qualcomm from the lowest-cost entry-level LTE phones to the highest-end hero devices. The 410, 610, and 615 should offer best-in-class performance/power (as well as tick the 64-bit checkbox and -- in the case of the 615 -- tick the "octa-core" checkbox for regions where core count is important) and a solid cost structure. The high-end 808 and 810 look so far to be unmatched in terms of performance and integration relative to what has been announced so far (although it is admittedly early days).

The most interesting point here, though, is that the Snapdragon 810 will come first. This, at first glance, looks as though it is more targeted toward tablets rather than phones, but the timing really does suggest that it's going to be ready for the launches of next-generation "hero" phones like the Samsung Galaxy S6 and the successors to the LG G3, and HTC One (M8), and the other devices that launched this year.

While it's still too early to say with complete certainty that this product lineup will sweep the important designs during the first half of 2015, the odds are very good that it will. Qualcomm's leadership in modem technology, as well as on the computing and graphics performance side of things, really does make it the lineup of products to beat.

Foolish bottom line
Qualcomm's mobile R&D dollars are being put to good use, and it's clear that this is not a company resting on its already considerable laurels. Any merchant vendor (or even in-house team) trying to build a mobile processor is going to have to compete on performance, power, and cost relative to Qualcomm, and there are very few players with the sheer R&D might and economies of scale to compete well.

This won't stop many from trying, and a second source to Qualcomm is likely to emerge, but Qualcomm will most likely remain the leader, given its head start and wherewithal to invest at a level that few companies could afford to and even fewer would want to try.