When it comes to investing for the long term, one of your best bets is to consider stocks that pay a regular dividend. By that same token, dividend stocks tend to command a premium price since investors specifically seek them out.

Meridian Bioscience (NASDAQ:VIVO) is a poorly known health-care stock that offers a roughly 4% dividend, zero debt, and high single-digit growth in diluted earnings per share. Moreover, the stock is trading close to its 52-week low after falling 20% year to date due to a weaker than expected first-quarter earnings report and 2014 annual guidance. With this in mind, let's see if this small-cap biotech should be on your watchlist. 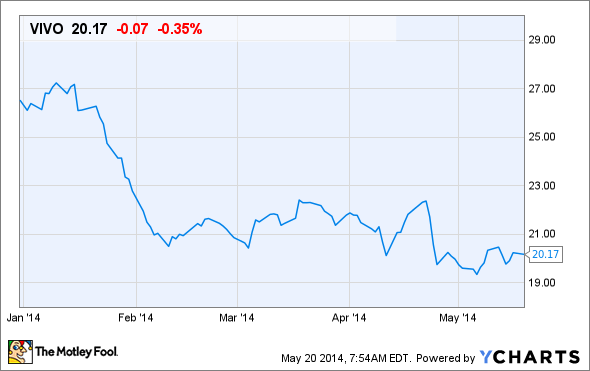 On the diagnostic side, Meridian's biggest revenue drivers are its family of tests for Clostridium difficile and Helicobacter pylori, which delivered 59% of this segment's revenue in the second quarter of 2014.

Problematically, however, Meridian is seeing a steady decline in its revenue from sales of C. difficile tests because of increasing competition in the field. Specifically, the company reported that sales fell 6% in the second quarter compared to a year ago, reflecting the influence of rivals such as industry heavyweights Qiagen (NYSE:QGEN) and Thermo Fisher Scientific.

Looking ahead, Meridian's tests will face even more competition following the recent approval of Qiagen's artus C. difficile QS-RGQ MDx Kit by the Food and Drug Administration. On the bright side, Meridian's H. pylori tests saw an 11% increase in year-over-year sales, helping to offset some of the loss from C. difficile sales.

Meanwhile, the company saw a healthy 20% increase in revenue from its life science segment compared to the same period a year ago. This increase was driven partially by the launch of new molecular tests SensiFAST and MyTaq PCR.

Meridian was forced last month to lower its 2014 guidance, primarily because of falling sales for its C. difficile tests. The company now expects to post net sales for the year of $190 million to $195 million, compared to its prior projection of $203 million to $208 million. In terms of growth, expect Meridian's adjusted EPS to increase by roughly 8% compared to a year ago.

Foolish wrap-up
Following the Meridian sell-off that started at the beginning of the year, the stock would appear to be a strong buy. After all, there aren't many stocks offering a 4% yield and high single-digit growth when it comes to earnings per share. Keeping with this idea, Meridian has a fairly strong balance sheet with zero debt and assets of $113.9 million. As mentioned above, the company's life science segment is also growing at a healthy clip, giving investors reasons to be optimistic that the annual guidance won't be revised lower yet again.

That being said, Meridian's gross profit has decreased this year because of the Medical Device Tax implemented in January 2013. While this is an issue across the industry, Meridian was trading at a price-to-earnings ratio of close to 40, prior to the pullback. With falling margins and decreasing revenue, we are looking at a forward price-to-earnings ratio that still tops 20. In other words, Meridian isn't exactly cheap at current levels.

All told, there are some good reasons to keep an eye on Meridian, but perhaps even better reasons to stay on the sidelines for the time being. Put simply, you may want to wait until Meridian's forward price-to-earnings ratio drops into the teens.