The portable/handheld device segment is receiving a lot of media coverage and investments. While investors are vigilant not to miss any opportunity in the handheld segment, other enabling industries are continuously overlooked. One such opportunity is QLogic (NASDAQ:QLGC), whose fiber channel and ethernet adapter business is directly connected to the growth of data and connected devices.

The company's acquisition of ethernet-related assets from Broadcom (NASDAQ: BRCM), and leadership in the high-growth fiber channel market, present a strong case for growth. The company's primary clients include IBM, Dell, and Hewlett-Packard, which accounted for nearly 56% of total revenue in fiscal 2013. HP was the largest customer, with a 24% contribution to the revenue share.

The stock grew by around 16% in 2013, as the company consistently beat analyst estimates during the year. However, a decline of 14% in 2014 almost neutralized last year's gain. Future earnings estimates are not projecting substantial growth and, hence, the stock is not expected to grow within the next year or so. But, market indicators should not be viewed in isolation, and factors like industry prospects and competitive positioning will also affect the performance of the stock going forward. 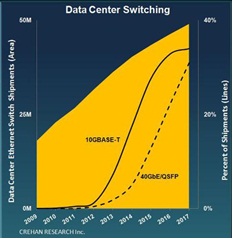 Crehan Research predicts that the data center switch market will reach $16 billion by 2017. According to the report, ethernet and fiber channel over ethernet, or FCoE, will become an ever-increasing portion of the market. IDC predicts continued growth for fiber channel port and revenue over the next four years. 16G FC is expected to grow at a CAGR of 52% (2011-2016). Crehan projects a 40% CAGR for Gen 5 16G fiber channel until 2016. To summarize, the need for data will drive the growth of infrastructure products, and fiber channel is expected to be the fastest-growing segment.

Competitive positioning of QLogic
QLogic has been lagging behind Emulex in the converged data center network adapter market, but making headway in the fiber channel adapter market. It held approximately 55% FC market share in Q3 2013, compared to 40% by Emulex. Moreover, the company's 16Gb FC market share grew by 12%, compared to a 5.9% decline in Emulex's share. In calendar year 2013, QLogic held approximately 54% of the fiber channel market, 12% more than the nearest competitor. The point is that QLogic is gaining ground, most likely because of product superiority, in the fast-growing FC market. This is a notable competitive strength of the company and will help future growth.

Recently, QLogic acquired certain ethernet control-related assets from Broadcom. As a result, it is on its way to becoming the second-largest player of the ethernet adapter market later on this year, and the market opportunity will rise to $1.2 billion in 2016, according to management. Hence, these assets will contribute toward the revenue and earnings of the company from the first quarter of fiscal 2015. Moreover, QLogic purchased Brocade's adapter business, and both companies agreed to collaborate on fiber channel technology enhancements. This development will also contribute to QLogic's bottom line and strengthen its product portfolio, which is expected to grow by 10%-12% during fiscal 2015. 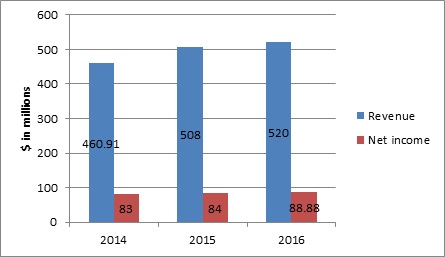 The graph reveals a growing trend for both revenue and EPS going forward. A growing market share in FC, consolidation brought about by the Broadcom and Brocade asset acquisitions, and overall industry growth will be the primary reasons for this trend. The forward P/E of the company is approximately 10.5, below the industry average P/E of 16, provided by Reuters. This means that the stock is trading relatively cheaply and has some upside potential.

Bottom line
The rise of portable devices and need for data has affected the infrastructure equipment industry, just as it has affected almost all technology sector industries. Infrastructure adapters and switches are expected to grow at a decent rate in the coming years. Fiber channel will be among the top growth segments of the industry, benefiting QLogic due to the company's FC technology dominance. The company will also grow in the ethernet space, thanks to its Broadcom asset acquisition, which should add to its bottom line. Based on these facts and figures, QLogic is a good investment.