At Intel's (NASDAQ:INTC) annual stockholders' meeting, CEO Brian Krzanich gave an update on Intel's business. One interesting tidbit from that update is that Intel is planning on launching its next-generation Cherry Trail 14-nanometer product for tablets during the first half of 2015, a slight delay from the prior expectations that the platform would be shipping at the end of 2014.

Cherry Trail gets yet another delay
According to this slide from VR-Zone, Intel's Cherry Trail was originally expected to land in September 2014, which would have meant a launch at the company's annual developer forum in San Francisco. 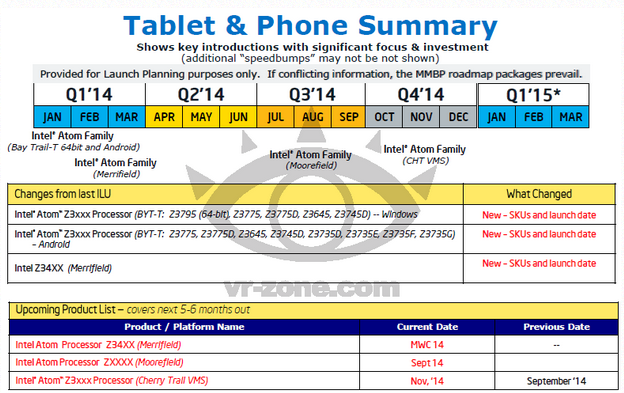 As you can see, the first Cherry Trail product was intended for launch in September 2014, but thanks to the 14-nanometer manufacturing delay, it was moved to November 2014. Then, in Intel's Mobile World Congress presentation, Hermann Eul -- the GM of the Mobile & Communications Group -- claimed that Cherry Trail would launch at the end of 2014.

Now, it looks as though Intel is merely committing to a "first half of 2015" launch/ramp for the Cherry Trail product. While this isn't entirely unexpected, particularly as Intel's Silvermont-based products (Merrifield, Moorefield, and Bay Trail) haven't really had a lot of time to ramp, it is a disappointment nonetheless.

Intel isn't the only one experiencing delays
While there are companies that try to give the impression that moving to more advanced products and to more sophisticated manufacturing technologies is getting "easier" over time, the truth is that this stuff is hard. Designing and validating next-generation designs on increasingly complex manufacturing technologies is no cakewalk.

Semiconductors are a tough business, and while the marketing departments from every company wants to claim that the future is "easier," it's really not and you should almost always expect delays.

What does this mean for Broxton?
The big question now is what happens with Broxton. Intel has always set expectations that this is a mid-2015 product and that it would be the one to really fundamentally change Intel's competitive positioning. Cherry Trail is a tablet-only product, so if Intel wants to be able to compete with Qualcomm's Snapdragon 808/810 for smartphones launching in the back-half of 2015, it can't really afford to delay Broxton any further.

Intel is likely to give a more detailed update about its mobile product road maps at the Computex trade show in Taipei, Taiwan, next month and for Intel investors, this will be something well worth paying attention to.

Foolish bottom line
At the end of the day, Intel really needs to be accelerating its mobile road map if it ever plans to be the leader in this space that it is investing to be. Yes, designing ever more complex chips is extremely difficult, and, yes, moving to next-generation process technology is difficult, but Intel is spending a lot of money in this space and, despite the extreme difficulty of catching up, Intel needs to do it to stay relevant in the long run.