It may not look like much, but this might be the biggest oil field in the world (Source: Devon Energy Media Resources).

The pride and joy of Saudi Arabia's oil industry has been the Ghawar oil field, which has been recognized as the largest in the world ever since its discovery in 1948. That is, perhaps, until now. A shale oil formation deep beneath the plains of West Texas has been sitting right under our noses for years, and Pioneer Natural Resources (NYSE:PXD) estimates that it could usurp the Ghawar field's 60-year reign. Let's look at what Pioneer has discovered, and what this find could mean for producers with heavy investments in the Permian, including Pioneer, Occidental Petroleum (NYSE:OXY), EOG Resources (NYSE:EOG), and Devon Energy (NYSE:DVN).

Hiding in plain view
By the time the Ghawar field was discovered, commercial oil production had been taking place in the Permian Basin in Texas for more than 25 years. Estimates of the Permian's reserves were somewhere in the 10 billion-12 billion barrel range. That's nothing to scoff at, but it certainly didn't come close to the 71 billion barrels in that single formation under the Saudi desert. Apparently, those oilmen simply didn't look hard enough, because they missed the rest of the oil in the Permian.

All 75 billion barrels of it. 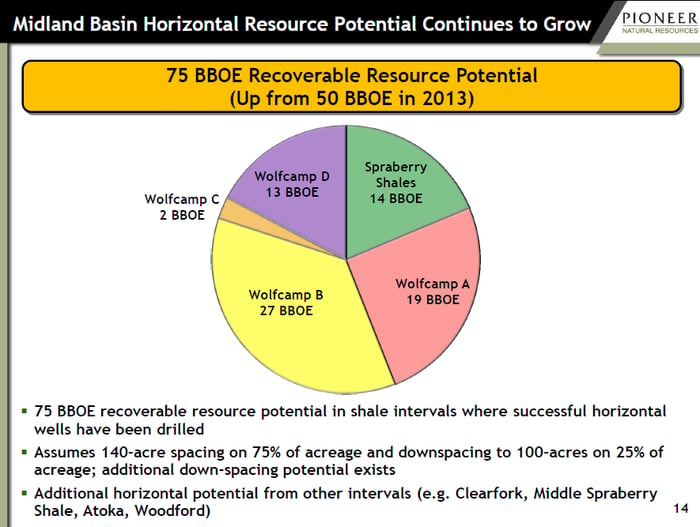 To be fair to those wildcatters of old, they didn't know that oil trapped in shale would someday be commercially extractable. Now that hydraulic fracturing has made it possible, we are discovering increasing amounts of oil in the Permian. Pioneer Natural Resources -- one of the most prominent landholders in West Texas -- estimates that the recoverable resources in the field's different shale layers could make it the world's largest single source of recoverable oil ever found.

This isn't just a lot of oil. This is a "completely change the dynamics of global production" amount of oil. This is an "enough to supply all of America by itself for more than a decade" amount of oil. If Pioneer's estimates are accurate, and this resource can be de-risked to be considered proved reserves, the U.S. could triple its proved reserves and vault from No. 11 in global reserves to sixth, right behind Iraq. Then there's the really crazy part of all this. Look at the last line of that slide above: Pioneer didn't even include several other potential shale formations that are found in the Permian.

Getting more bang from a previously spent buck
The Permian is not a newly discovered formation that could be subject to a land-grab rush like we saw five to 10 years ago. Most of the acreage in the region is already claimed by the players noted above, possibly placing these companies in an absolutely amazing growth position for the next several years. The potential of the Permian Basin is enough to profoundly impact the total reserves on the books for all four companies.

What a Fool believes
So what exactly does this mean for these companies? It's hard to say exactly because geologic formations aren't uniform. Pioneer believes that some of its acreage encompasses up to nine layers of technically extractable resources, but its peers might not find corresponding resources. As more and more data are collected from the Wolfcamp and Spraberry shale layers, we will get a much clearer picture for each company individually.

Bottom line, though, there is a monumental potential in the Permian Basin that has yet to be accessed. Pioneer, Devon, EOG, and Occidental all have fantastic operations in the region today. Depending on how shale technology advances and the price of oil, these companies could be sitting on some of the most lucrative oil real estate in the world, which further solidifies their places among the best investments in the American shale boom today.