Telecom giant AT&T (NYSE:T) last week agreed to buy satellite television provider DirecTV (NYSE:DTV.DL). The news led to a quickly quashed rumor that Dish Network was about to be acquired by Verizon. And the deal drew comparison's to Comcast Corporation's (NASDAQ:CMCSA) recent acquisition of Time Warner Cable (NYSE: TWC). But why would AT&T want to buy DirecTV -- and why now?

AT&T will pay about $49 billion in cash and stock with the total transaction value coming in at $67 billion after accounting for DirecTV's debt. The number compares to the $45 billion equity value offered up in the Comcast-Time Warner merger, which still awaits final regulatory approval. But Comcast gained the instantly obvious advantage of both increasing its reach and eliminating a competitor.

What's so special about DirecTV that made AT&T buy it?

Strong subscriber additions
When Comcast was circling its Time Warner Cable acquisition, I mentioned that Time Warner needed to consider the sale because the company's subscriber numbers were tanking. And that was particularly true for Video subscribers -- a segment that's taken a hit across television companies as more subscribers cut the cord in favor of streaming services such as Netflix.

How have DirecTV's net subscriber additions measured up to the competition? 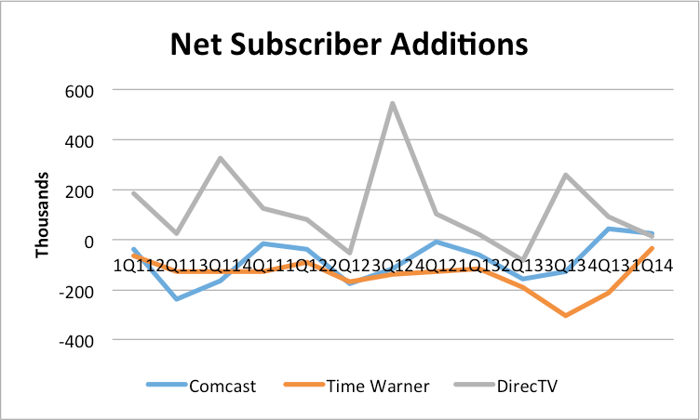 Time Warner has the losing seat despite a slight recovery in the first quarter. And DirecTV has spent most of the past three years with the most net subscriber additions, which also means the least net losses.

But comparing the net subscriber addition rate would only work if the companies all have similar numbers of total video subscribers. Here's where the numbers stood as of the first quarter:

Comcast and Time Warner do offer broadband services that continue to attract subscribers. But not at a rate that offsets the losses in video. So DirecTV has held its own in a competitive and turbulent market.

And DirecTV stands apart thanks to its growing presence in the emerging market of Latin America, which includes complete ownership of PanAmerica and 93% ownership of Sky Brasil. Those companies combined brought DirecTV first-quarter $1.7 billion in revenue and 361,000 net subscriber additions.

But how would DirecTV help AT&T?
AT&T doesn't need DirecTV to survive. The company remains a wireless leader with that segment accounting for more than half of first-quarter revenue. But that's not to say an approved DirecTV acquisition wouldn't have benefits.

Why does size matter? Look at the Comcast-Time Warner deal. Comcast certainly benefits from an increased reach -- and swallowing up a competitor -- but the growth gives the company more weight to through around in content negotiations. (And that's also why so many have expressed doubts that the Comcast-Time Warner deal will make it past regulators.)

And content has a more specific purpose in the potential AT&T-DirecTV deal. DirecTV has exclusive access to NFL's Sunday Ticket, which provides subscribers to watch the televised football game of choice, rather than what happens to broadcast on local channels or ESPN. But DirecTV's Sunday Ticket contract expires at the end of the forthcoming football season and renewing that contract will prove vital to AT&T's purchase.

Foolish final thoughts
AT&T doesn't absolutely need DirecTV, but the purchase also shouldn't pull down the overall business. The deal still has potential to problems due to regulator blocks or DirecTV's failure to renew the NFL contract. But if those go smoothly, the television expansion and added weight could help AT&T become less dependent on its wireless segment and move more toward becoming a general media company.

Editor's Note: A previous version of this article incorrectly stated that AT&T had 2.5 million U-verse TV customers. The Fool regrets the error.