If you invest in an Internet company outside of a select group of premier websites, you're putting at least a little bit of trust in Google (NASDAQ:GOOGL) (NASDAQ:GOOG) not to foul things up for you.

Last week, shares of RetailMeNot (NASDAQ:SALE) slid over 20% over the course of two days after a report from SearchMetrics found that the website's visibility had fallen 33% on Google's search engine. The decline came after Google released an update to its search algorithm, dubbed Panda 4.0. Considering that RetailMeNot receives approximately 65% of its traffic from search engines, this could be a huge blow to the number of people clicking on its coupon codes.

RetailMeNot is not alone in its vulnerability to Google's algorithm changes. Demand Media (NYSE:LEAF), the company behind eHow.com, has seen its traffic decline significantly since Google started rolling out the Panda algorithm and its subsequent updates. There are countless other companies that have been affected by Google's constantly updated ranking algorithm, and recent events show the importance of evaluating the risks such updates pose to your investments.

Let's examine why Google penalized these companies and what investors can learn from recent events.

What is Panda 4.0 exactly?
Google's focus, when it comes to search, is to provide the highest-quality sources to answer a user's query. With Panda, Google's goal is to reduce the prominence of websites with low-quality content and promote authoritative sources.

Panda 4.0 is just the latest major update to the algorithm. Google released the original version in 2011 and has made monthly updates since. Significant changes from the previous algorithm include more "user feedback signals" and a modification factor that applies to the entire site, not just individual pages, that can penalize spammy websites for every search term.

Overall, these updates affected about one-eighth of the Internet. The most recent update, 4.0, was said to affect 7.5% of websites.

How and why Google subverted Demand Media
Demand Media's most important property is eHow.com. The website accounted for 30% and 31% of the company's total revenue in 2012 and 2013, respectively. No other property accounted for more than 10% of revenue. Last year, eHow.com acquired half of its traffic from Google searches, according to the company's 10-K report.

Unfortunately for Demand Media and its shareholders, eHow.com is exactly the type of website Google is punishing with its Panda updates. The site's content is often vague and uninformative. The writers usually show very little, if any, subject expertise, and viewers quickly realize the site probably doesn't have the answers they were looking for.

Demand Media follows similar models for most of its web properties, which also rely heavily on search traffic. As a result, unique visitors across Demand Media's sites fell from 120 million before Panda to 88 million in January 2014. 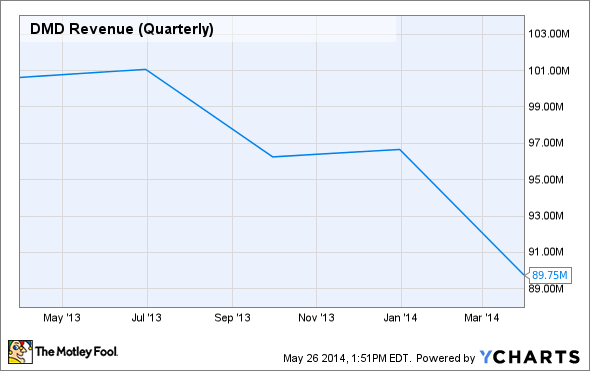 Does RetailMeNot deserve the same treatment?
RetailMeNot follows some spammy tactics when it comes to acquiring links to its site. The company has been criticized for this in the past, but the fact is that it doesn't do anything drastically different from its competitors. One factor that may (or may not) have affected RetailMeNot's search dominance in the past is its tie to Google Ventures -- the venture-capital arm of Google -- which supposedly gives it better access to the internal workings at Google.

Although RetailMeNot may have used questionable tactics to dominate Google's search results in the past, that doesn't mean the website itself is spammy or non-authoritative. (There aren't a whole lot of websites out there that are experts in Bed Bath & Beyond coupons.) Conversely, an eHow article about how to change your oil may have been better written by a mechanic on a car-centric website.

If you look at RetailMeNot's competition, the site actually performs its task admirably well. Out of all of the promo-code and deals aggregators, RetailMeNot is arguably the best of the bunch. It has a clear web layout, an active community that weeds out bad coupons, and a strong brand.

Still, that doesn't make it immune to penalties from Google. Considering, however, that RetailMeNot performs its function well and its biggest infraction was how it developed links to its website, it's likely this penalty is more temporary than the one for Demand Media.

Is your investment Google-proof?
Google is constantly working to provide the best product it can for its users. Companies with large exposure to Google as a source of traffic are at significantly more risk than sites that can organically attract audiences. Still, nearly every web property uses search traffic to some degree to create an audience.

The question investors need to ask before investing in a web company is how much authority the company's web properties have in their domains.

eHow.com and other Demand Media properties have very little authority. RetailMeNot has some authority, but Google saw its business practices as spammy. Spammy tactics can be overcome through a behavior change, but a lack of authority is nearly impossible to overcome.