Everyone wants to find a great stock that's trading at a bargain price. Some investors will spend hours poring through data on hundreds of companies to find one standout stock to anchor a portfolio. But it might be far easier than you think to find your next great investment -- especially if you start with the 30 stocks that make up the Dow Jones Industrial Average (DJINDICES:^DJI).

These 30 companies generally exemplify the qualities we look for in great long-term investments: They're established market leaders with sustainable dividends that have put together decades of strong growth in all sorts of economic environments. However, investing isn't simply about finding a stock with great past performance. We also want to find a stock that's cheaply valued relative to its peers, as these lower-priced stocks might offer superior growth, as long as their financial performance can convince the market that it's been pricing them too cheaply all along.

We could start with the trusty P/E ratio, or even go further and compare a stock's current P/E to its 10-year average P/E (which I recently wrote about -- you can click here to see which Dow stocks topped that ranking). Today, however, we'll be looking at the enterprise value to earnings before interest, taxes, depreciation, and amortization ratio, or the EV/EBITDA ratio, to assess the Dow's components on a level playing field, where debt is added to a company's valuation, but cash is subtracted, and where earnings are smoothed out by using pre-tax and pre-interest figures that haven't been reduced by non-business accounting expenses.

It may not surprise you much to discover that three of the Dow's lowest-P/E components -- AT&T (NYSE:T), Travelers (NYSE:TRV), and Verizon (NYSE:VZ) -- top our EV/EBITDA rankings; but you might also be surprised to find out that some higher-P/E stocks rank quite well on our list. Let's look at the three best EV/EBITDA stocks now, and you'll find a full table of all 30 Dow components, ranked from lowest to highest EV/EBITDA ratio at the end of this article.

Third-cheapest EV/EBITDA on the Dow: Verizon (6.15)
Verizon's 6.15 EV/EBITDA is not only one of the lowest of all Dow components, it's also far more consistent than the telecom's wildly variable P/E, including the normalized P/E that excludes one-time costs: 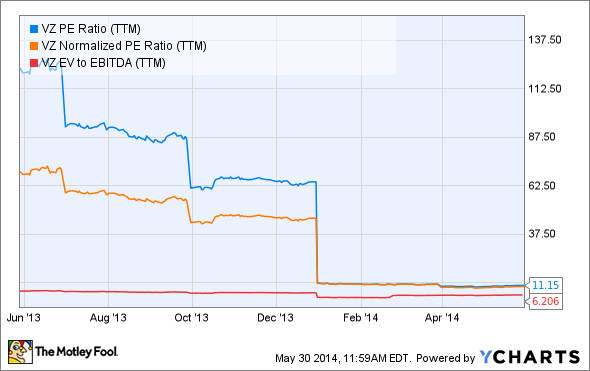 This is due, in large part, to the fact that Verizon's EBITDA has been far less volatile than its net income during the past few years, moving in a generally modest straight line upwards. Verizon's enterprise value has likewise moved higher at a much slower pace than its market cap. Both its EV and its EBITDA have increased by nearly the same amount, which has kept EV/EBITDA at rock-bottom levels for years: 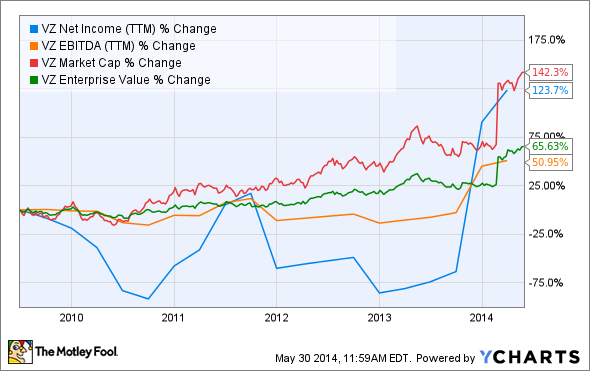 Second-cheapest EV/EBITDA on the Dow: Travelers (5.32)
Insurer Travelers closes in on the top spot with a microscopic EV/EBITDA ratio that's been built on the second half of the ratio's equation -- there's really not that much of a difference between Travelers' market cap and its enterprise value. 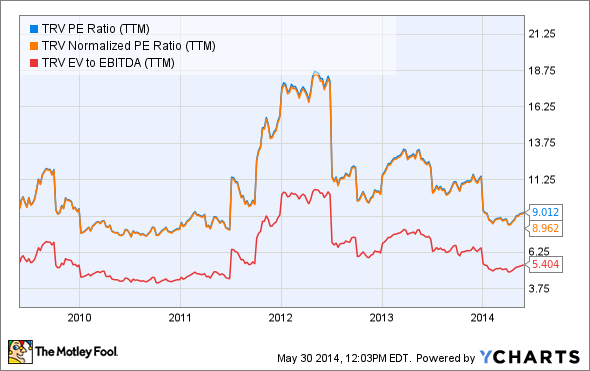 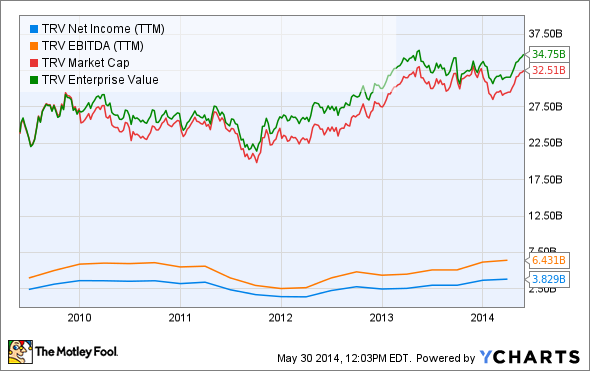 This isn't so unusual when you realize that many other insurers are in a similar boat. Many other major insurers boast an EV/EBITDA ratio that's roughly half their P/E, because insurance companies can make heavy use of amortization and other delayed expenses to smooth out their earnings over time. Travelers' depreciation and amortization alone takes out nearly a billion dollars from its operating earnings, and taxes sap a billion dollars, as well: 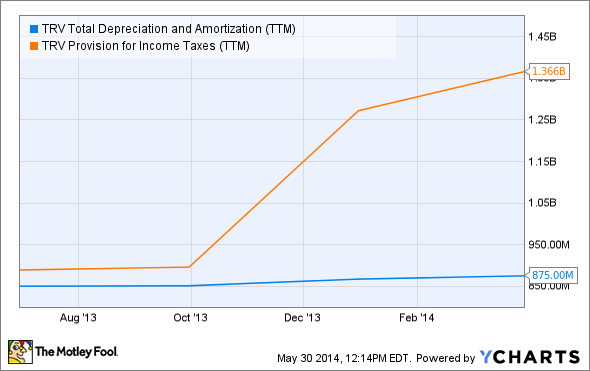 Cheapest EV/EBITDA on the Dow: AT&T (5.29)
AT&T barely edges Travelers for the lead in our EV/EBITDA rankings, but it does so with a ratio that's near its lowest level since the 1990s: 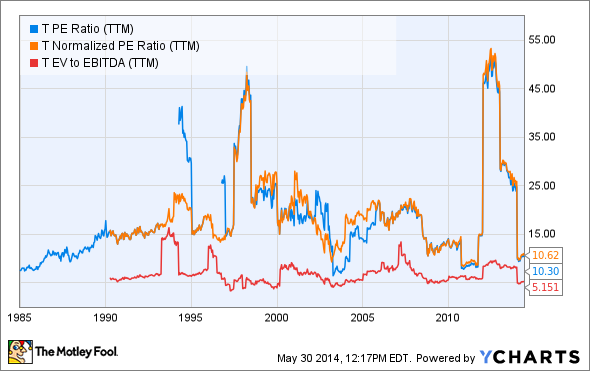 As it has with Verizon, EBITDA presents a much smoother picture of AT&T's earnings than net income, which has bounced around quite a bit due to one-time charges over the years. However, before diving into AT&T shares, it's worth considering the fact that its EBITDA has only grown by 20% during the past five years, which is a rather weak gauge of post-recession progress when compared to many of its fellow Dow components' soaring bottom lines. 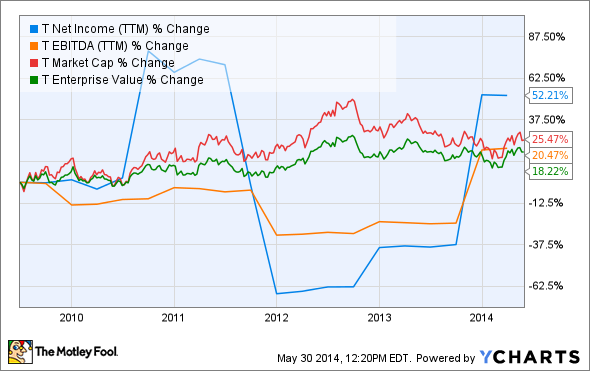