May 28, 2014 was both a good and mediocre day for shareholders of Michael Kors Holdings (NYSE:CPRI). Prior to Mr. Market opening, the company's management team announced revenue and earnings for the fourth quarter of its 2014 fiscal year. However, despite the business handily outperforming analyst expectations and even after the company providing shareholders with a rosy forecast, shares of the retailer rose just slightly more than 1% to close at $97.01 before falling 5% to $92.28 on May 29.

Moving forward, does this negative reaction mean that shareholders should move their money to a competitor like Ralph Lauren (NYSE:RL) or Coach (NYSE:TPR), or is there still plenty of room to run?

Michael Kors smashed forecasts!
For the quarter, Michael Kors reported revenue of $917.45 million. In addition to coming in 54% higher than management reported for the same quarter last year, the company's top line was 12% above the $816.15 million analysts anticipated.

By the end of its fourth quarter, Michael Kors operated 405 stores, a 33% jump compared to the 304 locations the business had last year. This, in conjunction with the 26% increase in comparable-store sales, was the primary driver behind the retailer's higher revenue.

From an earnings perspective, the company's metrics came in even stronger. For the quarter, management reported earnings per share of $0.78. This was 15% greater than the $0.68 analysts wanted to see and a jaw-dropping 56% improvement over the $0.50 the company earned this time last year.

One of the major contributors to Michael Kors' impressive bottom line was its strong revenue, but the company also saw modest cost reductions year over year. As an example, the business saw its cost of goods sold fall from 40.3% of sales to 40.1%, while its operating expenses declined from 33.6% of sales to 33.1%. These improvements, however, were partially offset by the company's share count, which rose almost 2% over the past year.

Should investors shop for one of its peers instead?
Over the past five years, Michael Kors has done exceptionally well. During this time frame, the retailer saw its revenue shoot up 552% from $508.1 million to $3.3 billion, while net income skyrocketed 1,588% from $39.2 million to $661.5 million. For the most part, the company's top-line growth came from a 324% aggregate comparable-store sales increase and a 282% jump in store count.

Its improved profitability can be chalked up to its higher sales but must also be attributed to significantly better operating efficiencies. This can be best illustrated by looking at the company's cost of goods sold, which fell from 47.5% of sales to 39.1%, and its operating expenses, which dropped from 37.7% of sales to 30.4%. 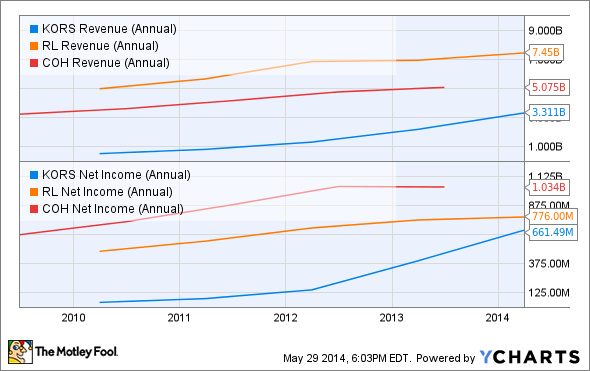 During a similar five-year period, neither Ralph Lauren nor Coach could keep up. According to the most recent financial statements, Ralph Lauren saw its revenue climb a more modest 50% from $5 billion to almost $7.5 billion, while Coach saw its top line increase 57% from $3.2 billion to $5.1 billion.

In the case of Ralph Lauren, the company benefited greatly from the 44% aggregate rise in comparable-store sales over this period but also saw a higher store count add to its top-line growth. Over a similar five-year period, Coach also reported higher comparable-store sales, and its number of locations in operation increased 41% from 675 locations to 953.

From a profitability perspective, Ralph Lauren and Coach did well but still could not keep pace with Michael Kors. Over the past five years, Ralph Lauren's net income jumped 62% from $479.5 million to $776 million, while Coach's bottom line grew 66% from $623.4 million to $1 billion. The largest contributor to increased profits for both businesses was an improvement in sales, but both companies also enjoyed reduced costs (in relation to sales) stemming from economies of scale.

Foolish takeaway
Based on the data provided, it's surprising why Mr. Market did not respond more favorably to the results Michael Kors posted. In addition to beating forecasts, the retailer posted a strong near-term outlook and has had a long history of explosive growth to boot. While there is no guarantee that the business can maintain its growth moving forward, the fact that it's still seeing attractive upside should incentivize the Foolish investor to consider the company as a nice prospective investment.