By the time the decade is out the United States may have turned the corner from a country spewing more carbon dioxide into the atmosphere than anyone in history to a path toward a clean energy future. The Obama Administration and the Environmental Protection Agency are proposing a 30% cut in carbon dioxide emissions, which could lead to a major change in how we get energy.

The goal of the rules is to reduce overall carbon dioxide emissions in electricity generation and will impact everything from coal producers to renewable energy. But it may not be as big a deal as you might think.

Massive solar projects like the 250 MW California Valley Solar Ranch being built by SunPower is changing the energy landscape and more are on the way. Image source: SunPower

The rules
Proposed rules state that carbon emissions are to be reduced 25% by 2020 and 30% by 2030 from 2005 levels. They'll be enforced on a state-by-state level with different goals and the ability to trade clean energy credits through cap and trade systems if they so desire.

Cap and trade will allow power plants in Alaska, for example, to continue generating power from coal or natural gas that is most economical while buying clean energy credits from California or Arizona where it's more economical to build cleaner energy. With California already approaching its own renewable energy goals and building solar at a rapid rate, it may not even be an issue to meet the goals being outlined in Washington, D.C.

A change that's already happening
While the EPA's rules seem to be a game changer, it may not actually have that much impact on utilities. Coal plants have been shut down by the hundreds in the last decade and cleaner burning natural gas is now the biggest electricity producer in the country.

A report by the EPA released in April shows that carbon dioxide production as a whole was down 12% from 2005 to 2012 and in the electricity generation industry was down 16% over that timeframe. If we simply project out another eight years the power industry may already have met its 30% goal even without a mandate. 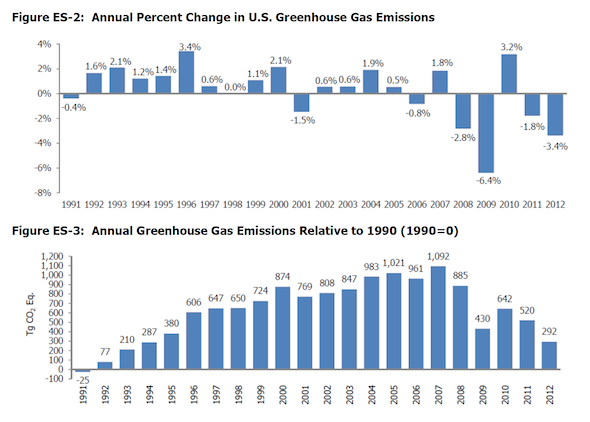 The driver of this shift has been falling costs for natural gas, wind, and solar, which are rapidly replacing coal power generation across the country.

Utilities are adapting to a shift in energy
Duke Energy (NYSE:DUK) has made one of the biggest turnarounds, closing down nine coal-fired plants and now owns 150 MW of solar plants at 21 sites. Over $3 billion has been invested in wind and solar projects since 2007. Duke Energy isn't going to be following the same path as every utility or power generator nationwide, but as one of the largest utilities in the country it's a proxy for those in the industry. 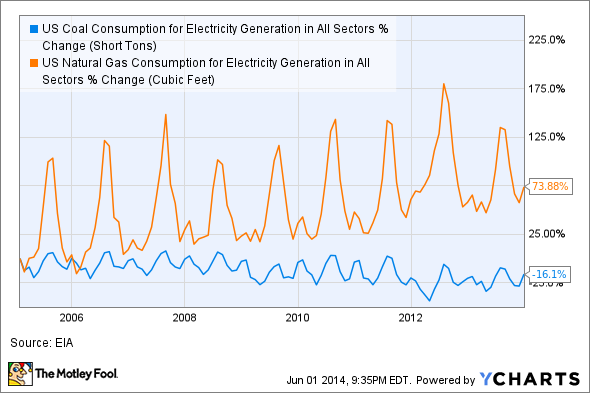 U.S. Coal Consumption for Electricity Generation in All Sectors data by YCharts

NRG Energy (NYSE:NRG) is another utility to keep an eye on, putting nearly all of its growth focus on renewable energy. Last year, it even launched NRG Yield, which owns solar assets that pay consistent rates of return because of long-term power purchase agreements and in turn pays investors a dividend with those cash flows. It also bought a residential solar installer who may make it the first major utility to become a major residential solar installer.

Edison International (NYSE:EIX) is another utility and power plant owner that's making a shift to renewables. Three years ago it announced 250 MW in projects to build solar on commercial rooftops around southern California. It is also one of the largest buyers of solar energy from third party producers and has a large density of residential solar owners. That's why it won't see much of an impact because it's already getting a lot of power from renewables. In fact, it could see a benefit if it can sell renewable energy credits, although given the reduction the country has already seen in emissions they may not be all that valuable.

What's remarkable is how fast the shift away from coal and toward natural gas and renewables in particular has taken place. Solar accounted for 29% of all new generation built in 2013 and was 74% of new capacity in the first quarter. Wind was 7% of new installations last year.

The impact on utilities won't be as big as you think
While headlines and warnings from coal producing states will be rampant today, the EPA's carbon dioxide rules won't likely have a meaningful impact on the future of energy. The ball was already rolling toward a cleaner energy future and as I said last month, that's driven by economics, not politics. Utilities are adapting and if you're buying into the industry it's worth reducing risk and going with companies already on their way to meeting the goals outlined today.

Did the EPA Just Kill Utilities as We Know Them? @themotleyfool #stocks $EIX $DUK $NRG Next Article
Current