For the last 40 years, ANSYS (NASDAQ:ANSS) has been in the business of simulating physical environments in software. Though the company has tens of thousands of customers across dozens of sectors, it's not a household name and it's likely overlooked by many investors. Let's see whether ANSYS makes for a long-term value play that you should get on your watch list.

A well-run company
First and foremost, ANSYS's software provides a solid and unique value to customers: the ability to make engineering changes more quickly and more cheaply through simulation. ANSYS serves industries ranging from semiconductors to aerospace, but its software has traditionally been used most intensely in high-end use cases. A specific and impressive example is Formula 1, where four out of the top six racing teams use ANSYS for aerodynamic testing.

From the perspective of an investor, ANSYS has a very healthy balance sheet. As of the first quarter of 2014, ANSYS has $857 million in cash, and since last July, the company is debt-free. In addition, revenue for 2013 was $861 million, an 8% increase over 2012. More importantly, the company managed $245 million of net income from that revenue, a 20% increase, year-over-year.

An expanding market
Last year, industry analyst Technavio estimated that the computer-aided engineering market is set to grow at an annual rate of 11.1% by 2016. Looking further down the line, ANSYS believes that the engineering simulation industry could be worth as much as $20 billion within five to seven years; this is based on assumptions about the increasing number of users and the intensity with which those users will use simulation software.

Another way to evaluate ANSYS's prospects is to look at complementary and competing products. Autodesk (NASDAQ:ADSK), for example, which sells computer-aided design software that integrates with ANSYS, also provides simulation capabilities that compete with ANSYS. While revenue growth at Autodesk is currently slow due to a transition from a license-based model to a subscription model, management predicts a compound annual growth rate of 12% by 2018. A part of this growth is certainly attributable to a healthy market that will also benefit ANSYS.

Democratization of simulation
Another factor that gives credibility to ANSYS's projected growth numbers is what the company calls the "democratization of simulation." Expensive hardware and complicated software have traditionally formed barriers to the kind of end markets that would use simulation software. ANSYS is continually improving the usability of its software, but even more importantly, high-performance computing is becoming both more powerful and more affordable.

In particular, NVIDIA (NASDAQ:NVDA) has adapted its GPU technology so it can be used to speed up scientific computations. ANSYS and NVIDIA have collaborated to provide GPU acceleration in mechanical and fluid simulation, with typical results showing a two-times speedup over ANSYS simulations run without a GPU. Tesla, NVIDIA's high performance computing GPU currently costs around $5,000, putting it in reach of many smaller enterprises that could benefit from engineering simulation.

The right moment
Not surprisingly, ANSYS's share price has followed the company's performance and has climbed steadily for years. However, shares have dipped recently. 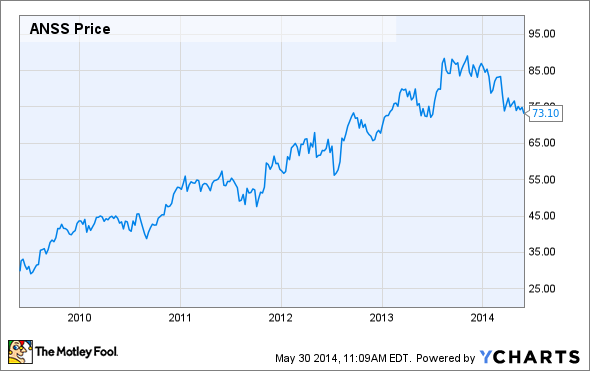 Many momentum stocks in the tech space, including ANSYS, dropped toward the end of March, and sentiment in the market has shifted. However, ANSYS is a well-run company with a solid product, and it's operating in an expanding market. Also, the company's share price has recently taken a  dip that wasn't necessarily justified by its performance.