Anyone who follows the semiconductor industry knows that the top dog when it comes to anything and everything mobile is Qualcomm (NASDAQ:QCOM). From the lowest-end smartphones to the highest-end flagships, the company has a perfectly suited product for each category. However, as the high end of the smartphone market slows, and as next-generation semiconductor manufacturing technology becomes more expensive on a per-transistor (that's the building block of a chip) basis, Qualcomm may run into economic difficulties. 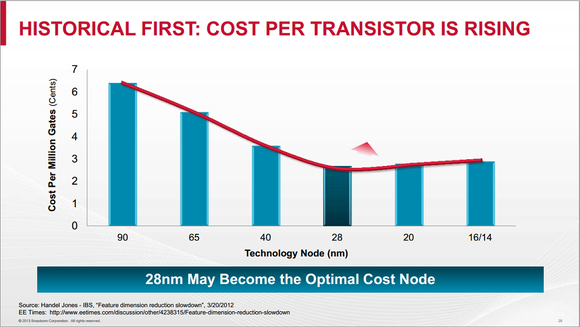 You might think that this cost increase isn't all that bad, but the mere fact that it increases at all is devastating. Take Qualcomm's 28-nanometer Snapdragon 800. According to Chipworks, the die-size comes in at about 118 square millimeters. Given that Apple's A7 -- built on a similar 28-nanometer process -- can pack about 1 billion transistors into about a 102 square millimeter area, we can conclude that the Snapdragon 800 has roughly 1 billion transistors.

Who eats this cost?
Assuming the cost per transistor information above is accurate, someone is going to eat these increased costs. Will it be the handset OEMs like Samsung (NASDAQOTH: SSNLF) and LG in their perpetual race to win the benchmarks? Does Qualcomm take the hit? Looking beyond 20-nanometer, will the industry really be so eager to adopt these next-generation technologies and to put their focus on the slow-growing premium phone market?

Interestingly enough, at the J.P. Morgan Global Technology, Media and Telecom Conference, Qualcomm CFO George Davis noted that the company's QCT division would probably not hit the company's long-term 18-20% operating margin targets this year due to the ramp-up of 20-nanometer products. This suggests that TSMC, the industry's leading foundry, is the primary beneficiary here. While Qualcomm is probably passing some of the increased costs to the device vendors, Davis' comments suggest the company will absorb some of those expenses as well.

Foolish takeaway
Unless cost per transistor resumes its historical trend of declining substantially in subsequent generations, we are likely to see stagnation at the high end of the mobile chip market as the economics begin to break down. Interestingly enough, while TSMC's actual manufacturing costs may be trending upward per transistor, the foundry industry has essentially consolidated into two general purpose players at the leading edge: TSMC and Samsung.

With only two choices, the cost per transistor increases may come from both foundry manufacturing costs and a realization that the fabless players have, more or less, nowhere else to go. Qualcomm, as cash rich as it is, probably doesn't want to make the huge capital investments required to build its own fab, nor does it want to fund the continual research and development required to keep up with the foundry players.