In recent years, Boeing (NYSE:BA) and Airbus (OTC:EADSY) have invested heavily in new technology to reduce airlines' fuel and maintenance costs. Boeing and Airbus have used their new aircraft programs to stir up customer interest, with each averaging over 1,000 orders per year for the last few years.

Boeing and Airbus have been in a race to introduce new, more efficient airplane models. Photo: The Motley Fool

Delta Air Lines (NYSE:DAL) isn't interested. Delta has distinguished itself among the four largest U.S carriers by eschewing big orders for state-of-the-art jets. This week, Delta once again zigged while the rest of the airline industry zagged. It snapped up some of the last delivery positions for the current-generation Airbus A321.

Delta's love affair with older planes
Airbus and Boeing are both working to redesign their best-selling narrow-body jets with new engines, winglets, and other advancements that will reduce operating costs. Most airlines have been jostling to get early deliveries of these new, more-efficient planes.

Meanwhile, Delta has added a hodge-podge of used aircraft to its fleet, including MD-90s and -- most recently -- Boeing 717s. Delta has also bought some new aircraft, but even here it has gravitated toward older models for thre reasons.

Delta has not felt the need to splurge on the most up-to-date aircraft technology. Photo: The Motley Fool

First, older models use proven technology. (Early operators of Boeing's Dreamliner learned about the operational risks of cutting-edge technology the hard way.) Second, they are cheaper to acquire than state-of-the-art planes. Third, they don't have long waiting lists!

More A321s for Delta
By the end of next year, Airbus is expected to start delivering A320neo models featuring new, advanced engines. However, the current-generation A320 family will remain in production until 2018. Last September, Delta ordered 30 Airbus A321 aircraft for delivery in 2016 and 2017 to take advantage of discounts on the soon-to-be-discontinued model.

Apparently, Airbus still had a few open delivery spots left, because Delta announced on Monday that it will take another 15 A321s in 2018. Delta is also in the midst of adding 100 Boeing 737-900ERs to its fleet by 2018. In total, Delta will have purchased 145 new narrow-bodies by 2018 during the last few years of production for the current models.

These large narrow-bodies are already so efficient that Delta is happy to forgo the next-generation engines of the A320neo and 737 MAX aircraft programs in return for discounts. To reduce per-seat fuel consumption, Delta is squeezing as many seats onto these planes as possible: 180 on the 737-900ER and 192 on the A321. At this density, the current generation 737-900ER and A321 actually have lower unit costs than smaller versions of the next-generation models.

Foolish final thoughts
While its competitors have placed big bets on next-generation airplanes from Boeing and Airbus, Delta has saved billions of dollars by making do with a combination of used aircraft and current-generation new planes. Delta's innovative fleet strategy has allowed it to steadily reduce its net debt in the last five years while still replacing planes that had reached the ends of their useful lives. 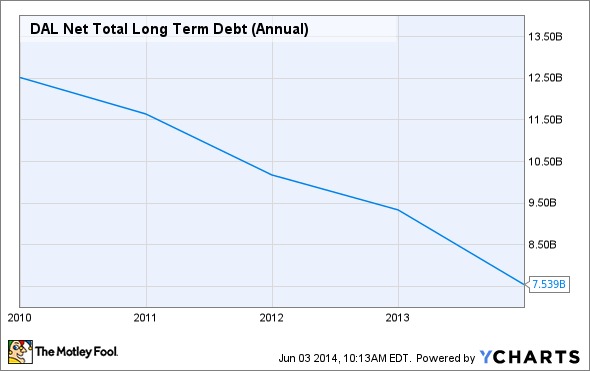 With Boeing and Airbus scheduled to end production of their current-generation narrow-bodies in the next five years or so, it's not surprising that Delta went back to order more A321s this week. After all, this could be its last crack at cheap new planes for the foreseeable future. The A321 will help Delta continue posting industry-leading earnings and cash flow for many years to come.