A quick look at aerospace-focused component manufacturer Precision Castparts' (NYSE:PCP.DL) share price reveals much about the market's mood in 2014. After a good 2013, the stock is down 6% this year. It's almost as if the market has already priced in a cyclical recovery in the aerospace sector, and is now asking, "What next"? Indeed, the share price of its major customer, The Boeing Company (NYSE:BA) is also down year to date, while its peer Triumph Group (NYSE:TGI) is also down. Is the market right to worry, or is this weakness a potential buying opportunity?

It's no secret in the investing world that industry peer groups tend to move together, but that doesn't mean that the movements always make sense. In this case, Precision Castparts' prospects actually have gotten better in 2014, while Boeing and Triumph Group have both had issues as the year developed.

Triumph Group started the year by lowering its full-year guidance up to March 2014 by $0.50 to $4.75, but as Fools already know, its issues were a largely due to company-specific operational issues on Boeing's 747-8 program. In other words, Triumph incurred extra costs in replacing parts with quality issues. In addition, the company saw after-market demand from military aircraft come in weaker than expected -- more on the issue later in connection with Precision Castparts. The key point is that these issues were largely company specific.

Turning to Boeing, its operational performance has been mixed in 2014. Boeing's key objectives for 2014 are to keep growing its order book, ramp up build rates (particularly on its 737 and 787 programs), and try and increase its commercial operation's margin. On the plus side, the latest results saw Boeing affirm its plans to ramp up 787 and 737 production rates, and manage to grow its core and commercial operating margin. On the other hand, Boeing has had well publicized production issues with the 787. These issues could raise fears that it will struggle to grow margins in future, in the face of having to produce evermore more complex aircraft.

No problems at Precision Castparts
While Boeing and Triumph Group have had their issues, Precision Castparts beat EPS estimates in its March quarter, and analysts have been busy raising their estimates for 2015 and 2016. A quick look at its segmental operating income for 2013 demonstrates how the company generates income. 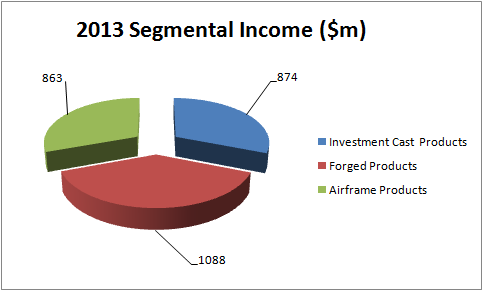 Across its segments, the most important end market is aerospace, contributing 68% of total revenue, then comes power with 18% and finally general industrial with 14%. Essentially, Precision Castparts is a commercial aerospace play with 79% of its aerospace sales coming from the commercial side, only 15% from the military, and 6% from regional aerospace. Moreover, there are four reasons why investors can look favorably on the company going forward.

First, while Precision Castparts isn't as exposed as Triumph Group is to military spending, it can still make an important marginal difference. In fact, sales of its investment casting products were down 1% in the fourth quarter, with a 20% decline in its military/regional business jet sales offsetting the 8% increase in large commercial sales. The good news is that management sees stability in its military/regional sales -- CEO Mark Donegan said on the conference call that "[We] definitely expect to see military spares recover as we move in the second half of fiscal year 2015".

Second, the fact that Boeing is on track with its build-out rates for the 737 and 787 is good news for Precision Castparts, because it's a major fastener supplier to the programs. Moreover, as discussed in an article last year, Precision Castparts was ramping up production capacity in anticipation of Boeing's increased build out rate.

Third, its acquisition of Aerospace Dynamics International, or ADI, for $625 million in March is going to help diversify its income stream, because according to Donegan, ADI has a "very strong position on the Airbus A350". Precision Castparts is formally known as primarily being a Boeing supplier, so the ADI deal helps de-risk the stock.

Fourth, Donegan also outlined that the company had "won a substantial share on the narrow-body reengining programs, and we still have additional opportunities coming through". This is good news, because narrow bodied aircraft continue to dominate airplane sales. For example, Boeing's 737 (its only narrow-bodied plane currently in production) has been responsible for 82% of its net orders since 2009.

The bottom line
All told, Precision Castparts looks well placed to prosper, provided the aerospace market continues to grow. Triumph Group and Boeing both have had difficulties in 2014, but Precision Castparts, at least on an operational basis, has seen its prospects improve. Analysts have its EPS growing at 18% and 13% over the next two years, respectively. On a forward P/E ratio of 18 times earnings, the stock isn't particularly cheap, but it looks relatively well positioned within its sector.