Uranium prices are still depressed, but junior uranium miners have performed well this month. Could the bottom have been reached in the price of u3o8?

The overall sentiment about uranium has never been worse; this has been beneficial for junior miners this month. Contrarian investors are taking positions because they think the worst is behind, and M&A activity will soon start. 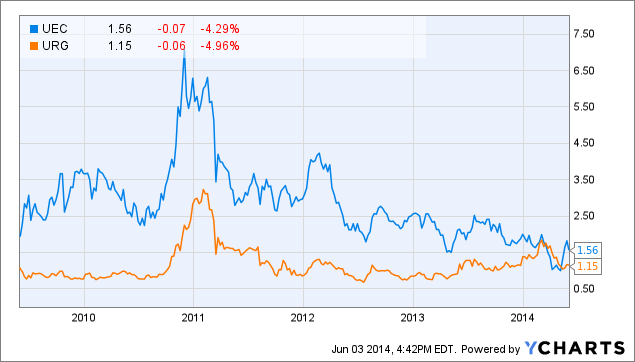 A rebound in the price of u3o8, better known as uranium, could happen anytime soon. The Fukushima Daiichi disaster in Japan on March 11, was a catastrophe for the price of uranium, but things will get better despite the fact that the Japanese court ruled out a restart plan of two nuclear reactors last week.

Anti-nuclear suits brought by civilians could have a temporary effect, but in the end the government decides. So Japan's nuclear reactors will be brought back in operation going forward. On April 11, 2014 the government of Prime Minister Shinzo Abe decided on a national energy policy that backs the use of nuclear power.

Uranium rebound could be near
The spot price of uranium just recently collapsed below $30 per pound, more than a 50% decline from the price prior to the Fukushima disaster. The long-term outlook for uranium is still intact and is once again being seen favorably, especially by emerging countries such as India, Russia, and China. The supply cut from major miners such as Paladin and Cameco will also lead to increased demand. Much demand will come from China.

The low price in uranium may be the catalyst to look for higher grade and more economic viable uranium deposits. Junior miner Uranium Energy Corp., for example, announced on May 20, that it has acquired the Longhorn Project in Texas. Located in Live Oak County, this specific area has a long history of significant uranium production.
The South Texas Uranium Belt has several development projects going on with near-term production potential, including the Longhorn Project.

This current low price of uranium may be causing a uranium rush for these low-cost production deposits and could finally lead to M&A activity between uranium miners.

Growth is coming your way
The 2014 Annual Report of the AAPG Energy Minerals Division Committee gives an interesting insight about the state of the state of uranium in the world. James Conca, Ph.D., a member of the Advisory Group of this UCOM, contributed an article on Forbes giving a short and brief overview of the report. Highlights of the report include:

Final note
The U.S. Energy Information Administration recently released its International Energy Outlook 2013. This report projects that world energy consumption will increase by 56% between 2010 and 2040, to a level of 820 quadrillion Btu from 524 quadrillion Btu.

The urgency for electricity, for example, has never been greater, fueled by emerging market growth. Since 1980, worldwide electricity consumption has tripled and is forecasted to grow by 70% over the next two decades. Cameco, one of the world's biggest uranium producers, plans to increase its production to 36 million pounds annually by 2018, an increase of 60%. Despite the depressed price of uranium, junior miners such as Uranium Energy could be interesting investments going forward. The current stock prices bode well for some M&A activity in the sector.