Investors love stocks that consistently beat the Street without getting ahead of their fundamentals and risking a meltdown. The best stocks offer sustainable market-beating gains, with robust and improving financial metrics that support strong price growth. Does General Electric Company (NYSE:GE) fit the bill? Let's take a look at what its recent results tell us about its potential for future gains.

What we're looking for
The graphs you're about to see tell General Electric's story, and we'll be grading the quality of that story in several ways:

What the numbers tell you
Now, let's take a look at General Electric's key statistics: 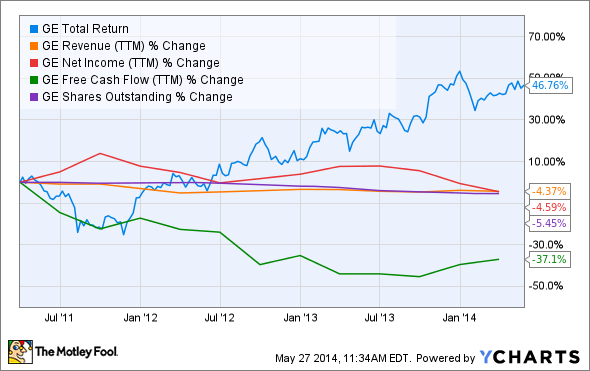 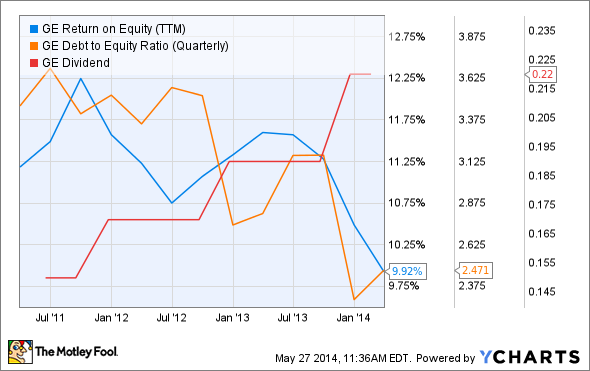 How we got here and where we're going
GE's performance has deteriorated since we first examined it last year as the industrial giant racked up only three out of nine possible passing grades -- half its original score -- in its second assessment. GE's bottom line has slipped into a tailspin from last year's positive momentum, which has cost it two of last year's passes, and an ongoing decline in free cash flow has pushed its free cash flow payout ratio to its highest level since the financial crisis. Moreover, GE's stock growth has also outpaced its fundamentals for the second year in a row, which may not be sustainable for much longer. Can GE turn its fundamental weaknesses around and rebound this year? Let's dig a little deeper to find out.

General Electric, which has long been identified with electricity, has been increasingly focusing on technological improvements to unlock the world's oil and gas resources. The company recently signed a partnership with Devon Energy (NYSE:DVN) to work on advanced drilling technologies and water treatment innovations for unconventional shale projects, and GE and Chevron's (NYSE:CVX) technology alliance developed the Safire flow meter, which is being tested at Chevron's domestic production locations.

GE also continues to scale up its investments in wind technology, with a 4.1 MW turbine developed for the offshore environment that could capitalize on Department of Energy goals to cut offshore wind costs by 63% by 2020. GE could also benefit from a recent ruling by the D.C. Circuit Court of Appeals, that eliminates utility-level fees for nuclear waste disposal -- as Fool clean-tech specialist Maxx Chatsko notes, GE's Advanced Recycling Center can reduce the volume of used nuclear fuel produced in older reactors by 96%, which could effectively solve the disposal issue in a productive way.

Maxx Chatsko also notes that General Electric is poised to become a global leader on the back of key growth segments such as health care, energy and the industrial Internet. GE's already acquired Thermo Fisher Scientific's (NYSE:TMO) life sciences division for $1.1 billion, which should complement GE's existing (and significant) health care resources. GE also has ambitious plans for the Internet of Things, which it plans to commercialize under the moniker "Industrial Internet," and which it projects will contribute between $10 trillion and $15 trillion to global GDP by 2035.

The company is also in a fierce battle with Germany's Siemens to acquire French conglomerate Alstom's energy segment for $17 billion, which could boost GE's power and water revenue by 60%. GE's evident refocus on industrial manufacturing makes Alstom's energy assets a great fit, as that business is expected to contribute roughly $0.08 to $0.10 per share in earnings by 2016 and create more than $1.2 billion in cost synergies by 2020. However, the company faces strong opposition from the French government over this acquisition, which could undermine its expansion efforts in the near future.

As a major aerospace supplier, GE should also benefit from the Federal Aviation Administration's approval of Boeing's (NYSE:BA) 787 Dreamliner for extended operations late last month. My fellow writer Steve Heller points out that GE subsidiary Morris Technologies has been manufacturing 3-D printed fuel nozzles for upcoming Leap jet engines, which are expected to enter service in the next few years.

Putting the pieces together
Today, General Electric has few of the qualities that make up a great stock, but no stock is truly perfect. Digging deeper can help you uncover the answers you need to make a great buy -- or to stay away from a stock that's going nowhere.