June 3, 2014 wasn't a great day to be invested in casino operators. After news broke that the gaming market in Macau, the world's premier gambling region, had grown slower than analysts anticipated, shares of companies like MGM Resorts (NYSE:MGM), Las Vegas Sands (NYSE:LVS), and Melco Crown Entertainment (NASDAQ:MLCO) fell significantly. In light of these recent developments, is now a good time to buy into these businesses, or is this the beginning of a decline for them amid a world of slower growth?

Macau's growing slower than anticipated
For the month of May, gross revenue in Macau rose 9.3% to $4.1 billion from the $3.7 billion recorded in the same month last year. While this is a nice turnout for the industry, it fell shy of the 14.8% increase (to an estimated $4.3 billion) analysts expected. Even so, the year-to-date performance of the industry shows that gaming revenue has jumped 15.8% from $17.9 billion last year to $20.8 billion for this year.

Looking back, the largest contributor to the region's year-over-year improvement came during the month of February. According to the Gaming Inspection and Coordination Bureau of Macau, the gaming market saw revenue expand a jaw-dropping 40.3% from $3.4 billion to $4.8 billion. Without this month, the region's increase in revenue would have only amounted to 10% year to date. Since then, the monthly increase in revenue has been slower on a month-to-month basis.

Casinos have been on fire!
Over the past five years, casino operators have done very well. Between 2009 and 2013, MGM Resorts saw its revenue climb 64% from $6 billion to $9.8 billion, while its net loss narrowed from $1.3 billion to $156.6 million. Although the company's bottom line hasn't been all that great, the fact that losses fell while sales jumped is a strong indicator that the business is improving. However, MGM Resorts has probably been the worst of the three profiled here. 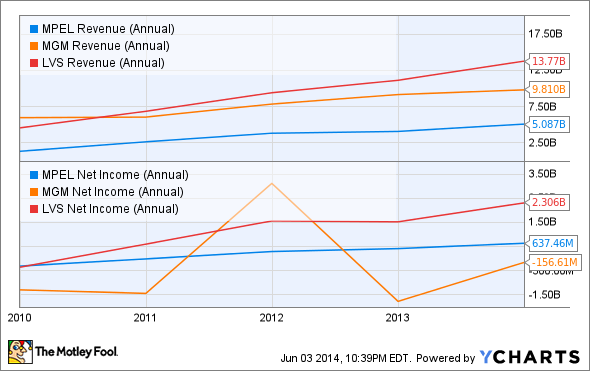 During the same five-year period, rival Las Vegas Sands blew MGM Resorts out of the water. Between 2009 and 2013, the company saw its revenue soar 202% from $4.6 billion to $13.8 billion while its net loss of $354.5 million turned into a gain of $2.3 billion. Perhaps a more interesting play on the casino business, however, has been Melco Crown.

Over the past five years, Melco Crown managed to grow its business by a jaw-dropping 282% from $1.3 billion to $5.1 billion. While undergoing this growth spurt, the business has seen its net loss of $308.5 million morph into a gain of $637.5 million.

But which will be hurt most by lackluster results from Macau?
All three casino operators have done well for themselves recently, but the big question the Foolish investor should be asking him or herself is which one has the most at stake in Macau failing to meet expectations. Although each business has a sizable piece of their revenue coming from the region, the biggest potential loser could end up being Melco Crown.

As of the end of its most recent fiscal year, Melco Crown derived 100% of its sales from the region, which means that the company's pure play nature could have shareholders hit hard if the industry takes a beating. Perhaps seeing the market's potential as being limited or with a hope of diversifying its revenue stream for safety's sake, Melco Crown has been in the process of building its City of Dreams Manila resort in The Philippines, which is set to open later this year.

The second most exposed casino giant in the region appears to be Las Vegas Sands. As of the end of its 2013 fiscal year, the company attributed 65.3% of its revenue to Macau. This is up from 52.4% of sales two years earlier and is proof that management is confident in the company's ability to grow its presence and in the region's capacity for generating revenue.

The least exposed of the three casino businesses profiled here happens to be MGM Resorts. According to the company's most recent annual report, the business generated just 33.8% of sales from Macau in 2013, up from the 19.5% reported in 2011.

Foolish takeaway
Based on the data provided, it's clear that Mr. Market isn't very happy with the news coming out of Macau and is scared of what this apparent slowdown means for companies with a presence there. Moving forward, it will be interesting to see how things progress, but for the Foolish investor looking to invest in a strong casino operator with limited exposure to the region, MGM Resorts might make for a promising prospect. Meanwhile, for those who believe the slump is temporary, Melco Crown and Las Vegas Sands seem to provide the most upside given its strong foothold in the industry in Macau.