At Computex 2014, Intel (NASDAQ:INTC) demonstrated a whole host of tablet-related technologies, from its Bay Trail system-on-a-chip launched late last year, to the more recent Merrifield and Moorefield chips intended for both Android phones and tablets. While the designs and the chips were certainly impressive (indeed, some of the design wins that Intel has look exceptionally compelling), one upcoming product, known as Cherry Trail, was conspicuously absent at the event.

Hey, what's a Cherry Trail again?
For a more detailed look, see my article "A Tale of Intel's Cherry Trail," but Cherry Trail is a tablet-oriented system-on-a-chip targeted toward the higher end of the tablet market. It's Intel's first low-power system-on-a-chip built on the company's 14-nanometer FinFET process and should sport significant improvements in graphics, video encoding and decoding, and memory bandwidth, as well as a pretty healthy bump in CPU performance as this part introduces the next-generation Airmont CPU core. 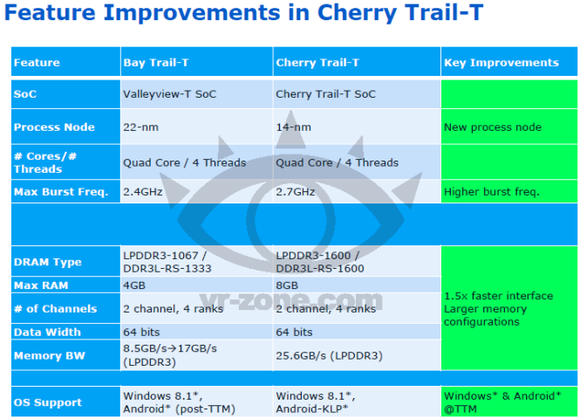 In terms of performance, it's hard to imagine that this part won't be best-in-class, particularly as the CPU performance in the prior-generation Bay Trail is still world-class nine months after its launch. Further, Intel appears to be bringing in an all-new graphics architecture (Gen. 8) and will be packing roughly four times the graphics "cores" as in the prior-generation Bay Trail product. In short, from what we've seen leaked, this thing should be an absolute performance monster.

Where is it, then?
In Mobile and Communications Group VP Hermann Eul's keynote at Computex 2014, the executive confirmed that Cherry Trail would launch at the end of the year, although this doesn't directly contradict CEO Brian Krzanich's claim that this product would ramp during the first half of 2015. Further, import and export data from Zauba suggests that Intel is producing quite a few Cherry Trail parts, so it's not as though Intel couldn't have trotted a reference tablet on stage if it wanted to. The question, then, is why Intel didn't show this product off.

Let's be honest; there was no need
Intel's progress in tablets has been quite superb over the past several months. It now has complete control over tablets powered by Microsoft's (NASDAQ:MSFT) Windows 8.1 and has been able to enable such devices at even the $100 price point. The argument that Windows RT (powered by ARM Holdings (NASDAQ:ARMH)-compatible chips) would be required for such price points has now been thoroughly debunked. Bay Trail looks wildly successful on the Windows front.

Further, while ARM-compatible chips dominate the Google (NASDAQ:GOOG) (NASDAQ:GOOGL) Android tablet landscape, Intel's partners demonstrated a broad swath of very competitive products based on both the Bay Trail silicon (which works on both Windows and Android) as well as the Android-only Merrifield and Moorefield intended for both tablets and phones. While some will claim that Intel is "giving away" these chips, the fact is that the performance on these products is very strong, lending credence to Intel's claims that the contra-revenue offsets are really just that -- to offset a high platform bill of materials.

In short, Intel's design win and product lineup in tablets is strong enough today that the company probably saw no need to talk up future parts.

Foolish bottom line
As a technology enthusiast and Intel investor, I would have found it interesting to see the first 14-nanometer low-power system-on-a-chip in action at Computex. However, given that the current 22-nanometer lineup is surprisingly competitive and is gaining some real traction in tablets that people might actually want to buy, it ultimately turned out to not be necessary.