Intel's next-generation tablet chip looks compelling, but it will likely be short-lived.

Many investors who follow Intel (INTC 1.11%) know that the company's first-generation 22-nanometer tablet platform is known as Bay Trail. The platform was recently revealed to have some pretty serious bill-of-materials deficiencies that are leading to a fairly aggressive contra-revenue campaign. But for the first time in Intel's history, it is performance-per-watt competitive with the finest chips from its more mobile competitors. It still lacks the level of integration necessary to really win the broader tablet market profitably, but it's definitely a good platform.

Meet Cherry Trail
The next-generation tablet platform from Intel will be known as Cherry Trail. This is the first 14-nanometer tablet processor from Intel and a look at the initial specifications that have been floating around the web show that it will be a pretty substantial improvement over the Bay Trail platform. 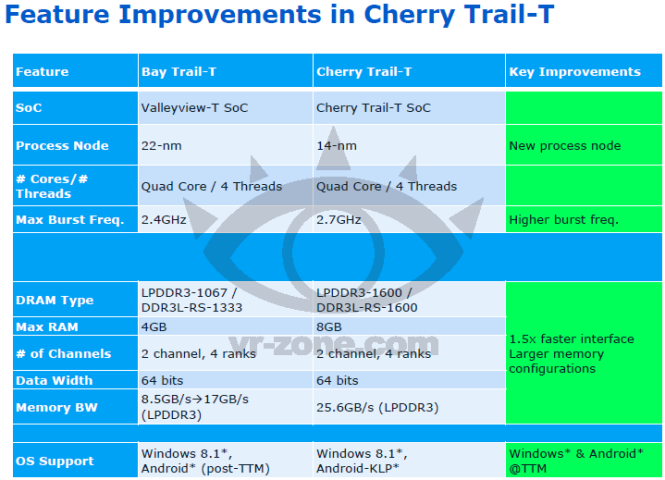 Right off the bat, we see that this platform will support more and faster memory. It will support Android at launch -- which Intel's Bay Trail-T failed to do. It will see a clock-speed improvement on the CPU side, and there will likely be some modest per-clock performance enhancements, to boot. This initially seems like a pretty solid platform. However, the platform's biggest improvements are detailed in another slide.

A much-needed graphics boost
What the prior slide doesn't talk about is the absolutely gigantic improvement in graphics performance that this platform will bring over the prior Bay Trail-T, 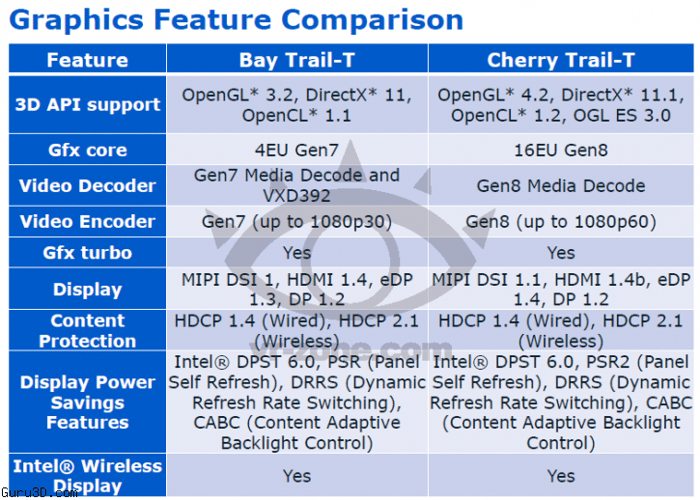 While this chart may seem a bit cryptic, the salient points are the following:

In short, it looks like Intel is finally trying to take a leadership position in graphics rather than simply trying to have a "good enough" graphics block, which, against competitors Qualcomm (QCOM 1.20%) and NVIDIA (NVDA 1.96%), is a losing strategy for higher-end tablets.

The competitive landscape gets tougher, however
Keep in mind that Cherry Trail will be going up against Qualcomm's Snapdragon 805 or, potentially, a next-generation Snapdragon built on a 20-nanometer process. It will also face off against NVIDIA's Tegra K1, which also sports some pretty hefty graphics capabilities -- although with it being built on a 28-nanometer process, it may be at a disadvantage to a 20-nanometer Qualcomm part.

With a 14-nanometer part available in 2014, Intel had a chance to really pull ahead in tablets with Cherry Trail-T. This, of course, is predicated on the notion that Intel allocates the proper amount of die area to graphics and that it get its graphics architecture to be much more competitive on both a performance-per-millimeter and performance-per-watt basis. We'll just have to see what the performance landscape looks like when the company finally launches the part.

Cherry Trail will be short lived
As with Bay Trail, Cherry Trail doesn't quite have the level of integration that its competitors have. If you'll notice, at Intel's investor meeting, it only mentioned Cherry Trail once in its 2014 roadmap, shown here: 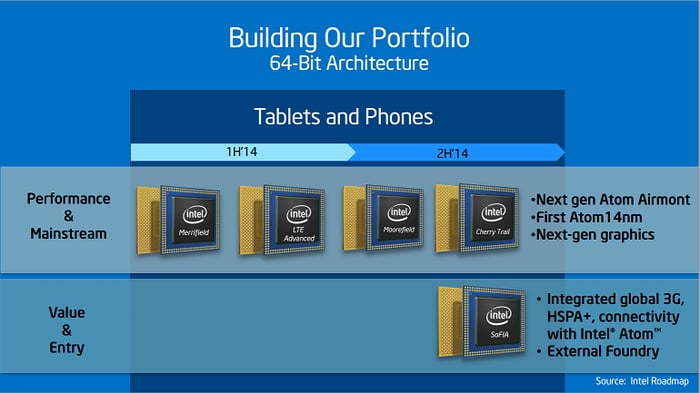 However, when the discussion turns to the high-end 2015, Intel talks exclusively about Broxton:

Further, as far as cheap PC chips go, Intel seems to transition directly from Bay Trail to Broxton, not even mentioning Cherry Trail: 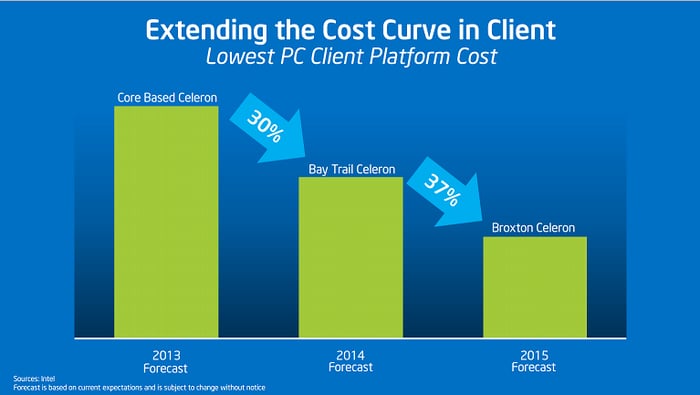 It's clear that Intel wants to get to Broxton as quickly as possible.

Foolish bottom line
While Intel's upcoming Cherry Trail should be a nice, small-die-size part for performance tablets in late 2014/early 2015, Intel seems to be very keen on transitioning to its more integrated/higher-performing Broxton platform much more quickly than what Intel's traditional development cycle would normally dictate. This, unfortunately, means that the Airmont-based smartphone system-on-chip is getting the ax. But if it accelerates the introduction of the significantly better Goldmont-based chip for phones and tablets, then it could be the right strategic move, especially as Qualcomm and NVIDIA continue to move quickly.