General Electric (NYSE:GE) is quickly becoming a very big name in the newfangled Internet of Things market. Here's how.

At in investor conference last week, two GE executives -- Bill Fitzgerald and Kevin McAllister -- outlined how quickly the company is growing its collection and reporting of massive data feeds. As it turns out, airplane engines make extremely fertile ground for data collection and analysis -- preferably without human intervention, since the data dumps are just too huge to wrap our biological brains around.

GE's airplane engines recently started sending in operating data for further analysis. In 2013, GE collected information on 15,000 flights. At about 14 gigabytes of flight metrics per flight, all of this information would fit on a single consumer-grade hard drive.

Fitzgerald and McAllister are both vice presidents of different aspects of GE's aviation products division. In 2014, McAllister expects to see data from 3.4 million flights. That's a 340-terabyte haul, or roughly 170 of those two-terabyte hard drives.

In 2015, the data collection should grow to 10 million flights and 750 hard drives full of operational data. GE has 350 engineers working on analytics for this large and rapidly growing information trove, in conjunction with 25 airlines that have agreed to share this automatically collected information.

So GE is set to collect a a ton of data from its jet engines. (Technically, it'll take about half a metric ton of hard drives to hold the 2015 collection.)

That's great, but what's the big idea? "The question is," McAllister posited at the conference, "What do you do with it?"

As an example, McAllister showed a simple chart with real-world cost savings benefits: 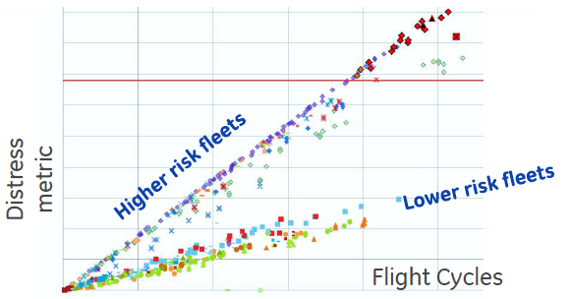 Looking at flight data from thousands of flights, GE found that an airplane working in a certain kind of environment would have a particular component that needed more maintenance. This type of pattern only emerges when there is a lot of data available to analyze.

And that's the real benefit -- cost savings on both ends of the analysis. High-risk flights will get all the maintenance they need in a timely fashion, while low-risk flights can stay in operation longer without taking maintenance breaks.

"That's time-on-wing benefits for our customers, that's higher reliability, and that's maintenance cost avoidance for us and for the customer base," said McAllister.

The Internet of Things may sound like a lot of hot air, but GE is already finding ways to save real money in these enormous data streams.

That's just one of GE's many data-intensive operations, and in the early days of large-scale analysis. There are similar implications for GE's locomotives, wind turbines, power plants... the list goes on and on.

Some of these benefits are GE's alone, but most of them extend to customers as well. The next time GE Aviation needs an edge in negotiations with a leading airplane designer, this data-based treasure trove could be the deciding selling point.

So, GE is smart to jump headlong into the nascent Internet of Things; it's a trillion-dollar trend in the making, and GE is already carving out a significant slice of that pie.

How Will the Internet of Things Help General Electric? @themotleyfool #stocks $GE Next Article
Current