Apple (NASDAQ:AAPL) completed its 7-for-1 stock split over the weekend, and Apple stock began trading at its new split-adjusted price on Monday. Investors cheered this change, as the stock promptly rallied 1.6% on a relatively flat day for the rest of Wall Street, reaching a new (split-adjusted) 52-week high in the process. 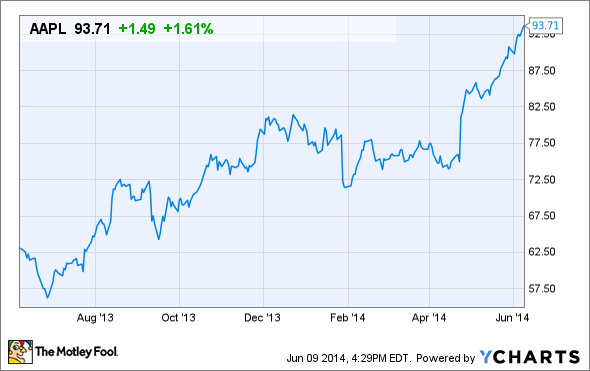 While nothing has changed from the perspective of Apple's business, many investors appear to find Apple stock more appealing at its new price for psychological reasons. Pundits have claimed that it will be easier for Apple to return to its all-time high (previously around $705; now a tad above $100) now that the stock seems more affordable to retail investors.

However, Apple's fate ultimately depends on its ability to grow earnings -- not the accounting gimmick of a stock split. Fortunately for Apple stock owners, the company has a few significant growth drivers coming in the next 2 years. This should keep Apple's earnings moving higher -- sending the share price well beyond $100 to new all-time highs.

A big iPhone product refresh
Apple's biggest near-term growth driver is the upcoming release of the "iPhone 6". There are a lot of open questions about how the iPhone 6 will differentiate itself from earlier iPhones and the Android competition. However, it is almost certain to have a bigger screen and incorporate some new features like near-field communications or wireless charging.

In fact, many tech analysts have commented that Apple will likely release two new big-screen iPhones this fall: one with a 4.7" screen and a "phablet"-type device with a 5.5" screen. While there's nothing inherently better about a bigger screen, Apple's lack of a big-screen phone put it at a disadvantage because Android phones are available in a large variety of sizes.

Two years ago, investors got excited about the iPhone 5's ability to drive a strong upgrade cycle. Indeed, Apple's revenue rose 9% in its last fiscal year, largely on the back of the iPhone 5. However, Apple stock plummeted because investors were blindsided by the corresponding 5 point drop in Apple's after-tax profit margin (from 26.7% to 21.7%).

This time, most investors understand that the iPhone 6 introduction will cut into Apple's profit margin initially. As a result, it is less likely that Apple stock will endure a repeat of its 2012-2013 slide from more than $700 to less than $400.

However, the initial boost Apple received from adding China Mobile pales in comparison to the long-term opportunity to grow sales in China. There are 3 major factors that will cause Apple's sales on the China Mobile network to skyrocket in the next couple of years.

The iPhone 5c may become a big seller at China Mobile as its price comes down (Photo: Apple)

First, China Mobile will be rolling out LTE service in additional cities in 2014 and beyond, increasing the iPhone's utility. Second, Chinese consumers have fallen in love with phablets, so the iPhone 6 is likely to be far more popular in China than the 5s. Third, Apple reduces the price of old devices each year -- so the LTE-equipped iPhone 5c will become a more viable option for the Chinese middle class with each new product cycle.

Entering new product categories
Apple's last main growth driver is its entry into new product categories. The "iWatch" is the most-hyped of Apple's potential new products. This would most likely be an iPhone accessory that allowed users to access some smartphone functions without having to pick up the phone. It may also add some fitness or health-related capabilities.

Given the still-large contingent of Apple doubters who claim that the company lost its innovation edge as soon as Steve Jobs died, releasing a successful product in a new category could make investors more excited about Apple stock.

That said, the "iWatch" -- or any other new product -- will have a modest impact on earnings for the foreseeable future. For example, tech analyst Steve Milunovich thinks the iWatch would provide an EPS boost of about 2% in FY15 and 4% in FY16. That makes it less significant as an EPS growth driver than Apple's share buybacks.

As a result, Apple stock has plenty of room to run beyond the $100 mark in the next couple of years. Indeed, if Apple manages to grow EPS at a double-digit rate for the next 2 years -- which is definitely achievable -- and the company holds on to its current multiple, Apple stock could surpass $120 by this time in 2016. If its multiple expands, the gains for Apple shareholders could be even more impressive.