The latest update to the Google (NASDAQ:GOOG) (NASDAQ:GOOGL) search algorithm, Panda 4.0, has had quite an impact on the web. With Google serving as the main conductor of traffic around the Internet, changes to its search algorithm can drastically affect businesses.

Meanwhile, YP's frenemy, Yelp (NYSE:YELP), is absent from the list of websites affected by the new Google search algorithm. Why was Yelp spared while Panda 4.0 tore YP apart like a bamboo shoot? Is Yelp at risk too?

Why Panda took a bite out of yellowpages.com
Google's goal with Panda is to help reduce the number of search results with thin, non-authoritative content, while promoting those sites that offer significant value to its users.

It's hard to argue that YP doesn't have authority over the local business information category. The company has been in the yellow pages business for years under AT&T and SBC before then. The website yellowpages.com has been around since 1996.

The problem is that there are a lot of Internet yellow pages, and yellowpages.com is arguably inferior to many competitors. With websites like Yelp and Angie's List (NASDAQ:ANGI) providing superior products by engaging with consumers better, YP is losing ground to the competition and Google is taking note. There's simply not a lot of content on yellowpages.com that can't be found elsewhere.

There's no evidence showing that YP is using spammy tactics to generate links back to its site. However, the number of backlinks to yellowpages.com is significantly lower compared to Yelp.

How important is Google to Internet yellow pages
Yelp doesn't hide the fact that it's heavily reliant on Google for traffic. YP's website is no different.

Google, meanwhile, has the potential to throw a wrench in the whole thing. The company has been making steady progress on its own local search products, harnessing the power of its Google Plus network to source original reviews and ratings of businesses.

Indeed, the industry's heavy reliance on Google makes algorithm changes like Panda 4.0 extremely meaningful to companies like YP and Yelp. More importantly, however, both companies need to focus on diversifying from Google and increasing the power of their brands. 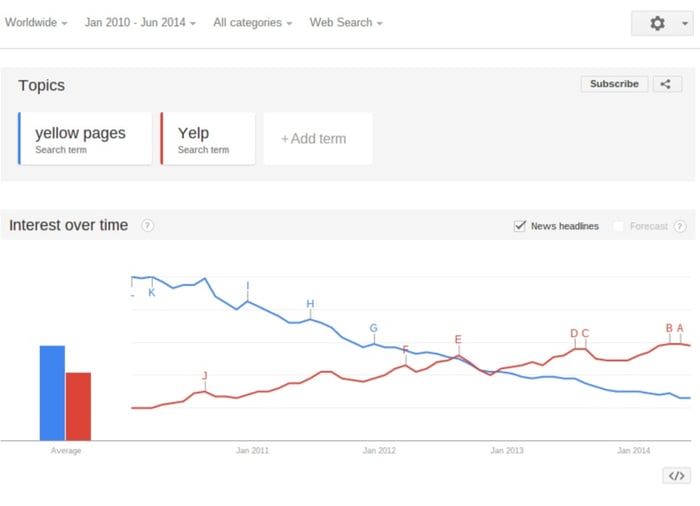 Yelp is doing a great job of positioning its brand as the place to go online for local business information. YP, as a result, has fallen out of favor. This means YP is more heavily reliant on organic search results to drive traffic to its site, whereas Yelp can rely on certain visitors typing in the "yelp.com" address directly.

Moreover, Yelp has taken steps to diversify away from Google. The company announced partnerships with Yahoo! earlier this year to provide local search results for the search engine. Additionally, the company works with Apple to provide local business results in its Maps application, which is built into the millions of iPhones used every day.

While YP has the support of its parent company, AT&T, it lacks the strategic partnerships Yelp has with more consumer-facing products.

Avoiding the same fate as yellowpages.com
For whatever reason, yellowpages.com fell out of favor at Google with the latest algorithm update. To be sure, the company will see a decrease in traffic due to the decline in visibility on Google and its heavy reliance on search engine traffic.

This risk isn't unique to YP, of course, as the entire Internet yellow pages industry relies heavily on search traffic. Yelp and Angie's List are also very dependent on Google for traffic. Yelp, however, is taking the necessary steps to establish its brand, generate valuable and unique content, and diversify its risk from Google.

While no one can say for certain that Yelp is safe from Google, it's certainly in a better position than YP.