May wasn't easy on Manitowoc (NYSE:MTW) investors as the stock crashed 15%, ending its six-month winning streak. The bloodbath began right after the crane maker reported shockingly bad first-quarter numbers in early May even as Caterpillar (NYSE:CAT) improved its outlook on the back of a stronger than expected quarter.

Interestingly, investors appear to have forgotten that bad quarter in a jiffy -- Manitowoc stock tacked on 8% in the first trading week of June. Analysts aren't pressing the panic button on Manitowoc, either. Morgan Stanley, for instance, reiterated its overweight rating on the stock a couple of weeks back.

But wait: Morgan Stanley also removed its earlier price target of $36 on Manitowoc. Does that suggest limited upside in the stock from here, especially considering that it's already up 26% year to date?

Where Manitowoc failed investors
Expectations for Manitowoc ran high after Caterpillar's first-quarter construction equipment sales jumped 20% year over year. Unfortunately, Manitowoc's first quarter had disappointment written all over. Crane sales slumped 14% year over year, crane operating margin slipped 1.5 percentage points, and it turned in an $8.8 million loss versus a profit of $10.4 million a year ago. That Manitowoc left its outlook untouched despite Caterpillar doubling its full-year sales projection for construction equipment to 10% didn't help.

But let's give Manitowoc the benefit of doubt and not consider that offbeat quarter as a harbinger of things to come. With its first-quarter backlog improving 47% sequentially, Manitowoc's revenue should improve from here. Investors can also take a cue from Caterpillar's recently released retail sales numbers and remain hopeful: the heavy-equipment maker's worldwide construction equipment sales climbed 6% for the three months ended in April.

So if construction markets are running strong, why should Manitowoc, or its shares slow? The key here is its food service equipment business.

Live cooking at the Manitowoc Foodservice booth at the NRA Show. Source: Manitowoc

Encouraged by the positive response to Manitowoc's newly launched products at the show, Morgan Stanley confirmed its rating on the stock. But what the research firm said in its report could make investors jittery:

However, we would not read too much into this, given that MTW's Foodservice core growth has been in the 8-9% range throughout the past two quarters already, and this tends to be unsustainable in the Foodservice business, where cross-cycle industry growth tends to sit in the 3-5% range.

What you should know
Going by Manitowoc's own projections for the full year, Morgan Stanley is right to be cautious. The company expects its food service equipment sales to grow only "mid single-digit percentage" points for the full year despite the 9% growth in the first quarter. Simply put, growth will likely taper as the year progresses.

That doesn't sound good, considering that the food service business accounts for nearly 40% of Manitowoc's total sales. But investors should also understand that any slowdown will result from macro factors that are out of the company's control.

One of Manitowoc's award-winning products on display. Source: Manitowoc

Bumpy ride ahead?
That said, there's no denying that Manitowoc's food service sales are closely tied to the health of the restaurant industry. While the National Restaurant Association projects industry sales to hit a record $683.4 billion this year, the growth rate has slowed, as evidenced by this chart: 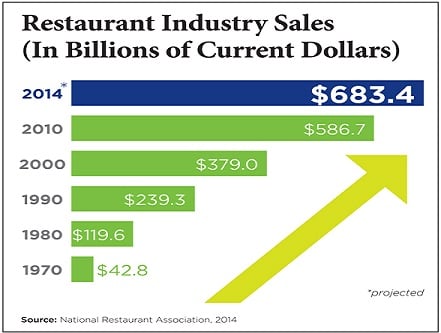 So Manitowoc's growth depends as much on consumer purchasing power as on manufacturing activity.

Considering that the stock is trading at a wide premium compared to the company's peers -- 33 times earnings versus Caterpillar's valuation of 18 times earnings -- much of the optimism about the construction markets may have already been baked into its stock price. And the restaurant industry has yet to see the kind of growth that one would expect following the recession, so Manitowoc may need stronger catalysts to justify the ongoing rally in its share price.