Please ensure Javascript is enabled for purposes of website accessibility
Log In Help Join The Motley Fool
Free Article Join Over 1 Million Premium Members And Get More In-Depth Stock Guidance and Research
By Matt Ellis - Jun 13, 2014 at 7:32AM

More studies are emerging that show online piracy boosts sales through publicity, but these virtual swashbucklers are being hunted by the ones they help most.

Pirates ... Swarthy thieves or suave ad-men? While it's difficult to calculate how much is lost in illegal downloads versus how much is gained in free publicity, many studies are trying, and the results are favoring the Don Draper model than the Black Bart one.

Online piracy is a hot topic lately, after the May 31 arrest of Peter Sunde, one of the "captains" of the nefarious Pirate Bay file-sharing site. After a two-year, worldwide manhunt from Interpol, this Swedish business innovator/scourge of the web (depending on which side of the dubloon you're looking at) was caught in his native country and sentenced to eight months in prison for copyright infringement.

The arrest comes only a week after Torrentz, a similar site based in the UK, was shut down by the London City Police and the Intellectual Property Office, reports the Daily Mail.

But when film and music companies took Sunde away from the web and into the courtroom, were they only hurting themselves? Some studies suggest so.

The positives of piracy

Last year, economists from the University of Munich and the Copenhagen Business School updated their controversial paper (Piracy and Movie Revenues: Evidence from Megaupload; A Tale of the Long Tail?), which documents their research surrounding the 2012 shutdown of Megaupload -- one of the largest file-hosting sites of its time -- and its effect on box office revenues after its closure.

If we are to believe what the media giants tell us, the shutdown of Megaupload should have resulted in a huge revenue spike for the film industry -- people would flock to paid alternatives once the illegal ones dried up.

But the results of the study, when you strip away economics formulas, show that illegal downloading -- at least from Megaupload -- actually helped small- and medium-sized companies such as AMC Networks (AMCX -3.04%) and only marginally hurt large companies like Twentieth Century Fox (FOX) ... and even then, mostly in countries where Megaupload was not popular.

Another study, conducted by the London School of Economics and Political Science, shows a similar trend for the music industry. Examining overall sales, the paper proves that the music industry maintained a healthy growth over the last 15 years in the presence of Napster, Pirate Bay, and Megaupload.

Considering the years in which online piracy became popular, there's even evidence to suggest the illegal downloads gave the music industry a boost. Some of the confusion comes from the drastic decline of CD and vinyl sales, which was predicted independently of piracy due to the crushing wheel of progress, in this case digital recordings. But the increase in online sales and concerts more than makes up the loss. 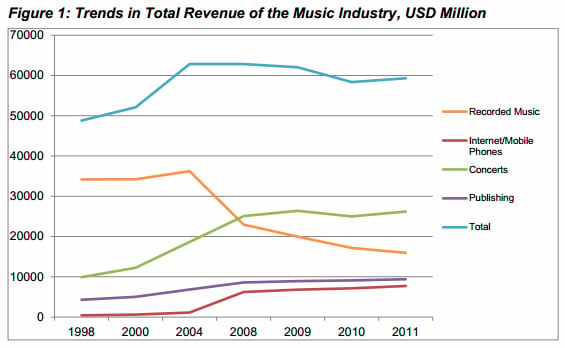 It's a strange concept to grasp -- the more people steal from a company, the more money it makes.

The theories all point to free advertising and publicity, and it looks something like this: you're a fine, law-abiding citizen who pays for every song and movie you enjoy, and I'm your scumbag friend who downloads everything illegally and hasn't paid for entertainment since the '90s. Naturally, thanks to my loose budget constraints, I watch a lot of films and TV shows and listen to more music, and consequently I've developed a "sophisticated palette" for these types of things. Every time we talk, I recommend some new and exciting piece of entertainment I've experienced, and if I whet your appetite, you go out and pay money for it, outside of your normal entertainment expenditures. Furthermore, because of my devil-may-care charm, I have many other friends, all of whom I inadvertently encourage to pump money into the system.

This is not news to the forward-thinking executives in the industry. Many of the people behind Game of Thrones speak positively about their status as the most pirated show on the Internet. As the Verge reports, series author George R.R. Martin called it "a compliment," show director David Petrarca credited it for creating a "cultural buzz," and even the CEO of Time Warner (TWX), owner of HBO, says "that's better than an Emmy."

As one might expect, not everyone is buying into this pro-piracy propaganda. Kate Bedingfield, vice president of corporate communications for the MPAA, rebukes the University of Munich/Copenhagen Business School paper, and points to another study on Megaupload's shutdown conducted by Carnegie Mellon.

The Carnegie Mellon paper suggested an increase of 6%-10% in film studio revenue as a result of Megaupload's removal. However, Buzzfeed reported that this paper was having difficulty with the peer-reviewed academic journals, not to mention online criticism. Why is a study from such an accredited university as Carnegie Melon having its validity questioned? The study comes from an initiative partly funded by the MPAA, which also provided the data.

Given the dubious nature of piracy, it's nearly impossible to find data substantial enough to accurately determine if the publicity is worth some downloaders' free rides. Perhaps the best way to understand it is to paraphrase Oscar Wilde's famous quote on gossip: "There is only one thing worse than being download illegally, and that is not being downloaded at all."