Like other real estate, Las Vegas is about location, location, location. But it's also about the markets you serve and the quality of your offering. Wynn Resorts (NASDAQ:WYNN) operates a resort in Las Vegas that's closer in proximity to MGM Resorts' (NYSE:MGM) Circus Circus resort than to Caesars Entertainment's (NASDAQ:CZR) flagship Caesars Palace, but they serve very different clientele and generate very different profits.

Follow the cash in Las Vegas
It's no secret that high-income earners have done better in the U.S. economy over the last decade than the middle class and one place the trend is showing up is Las Vegas. You can see by the chart below that high-end resorts have vastly outperformed low-end or mid-level resorts. 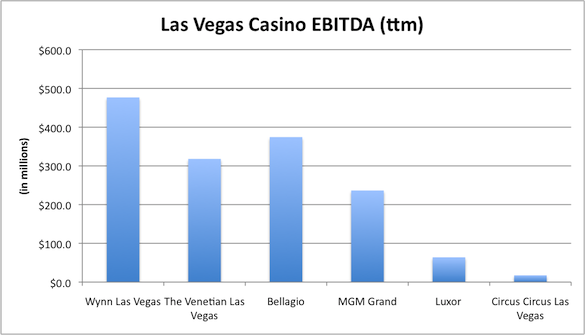 Wynn, Las Vegas Sands' (NYSE:LVS) The Venetian, MGM's Bellagio, and Caesars Palace are arguably the four highest-quality resorts overall, and they're also the most profitable (although exact numbers on Caesars Palace aren't available). On the other end, resorts like Circus Circus, Monte Carlo, and Excalibur are barely profitable for MGM.

Caesars doesn't publish specific resort data but it owns the largest group of low-end resorts with Flamingo, Harrah's, Rio, The Quad, and Bally's all being among the lowest table limits and room rates on the Strip. In fact, when you add all of its resorts together, the company generated just $887.2 million in EBITDA last year in Las Vegas, less than double what Wynn did from a single resort.

What it means to investors
Stronger results than competitors in Las Vegas isn't a reason to buy Wynn Resorts or Las Vegas Sands, but it's icing on the cake for the two companies who generate most of their revenue in Macau.

This is more of a look into how bad conditions are for Caesars Entertainment and where MGM Resorts stands versus competitors. Caesars is a stock I'd avoid at all costs given weak results and a $21 billion debt load, more than that of any of its competitors. MGM is only a good stock because of its leverage and upside in Macau, where it's building a second resort. Without that, it would only be in a marginally better position than Caesars.

Location is key in gaming, but serving the high end of the market has proven to be where the profits are. There's just too much competition on the low end, and when you're competing on price, profits are going to suffer as a result.