Nathaniel Calloway
(ntcalloway)
Author Bio
Nathaniel Calloway is a biomedical scientist and fool since 2014. He focuses on the pharmaceutical industry across all market caps, with a special focus on clinical leads and regulatory impact.

Based purely on financial metrics, Taro Pharmaceuticals (NYSE:TARO) looks like a great investment.

Taro is Israeli generic and branded pharmaceutical maker focused primarily on dermatology and skincare that has been undergoing unprecedented growth in the past 5 years. Its powerful revenue growth translated to an incredible EPS growth rate of to $8.14 per share. Compare this to Teva, the Israeli generics giant, with an EPS of $1.45 in 2013 and negligible EPS growth in the past 5 years.

Taro's historical P/E ratio is 15, which is low for the pharmaceutical industry, and nearly half of Teva's 28.  But perhaps the most striking number in Taro's books is its net cash on hand: $533 million or $11.89 per share. 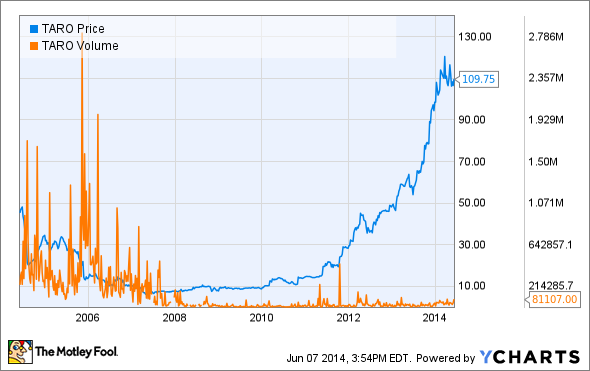 As its stock price rose over 1000%, its trading volume downright flat-lined. Even the outstanding price point of Taro is strange. There's something the numbers aren't capturing. And that something is a generics company called Sun Pharmaceuticals.

Sun wants Taro and doesn't want to pay
It's been no secret that Sun has had its sights on Taro, and it has a history of utilizing a variety of financial maneuvering to ensure that each share they buy is below market price. In 2007 they initiated a takeover agreement that ensured a purchase price of $7.75 a share, or a negative premium of 24%.

Stockholders revolted and the board reneged on the agreement resulting in a protracted legal battle that resulted in Sun acquiring a controlling stake. Sun's openly hostile attitude toward minority interests lead to the widespread buy-up and hording of any floated shares by everyone involved resulting in the dramatic drop in volume shown above. Sun has since had a second failed merger attempt with a negative premium, and Taro initiated a reverse Dutch auction using its own cash to buy shares below-market.

Even more aggressive
Although these actions haven't achieved Sun's goal of outright ownership, they have been able to consolidate their power on the board of directors. In response, some of the hedge fund minority shareholders initiated a fao;ed movement to unite all the minority shareholders to help oust some fraction of the Sun leadership from the board and protect their shares from being undersold.

Upon further investigation, minority interest BlueMountain Capital discovered that Sun's investment bank Brown Brothers Harriman, or BBH, had voted with over 3 million shares not belonging to Sun, and that these votes were registered as disinterested votes in a potential violation of Israeli law. A followup meeting to address the irregularities failed to ratify BlueMountain's recommendations, but BlueMountain is suing nonetheless because it appears that Sun may have been hiding shares at BBH to utilize Israel's minority friendly shareholder laws.

The bottom line
So why is Taro not one of the best buys in pharma? Because Sun Pharmaceuticals has been deliberately poisoning the water for years and depressing share prices with threats of forcing repurchasing at below market, allowing them ironically to purchase these shares on the market for a steal.

As it stands, approximately 50% of Sun's free cash flow is tied to their stake in Taro, based on Sun and Taro TTM data and Sun's 69% stake. Their plan is working and perhaps the saddest part is that giant pile of cash that Taro is sitting on.

Instead of capital expenditures or a dividend, I think the cash will be used to increase Sun's stake by reducing the number of shares outstanding. Many people have lucked out because Taro's meteoric growth has outstripped Sun's ability to suppress the price, but by my estimation, quite a few were lucky that the last merger didn't go through. In the end, I'm not confident in Taro's future -- so I'm definitely staying far away.