For most of the time since it joined the Dow Jones Industrial Average (DJINDICES:^DJI), Nike (NYSE:NKE) has been an outperformer, but the stock fell to underperform status after reporting a 7% drop in first-quarter earnings. 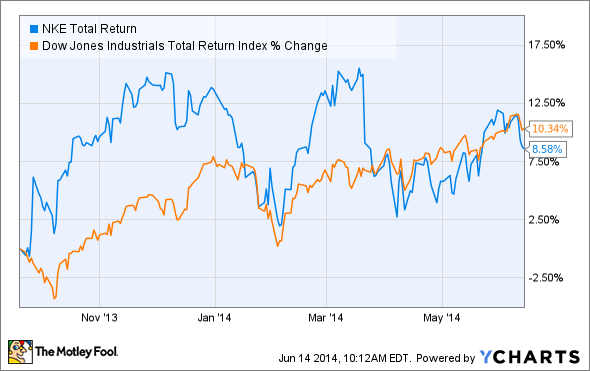 One of the reasons was increased advertising spending in advance of the World Cup, which started this week. For Nike, events like this are a part of their long-term strategy of dominating the sports landscape.

How Nike has taken over sport
Nike hasn't been a soccer powerhouse forever. It didn't even enter the soccer market until 1994, part of a slow and steady expansion of its end markets. Today, it's one of the top two soccer companies, battling Adidas for eyeballs at the World Cup.

Nike's retail presence has grown to showcase its brand.

The expansion strategy Nike used to get into soccer is something its done in other sports as well. It sponsors high profile athletes to gain legitimacy and uses its marketing muscle to push products into new markets around the world.

In soccer, it sponsors Cristiano Ronaldo, Neymar, and Wayne Rooney just to name a few, bringing exposure to the brand. It also is making the jerseys for the U.S., Portugal, England, Brazil, and others.

All of that marketing spending ahead of the World Cup will eventually drive its way to sales, and on that front Nike is doing very well. While net income was down in the first quarter, revenue was up 6% to a record of $1.17 billion.

As the year goes on, World Cup spending will subside and profits will rise. That's what fuels Nike's dividend of $0.24 per share per quarter. What investors need to keep an eye on with dividend payouts is that the core business is healthy and growing. In Nike's case, it's investment in sponsoring events like the World Cup and the players in it that drive dividend payments long-term.