After struggling to keep up with investors' lofty expectations, Apple stock finally seems to have regained the confidence of the investing community of late. 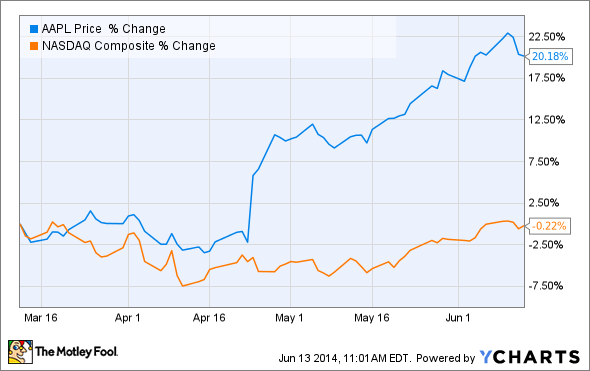 We Fools have largely been fans of Apple stock for years, seeing its recent lows as an opportunity, rather than a risk factor, to snap up shares of one of the most innovative companies in the world at bargain-basement prices. And now as Apple faces another uptick in growth with a highly anticipated second-half product cycle, let's look at which of Apple's two most talked about new products presents more opportunity for Apple investors in the months ahead.

Growth driver No. 1: Apple iPhone 6
Make no mistake: Apple's iPhone 6 will be a huge growth driver, plain and simple.

One of the key reasons here lies in understanding Apple's current installed base of iPhone users. According to some recent work from researcher Kantar, Apple's overall installed base breaks down the following way in two of Apple's most important markets, the United States and China:

And while this won't be perfectly representative of other key regions -- like Europe, for example -- the important takeaway is that a healthy portion of Apple's installed iPhone base is poised to upgrade. The likelihood of a huge iPhone 6 upgrade cycle becomes all the more likely in light of Apple's recent announcement that it will end support for the iPhone 4 for its recently unveiled iOS 8.

Some sell-side analysts have predicted that because of that factor and Apple's now-broader carrier network, Apple could see 20% incremental growth in iPhone 6 shipments over iPhone 5s shipments. This is admittedly fuzzy math here, but looking at Apple's most recently filed 10-K, 20% overall iPhone growth would translate into $109 billion in iPhone growth, a likely low-ball estimate since these are 2013 iPhone shipments. Either way, the point should be apparent enough: There's big, big money on the line for Apple in Year 1 with the iPhone 6.

Growth driver No. 2: Apple iWatch
Apple's other most talked-about growth catalyst is its highly anticipated iWatch.

While it's certainly harder to predict just how many iWatches Apple will sell, since there's zero historical precedent for the product line, unlike the iPhone 6, that clearly hasn't stopped the analyst community from trying.

Recently, BMO Capital Markets equity research issued an analysis arguing that Apple will probably sell its iWatch to 10% of Apple's iPhone installed base in 2015, which translates to some 33.5 million iWatch shipments in Apple's FY 2015 alone, with a massive growth runway ahead of its in the years to come. In terms of financial ramifications, that 10% penetration rate would translate into $8.4 billion in fresh revenue for Apple and would drive EPS growth of 3.1% at BMO's assumed iWatch assumed price and margin levels.

An embarrassment of riches for Apple stock
Ultimately, which product is bigger doesn't matter all that much. Sure, Apple investors need to understand which new products present the greatest opportunity for Apple stock. However, more broadly, the fact that both of these upcoming iDevices should ignite more growth for Apple stock is really the high-level storyline that will affect Apple stock the most. Specific products aside, the implication remains the same: Apple seems like a clear buy today.

iPhone 6 or iWatch: Which Product Will Be a Bigger Boon for Apple Stock? @themotleyfool #stocks $AAPL Next Article
Current