"Like virginity, a stable price level seems capable of maintenance, but not of restoration."

For nearly a decade during the 1980s, Warren Buffett was convinced that the American economy would never be able to escape the scourge of high inflation.

He was wrong on this count, obviously.

But what he got right was his response, as this error in judgment accelerated Buffett's embrace of the investment philosophy he's known for today and made shareholders in Berkshire Hathaway (NYSE:BRK.A) (NYSE:BRK.B) extremely rich.

Buffett and the scourge of inflation
If it's true that a person is the sum total of their experiences, then it seems impossible to deny that Buffett was deeply affected by the rapid price increases of the mid-1970s and early 1980s.

As you can see in the chart below, prices rocketed higher on two separate occasions. The first followed OPEC's 1973 oil embargo, which sent the price of oil from $3 per barrel to nearly $12 following the United States' decision to back Israel in the Yom Kippur War.

And the second, which topped out at nearly 15% in March of 1980, is generally attributed to an accumulation of imprudent monetary policy -- though, by the time it peaked, the Federal Reserve had already begun to aggressively counter the trend under the chairmanship of Paul Volker. 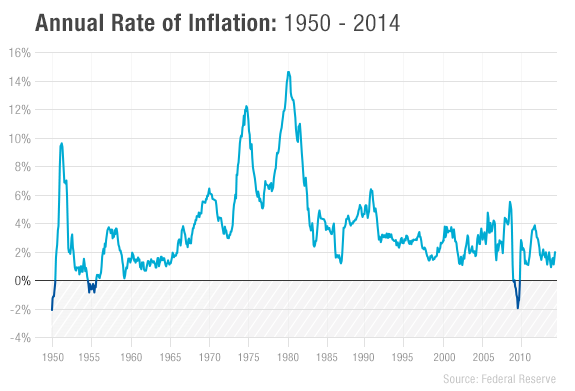 While high inflation is rarely good for business, it was particularly bad for Buffett given Berkshire's concentration in the insurance industry.

Insurance companies make money by collecting more in premiums today than they pay out in claims tomorrow. Consequently, because inflation weighs on the latter more than the former, it threatens to reverse this fundamental relationship.

On top of this, rapid inflation also erodes the return an insurance company earns from its investment portfolio -- which, oftentimes, is concentrated in fixed--income securities.

As Buffett observed in his 1979 letter to shareholders:

Just as the original 3% savings bond, a 5% passbook savings account or an 8% Treasury Note have been transformed by inflation into financial instruments that chew up, rather than enhance, purchasing power over their investment lives.

A mistake that didn't go to waste
It's with this as the backdrop that one begins to sense a transition in Buffett's investment philosophy from one focused almost exclusively on grossly undervalued securities to one that's equally cognizant of pricing power and competitive advantage.

Nowhere is this more apparent than in his 1981 letter to shareholders in which Buffett discussed the desire to buy businesses that "through design or accident . . . are particularly well adapted to an inflationary environment."

Such favored business must have two characteristics: (1) an ability to increase prices rather easily (even when product demand is flat and capacity is not fully utilized) without fear or significant loss of either market share or unit volume, and (2) an ability to accommodate large dollar volume increases in business (often produced more by inflation than by real growth) with only minor additional investment in capital.

The line between these characteristics and Buffett's later investments in companies like Coca-Cola (NYSE:KO) and Gillette couldn't be clearer, as companies like this preside over enduring brands, scalable business models, and the ability to raise prices without igniting a fatal backlash from consumers.

Indeed, while alternative histories are speculative by nature, it isn't unreasonable to conclude that Berkshire Hathaway's portfolio of common stocks would look completely different today if it weren't for this epiphany coupled with Buffett's pessimism in the 1970s and 1980s that stable prices were forevermore a thing of the past.

"Like virginity, a stable price level seems capable of maintenance, but not of restoration," Buffett wrote in 1981.

In hindsight, he was mistaken on this point. But also in hindsight, it's clear that Berkshire Hathaway's shareholders have been greatly rewarded by his flawed forecast.