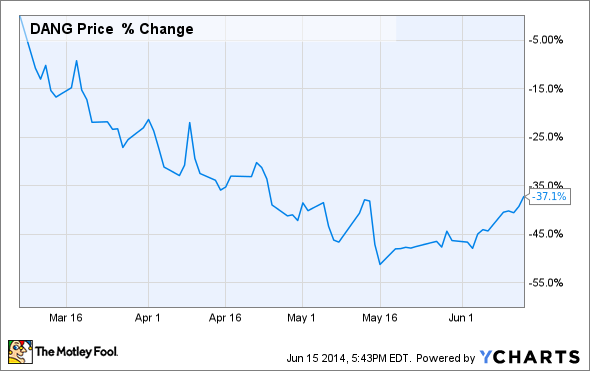 However, E-Commerce China Dangdang is still delivering impressive growth rates, and the company is attractively valued in comparison to Vipshop and JD.com, so recent weakness could turn out to be a buying opportunity for investors.

Down but still growing substantially
Investors seem to be disappointed with Dangdang lately, but that does not mean the business is stagnating. Far from that: Sales increased 30.1% during the first quarter of 2014 to $279.2 million.

Gross merchandise value was $190.8 million during the period, a big annual increase of 103% versus the first quarter in 2013. Dangdang has 8.6 million active customers as of the end of March 31, and it gained 2.8 million new customers during the last quarter.

E-Commerce China Dangdang is barely profitable, but margins are moving in the right direction: Gross profit margin was 18.2% of sales versus 17.2% in the first quarter of 2013. The company delivered a net income of $0.3 million in the quarter, versus a net loss in the same quarter during the prior year.

Dangdang started as an online books retailer, but it has successfully expanded into other areas over time, particularly into big product categories such as apparel, maternity, and home products, among others.

E-commerce is an exciting business with enormous potential for expansion all over the world, and China is a high-growth country; this means that Dangdang offers exposure to substantial opportunities years ahead. With sales growing rapidly and profit margins improving, Dangdang seems to be on its way to capitalizing on its abundant possibilities.

Vipshop and JD.com capturing most of the attention
Vipshop is firing on all cylinders on the financial front, and the stock is trading near record highs after rising by a mind-blowing 427% over the last year. Vipshop offers flash sales of high-quality and popular branded products at big discounts versus traditional retail prices, and it delivered rock-solid financial performance for the first quarter of 2014.

Vipshop delivered expanding profit margins during the quarter, and earnings per share came in at $0.63, comfortably above analysts' forecast of $0.48 per share. The way things are going for Vipshop, it's only natural for investors to love the stock.

JD.com is the new guy in town. The company had a very successful IPO on May 22, and it has been steeply rising since them. From an IPO price of $19 per share, JD.com has already gone to nearly $27.80, quite a remarkable performance over such a short period of time.

The company is an online retailer with a big presence in different product categories; management claims that JD.com has a market share of 46.5% in the Chinese market. But profitability is under pressure as JD.com is actively investing for growth, so it is still losing money at this stage.

The coming Alibaba IPO is generating plenty of expectation among investors, and this may be one of the reasons that JD.com is rising so much lately; this kind of association is quite usual, even if it is not entirely rational or sustainable.

Vipshop and JD.com are attracting most of the attention when it comes to e-commerce in China lately, so maybe investors are missing the fact that Dangdang is still generating considerable growth rates while trading at a lower valuation than its peers.

Foolish takeaway
While Vipshop and JD.com are as hot as it gets, investors seem to be underestimating Dangdang lately. But the company is still generating solid growth rates and expanding profit margins, and Dangdang looks attractively valued in comparison. Maybe it's a good time to place a bid for Dangdang.