Please ensure Javascript is enabled for purposes of website accessibility
Log In Help Join The Motley Fool
Free Article Join Over 1 Million Premium Members And Get More In-Depth Stock Guidance and Research
By Daniel B. Kline – Jun 17, 2014 at 5:59AM

The federal board is collecting information but has not pledged to take any action.

The Federal Communications Commission wants to know how much Netflix (NFLX -1.78%) is paying Comcast (CMCSA -3.62%) and Verizon (VZ -1.73%) in so-called "paid peering" agreements. These deals -- which became legal in January when a court struck down the net neutrality rules that forced all Internet traffic to be treated equally -- give the digital streaming company a promise of better service for its customers.

The FCC asked for and received copies of the agreements but Chairman Tom Wheeler has not pledged to take any action nor is he releasing them to the public. Currently, Ars Technica reported, he is only checking into whether consumers are actually getting the Internet access they are paying for. In many cases that has not been true for Netflix customers who have had to deal with slow access on many ISPs.

The digital streaming content company tracks ISP speeds in the United States. As you can see below as of January -- when it became at least quasi-legal to charge for decent access -- performance was poor on a number of ISPs -- including Comcast and Verizon. 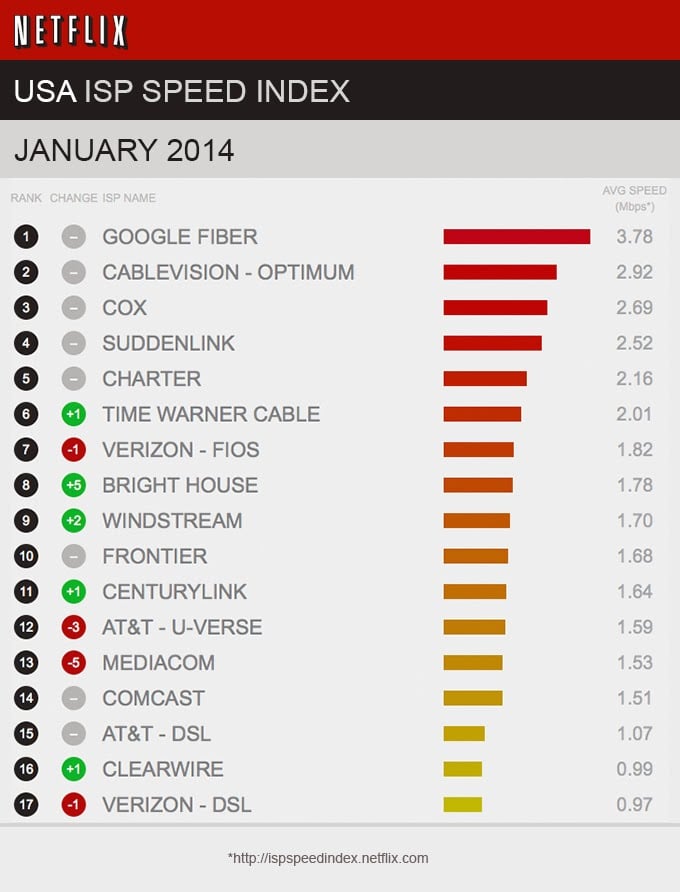 In making deals with Comcast and Verizon Netflix essentially is paying tor a direct connection to each ISP's users. The FCC, which currently supports formally legalizing these deals, appears to be wavering.

Netflix has been vehemently opposed to these deals even as it has made them in order to protect the user experience of its customers. The FCC had squarely been on the side of the cable industry -- not the public it supposedly represents. That has changed a little as a growing mainstream media tide (including HBO's John Oliver, which I wrote about here) has alerted people that the end of net neutrality could be very bad for everyone who does not own a cable company.

Now, Wheeler and the FCC have to at least pretend they are watching out for us regular folks and not simply doing the bidding of the Internet service providers and cable companies (who Wheeler used to work for as a lobbyist).

"Consumers pay their ISP and they pay content providers like Hulu, Netflix or Amazon.... Consumers must get what they pay for. As the consumer's representative we need to know what is going on," Wheeler said after an FCC meeting Friday. "I have therefore directed the Commission staff to obtain the information we need to understand precisely what is happening in order to understand whether consumers are being harmed."

Those might be the words of a man who was caught trying to pull one over on the public, but doing the right thing for the wrong reasons can still be good.

After the paid peerage deals were made between Comcast and Verizon and Netflix, service improved for Comcast users but not for Verizon's, according to Netflix's May speed chart. When the Comcast deal was struck in late February, ARS Technica reported, Netflix speeds became immediately better. Since the Verizon deal was made in late April, using Netflix has become an even slower experience for its customers.

"Verizon FiOS is down two slots and now ranks behind DSL providers Frontier and Windstream," Netflix posted on its blog after releasing its monthly speed index.

The Wall Street Journal reported that Verizon blames its poor performance on time.

Verizon said it plans to fulfill the terms of its agreement with Netflix over the next few months, according to the paper.

"We are working on the first 13 cities, and we do plan to have everything done in 2014," said Verizon spokesman Bob Elek. "All of this kerfuffle that is going on isn't affecting that."

Netflix certainly does not seem happy about the Verizon response -- it has been delivering messages to Verizon customers blaming the ISP for slow speeds. Verizon responded to Netflix's actions by sending the company a cease and desist letter, which I discussed with fellow Fools Jason Hellmann and Jake Mann on a recent edition of the Business Take videocast.

What is at stake here?

It's not simply about whether a large volume player like Netflix gets treated well. It's also about how any potential competitor to the service fares. Under the FCC's proposed rules, paid peerage would be legal as long as the same deals are made available to any company willing to pay. That sounds good but it puts a toll charge on being able to offer most customers decent streaming speeds and start-ups, or even established companies may not be able to pay.

And, of course, it's hard to imagine that any additional fees a company pays won't in some way be passed on to users. That means you will pay for Internet access and then pay again to support paid peerage deals forced by a service that already takes your money.

It's laughable that Verizon allegedly ransomed Netflix into making a deal by offering such a poor experience to the streaming service's customers that it had to pay but then couldn't deliver faster speeds.

ISPs saw the opportunity to add a rich new revenue stream and they are clearly willing to overlook the fact that their customers are paying them for access to the whole Internet -- not selective parts of it.

It's good to see the FCC stepping in even if the group's motives are hardly pure. Someone needs to protect the American public. It's not about whether you have glitches watching Orange Is the New Black. It's about whether the Internet remains a public highway open to any and all or a toll road that some can't afford to travel.

Daniel Kline has no position in any stocks mentioned. The Motley Fool recommends Netflix. The Motley Fool owns shares of Netflix. Try any of our Foolish newsletter services free for 30 days. We Fools may not all hold the same opinions, but we all believe that considering a diverse range of insights makes us better investors. The Motley Fool has a disclosure policy.

Netflix Originals: Why ‘Hemlock Grove’ May Be the First to Get Canceled