Jake Gilfix
(jgilfix)
Author Bio
Jake is a finance undergraduate from Bentley University with minors in Economics and Mathematics. He currently works as an investment analyst intern where he helps manage and develop investment portfolios. He is also preparing for his level 1 CFA exam.

The stock value of Trinity Industries (NYSE:TRN) has been up about 60% in the first five months of 2014, which has helped contribute to the 112% growth in price that the company has seen over the past 12 months. Findng itself in an industry ranked by Zacks to be in the top 10% of industries with best next-quarter performance forecasts, Trinity Industries can be considered a great growth opportunity that has already made strides to lead its competitors. 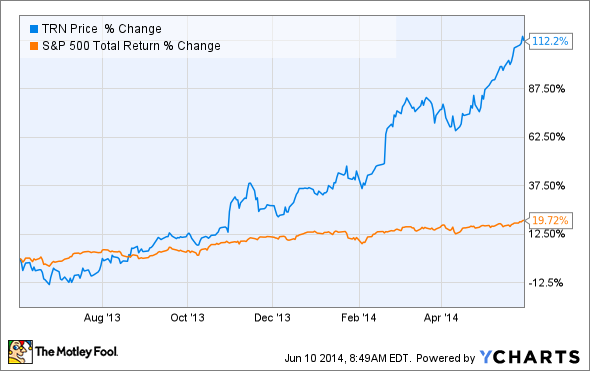 Company profile
Trinity Industries is a railroad service company headquartered in Dallas that provides services and products to the energy, transportation, chemical, and construction sectors. Currently it's the United States' largest rail car manufacturer with a market cap of about $6.44 billion, and it has been quickly growing, breaking its own record numbers through the development of the company's five subgroups: rail, leasing and management, energy equipment, inland barge, and construction products. Although the company has been leading its industry, it has been seeing fairly close competition from the likes of American Railcar Industries (NASDAQ: ARII), which has reported a significant growth in revenue and an increasing backlog of rail car orders over the past year.

Great stock value
Currently Trinity Industries has a P/E value of about 11.1, compared to an industry value of about 15.2. This means that the company is relatively undervalued compared to its industry competitors. The undervaluation of Trinity Industries can be backed by its PEG ratio of about 1.1, which means that the company's stock price is closely valued along the lines of its earnings performance. PEG ratios that are lower than one are usually signs that a company is undervalued relative to its earning growth because the market's expectation in price is lower than that of consensus estimates. Although Trinity Industries' PEG is slightly higher than one, it is still a good sign that the company is growing within the confines of its earnings estimates, and if it continues to impress with its earnings reports, the stock should still have plenty of room for returns.

Excellent earnings growth history
From the first quarter in 2013 to the first quarter in 2014, Trinity Industries' earnings per share grew from $0.99 to $2.91, accounting for an impressive 194% growth during that time period. In addition to producing an overall great earnings history during the past year, the company has also managed to beat estimates for an average surprise of almost 9% in the past four quarters.

Its 2014 first-quarter report shows that the five subgroups of Trinity Industries increased the overall company revenue by 57% from the first quarter of 2013. Managers credited this growth to higher shipment volumes and pricing because of an increased overall demand and more desirable product mix in the rail group, higher volumes in the energy equipment group, acquisitions in the construction products group, and higher rail car sales, fleet additions, and increased rental rates in the leasing and management group. The growth in Trinity Industries' subgroups is suggested to be attributed to a favorable increase in demand for rail cars and barges that cater to the oil, gas, and chemicals industries.

Opportunities and threats in the industry
The demand for rail cars doesn't seem to be slowing down either. An article from Bloomberg notes that from 2010 to 2013 rail cars that carry shale oil have grown in number from 50,000 to 700,000. In addition, current estimates expect that number to grow to over million cars within the next two years. Although this is great news for the railroad sector as a whole, it is even better for companies like Trinity Industries that provide the transport equipment to move the goods.

However, just as there are opportunities, there are also risks which may cripple Trinity Industries' future growth, such as the decreasing demand from the struggling coal industry and impending production threats like the potential relocation of refineries closer to shale fields.

The big picture
Trinity Industries has provided great opportunity to its investors over the past year; in perspective, there seems to still be more future opportunity in the company. It has already made strides to provide more value to its investors by increasing next quarter's dividend, which marks its 201st consecutive dividend increase, and it has approved a $250 million share repurchase program. However, the potential risk in the slowing of growth in the industry can't be overlooked and seriously should be considered because the factors involved could hurt the future of Trinity Industries.